Dorset sheep have been a favourite for Somerset breeder Joe Larder since he was a boy and the easily managed breed fits in perfectly with his work as a quantity surveyor.

Joe was as young as seven when he asked for some sheep as a Christmas present and his grandparents bought him two ewes and four lambs from the old livestock market in Taunton. 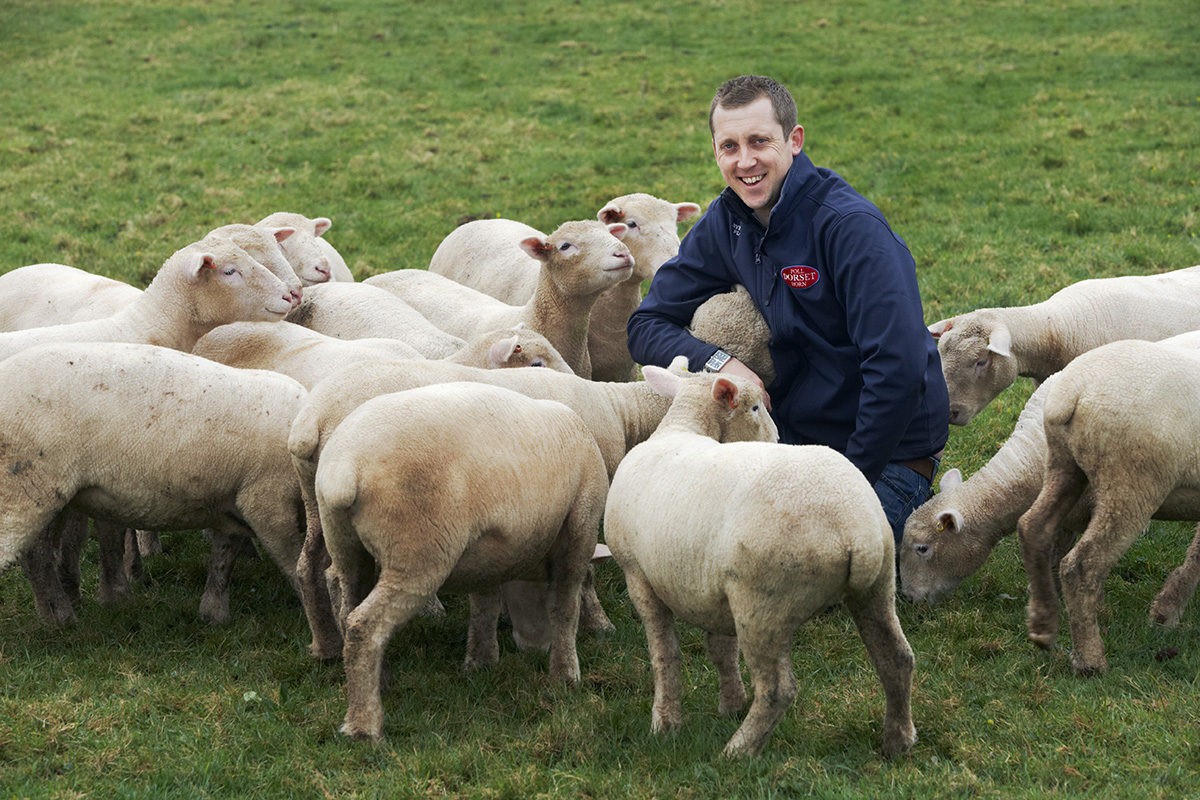 “I picked Dorsets at the time and my Dad said by the age of 11 I would be able to look after some pedigree sheep myself so he took me to the May Fair in 1998,” said Joe.

That year he established his Byeways flock of Poll Dorsets with five ewe lambs.

It now runs to 90 pedigree ewes and followers on his smallholding and rented land at Walden Acres, Sandford.

The initial purchases at the May Fair were from David Rossiter, Les French, Rob Hole and Adrian Dufosee and David loaned Joe a ram to run with his five ewes. 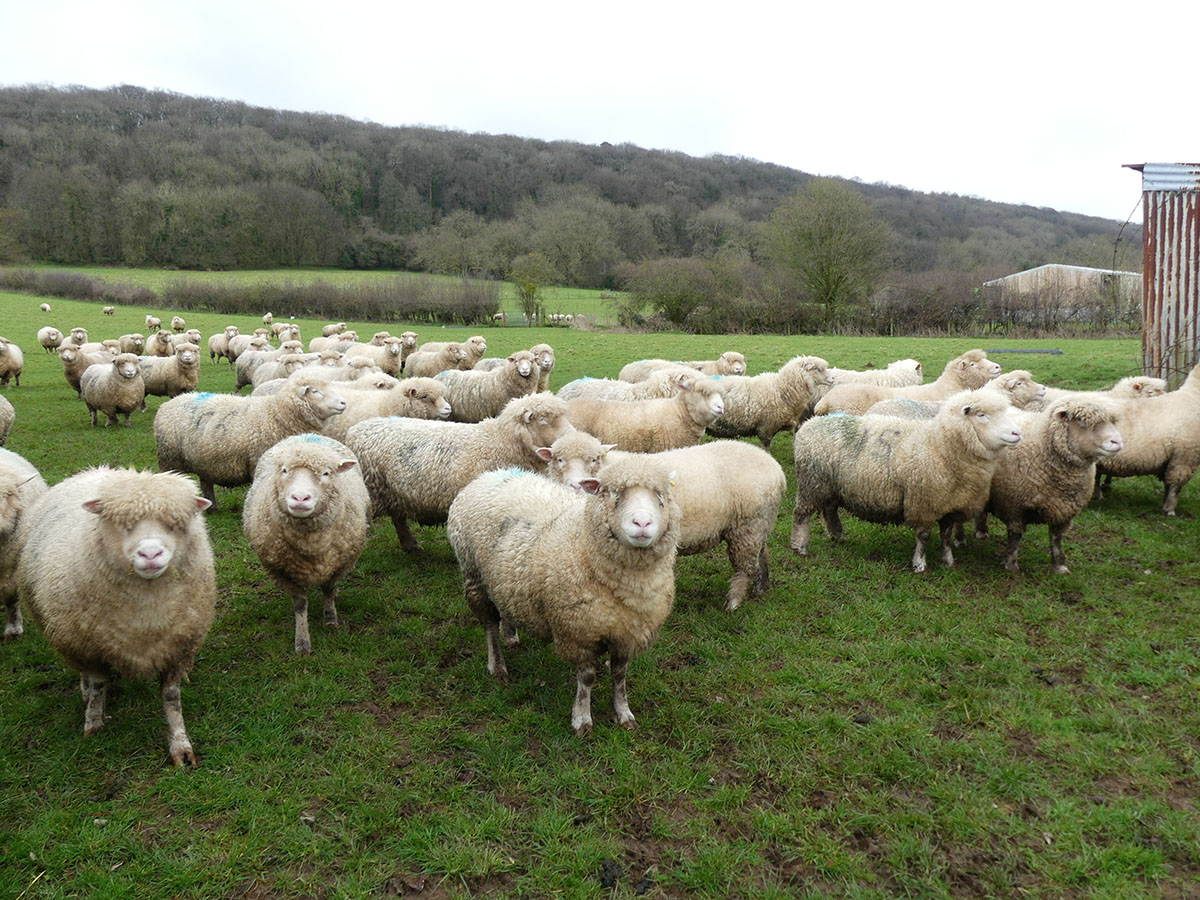 Joe worked for the family building firm for eight years before joining a south west groundworks company to train as a quantity surveyor. Now almost qualified after four years at the age of 30, his expanded Dorset flock dovetails with his work.

While not from a farming background, his late father Dave and his mother Wendy ran a herd of 10 pedigree Aberdeen Angus cows on the family’s 12 acre smallholding. When Dave passed away six years ago, Joe, Wendy and his wife Rachel, an English teacher at a local secondary school, decided to concentrate on the Dorsets to lessen the workload.

The flock has expanded to 90 ewes, around 80 of which are now home-bred with the remainder bought at Dorset Horn and Poll Dorset Sheep Association sales and dispersal sales. The latter have been run with a home-bred ram.

Such has been Joe’s success in developing the flock that it won the association’s overall national flock competition two years ago and it was Medium flock winner in 2011. Along with show success at local shows such as the New Forest and Hampshire, Gillingham and Shaftesbury and Mid Somerset. 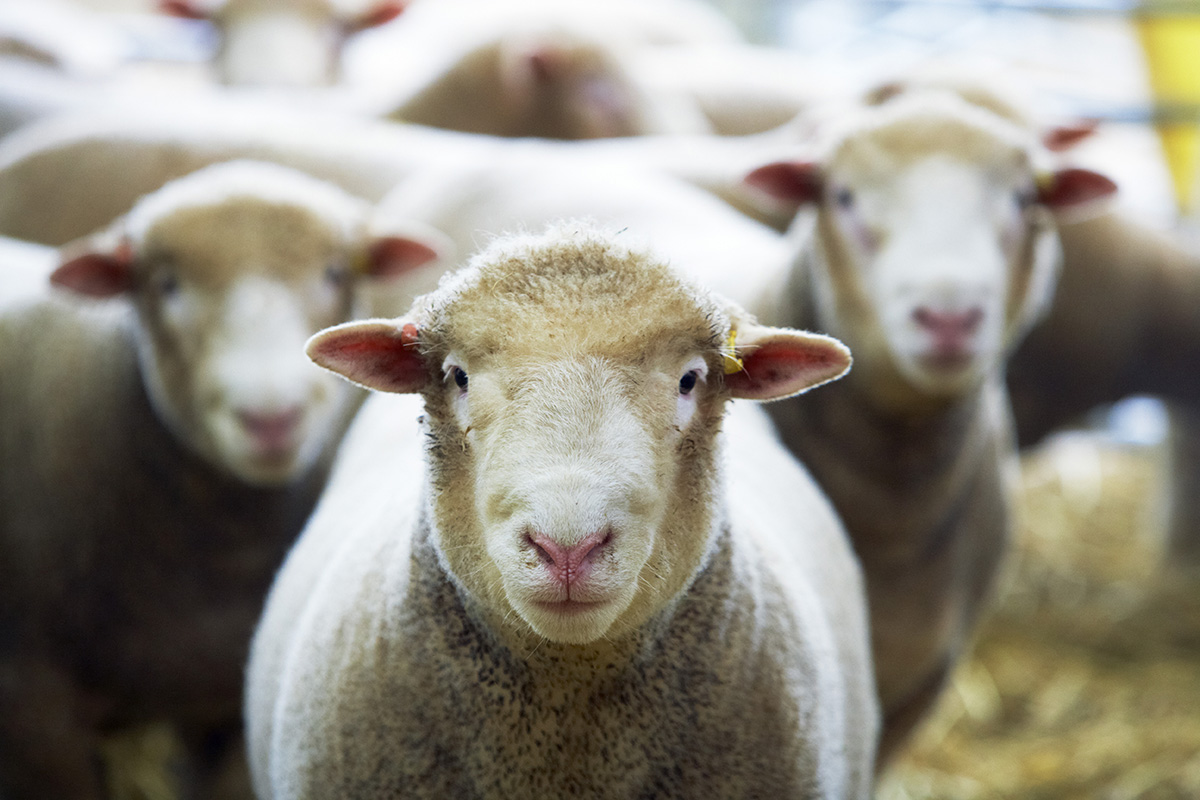 “In building up the flock, my focus has always been on getting the females right. I like to breed strong, compact ewes with strong heads and I want consistency in my females.

“I concentrate on the maternal traits of the Dorset breed which are their high milk yields, mothering ability and the ability to finish lambs at 35-40kg at any time of the year,” said Joe, who is a member of the association’s council. Over the years he has had a lot of support from the association and other Dorset breeders.

“A lot of people are looking to buy Dorsets - the breed is going from strength to strength. The beauty of the Dorset is it’s ability to lamb out of season and three times in two years if it suits the system,” he added.

“For me their fertility gives me a tight lambing which helps me fit it in with my job. As well as being very good mothers, they are quiet natured and don’t scatter when you go among them. There’s just something about them and they work for me. As a breed, they are very hard to beat. They look after us.” 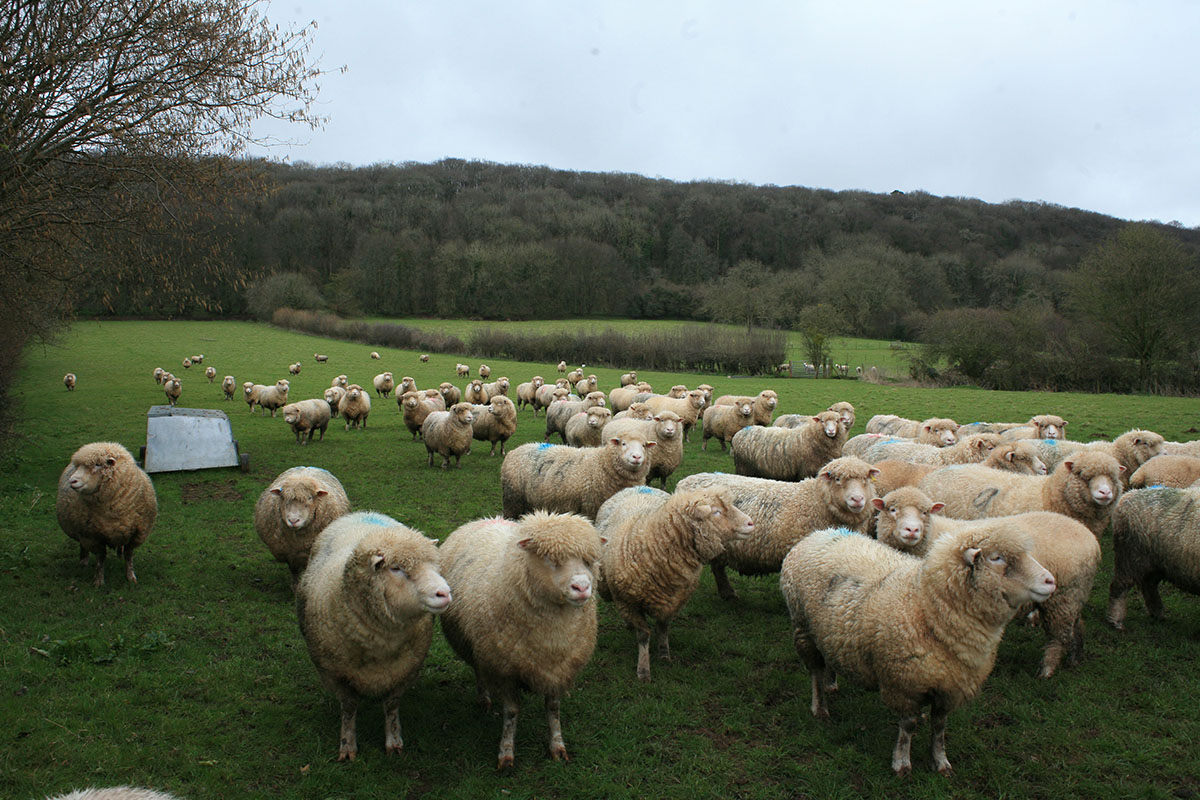 Joe says the Dorset’s mothering abilities also enable the ewes to play a key role as recipients in AI programmes.

The Byeways stock rams are put out on April 10th to lamb in September with only a handful lambing in December-January, the latter usually having been run with the most recently purchased stock ram for the second cycle. The ewes are drenched three weeks before lambing and given pre-tupping buckets to help fertility.

Last September around 80 ewes lambed within two and a half weeks. Joe likes to keep the lambing tight as he takes time off work. He is helped by Rachel and Wendy.

The ewes are lambed in a new shed near the house although they are run outside during the day for exercise. They require little assistance and achieve around175-180% lambing compared with 200% for an April lambing. 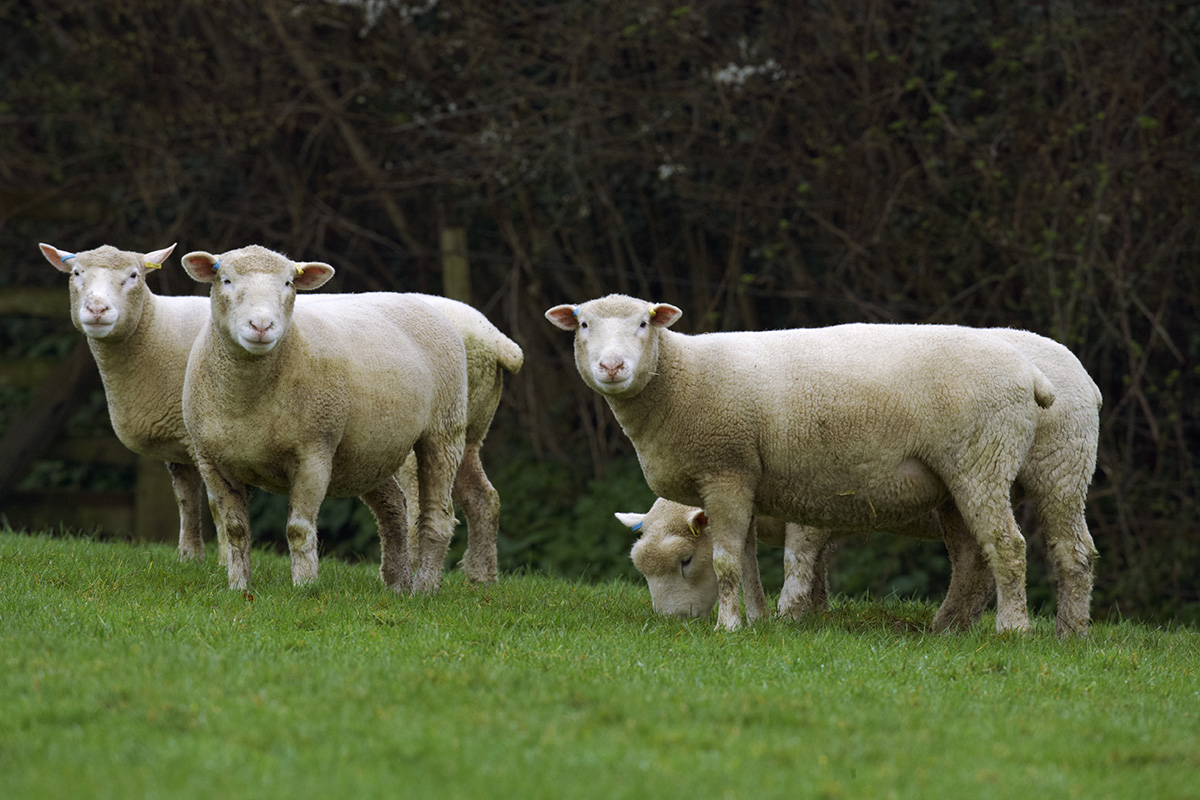 “September is a good month for grass here and the weather is also usually warm and fine. Our grazing is rich permanent pasture and the sheep do well on it.

After lambing the grass starts to deteriorate in quality and growth and the ewes are kept in groups of 15 and fed concentrate to help maintain milk yields which aids management and monitoring the sheep. Lambs are introduced to creep feed.

By mid-December the lambs are housed to finish them and to conserve grazing. Feed inputs are minimal. Ewes are given 18% ewe nuts once they have lambed.

Creep is 18% protein lamb pellets which is fed to the fat lambs at four to six weeks old. At weaning ram and ewe lambs retained for breeding are introduced to a course mix ration.

All the ram lambs are kept entire and any not retained for breeding along with females which don’t meet the breed characteristics have been sold finished on the Dorset Waitrose scheme for the last three years.

All were sold through the scheme which pays a premium for early Dorset lamb by mid-February at an average 43-44kg live - 19kg deadweight and classifying U and R at 2-3L for 90% of the lambs sent on with remaining 10% E grades.

During the first two months of the year the dry ewes are wintered away on 25 acres of keep. We have strong competition for land to rent in the area from dairy farmers and people with horses. 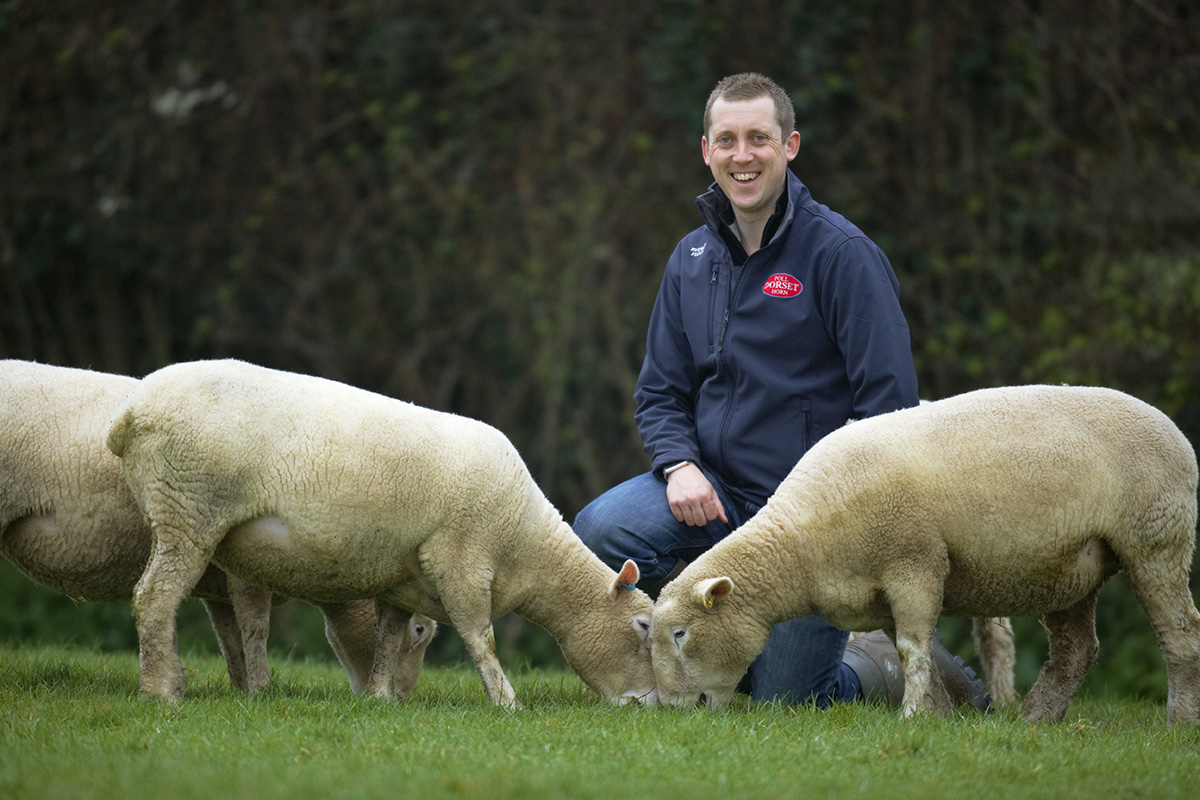 Each year 15 to 20 ewe lambs are kept for breeding with between 10 and 15 for replacements. The aim is also to sell six or seven shearling ewes at society sales.

Last year 45 females and 10 lamb rams were sold both at sales and privately, many to a growing number of repeat customers with pedigree flocks.

Ram Lambs are sheared in the third week in January and ewe lambs the first week in March with flock ewes sheared in early April pre-tupping.

While concentrating on the ewes, Joe also likes to invest in his stock rams and generally buys a new stock ram each year at the May Fair where he has paid up to 2,000gns for a ram lamb.
Each year 15 to 20 ewe lambs are kept for breeding with between 10 and 15 for replacements. The aim is also to sell six or seven shearling ewes at society sales.

Joe has been selling ram lambs at the May Fair since 2011 where they have made up to 800gns and he also supports other association sales at Worcester, Carlisle and Llandovery.

Joe shares his father’s enthusiasm for showing livestock and he has exhibited the Dorsets for many years although pressures of work have meant he has had a couple of years off but fully intends to be back into it.