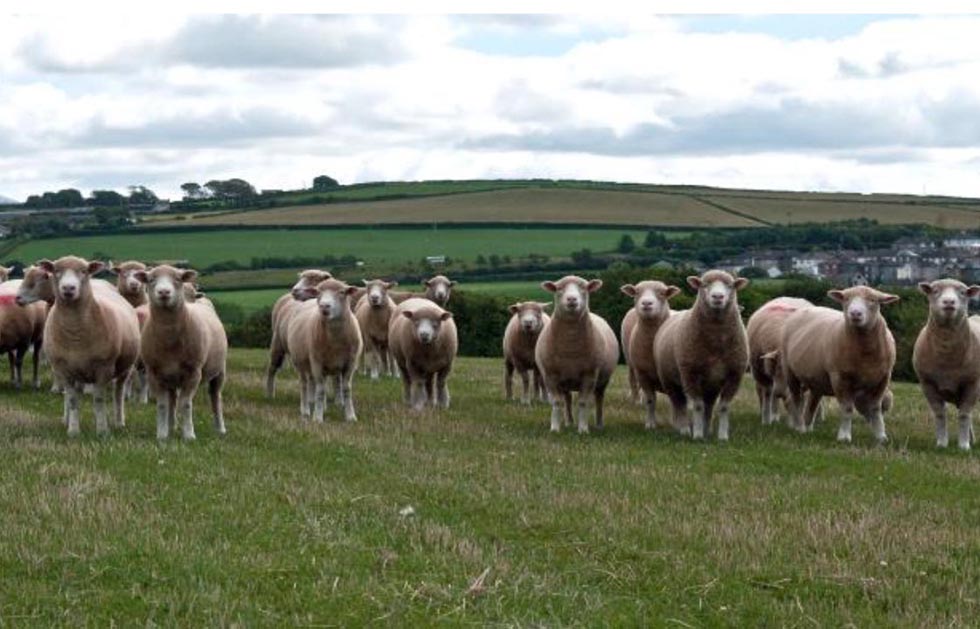 Flexible Poll Dorset ewes are allowing a Cumbrian farming couple to cut their flock numbers by half, yet still produce a similar number of lambs. Mark and Karen Hodgson farm two tenanted holdings in West Cumbria - the hill farm Wasdale Head Hall and Pickett How, Egremont, 18 miles away.

On the National Trust farm in Wasdale they run 1,200 Herdwick ewes which are bred pure on 1,100 h/a of mostly freehold fell running up to England’s highest peak, Scafell Pike.

At the 327 acre Pickett How, part of the Leconfield Estates, they run 120 Angus-Limousin suckler cows along with a flock of breeding ewes which, until recently, had been 600 three quarter Texel-Mules.

After initial success with the Poll Dorsets, the couple are now planning to replace all the commercial ewes with 300 of the pure bred ewes which will produce a similar number of lambs from three lambings over two years.

The Marren Dorset flock began after Mark, who had seen the performance of the sheep on a neighbouring farm when he was a youngster, said he would like half a dozen of the sheep for his birthday.

“We bought six in-lamb hoggs four years ago from local breeder Catherine Pritt at Gosforth. We were lambing them at the same time as our 600 commercial sheep and we left the Dorsets to lamb themselves which they did without problem or any supplementary feeding,” said Karen.

“We were so impressed that we went to the breed society sale in Exeter and bought 27 pure bred shearlings and set up a pedigree flock and within two years we had 96 Dorsets!

“This year the Dorsets lambed outside and we lost only three lambs from the 96 females which included hoggs, we only assisted 1 hoggit and a ewe with twins. We had built a new shed for the commercial sheep to lamb in and we were watching them 24 hours a day.

“With the Dorsets, we had no mismothering or any problems with prolapses or caesareans. Our commercial ewes were eating one and a half times more silage per kg of bodyweight than the suckler cows.

“We bit the bullet and decided we were going to sell the commercial flock and 300 of the ewes went at the beginning of June. We now we expect our feed inputs to be a quarter of what they were.” said Karen.

In early summer, the Hodgsons looked at sheep in 12 flocks in Northern Ireland which is only 40 miles away directly across the Irish Sea, thinking that the type of sheep bred there would be more suited to the climate in Cumbria, and they bought the best sheep they could afford - 100 females, giving them a total of 220 breeding ewes.

“We bought the best we could afford and now we have a solid foundation flock we can breed up increasing our numbers to around 300 hopefully by next September.

“Mark took a bit of convincing that we could produce as many lambs with a half as many sheep but now he’s a convert to the Dorset,” added Karen.

“The sheep get no supplementary feed and do not need much rich pasture as they get too fit. It makes it so much easier when you are not having to feed the sheep and they are also easier to check. They are just so low maintenance yet the ewes produce plenty of milk and are good mothers. 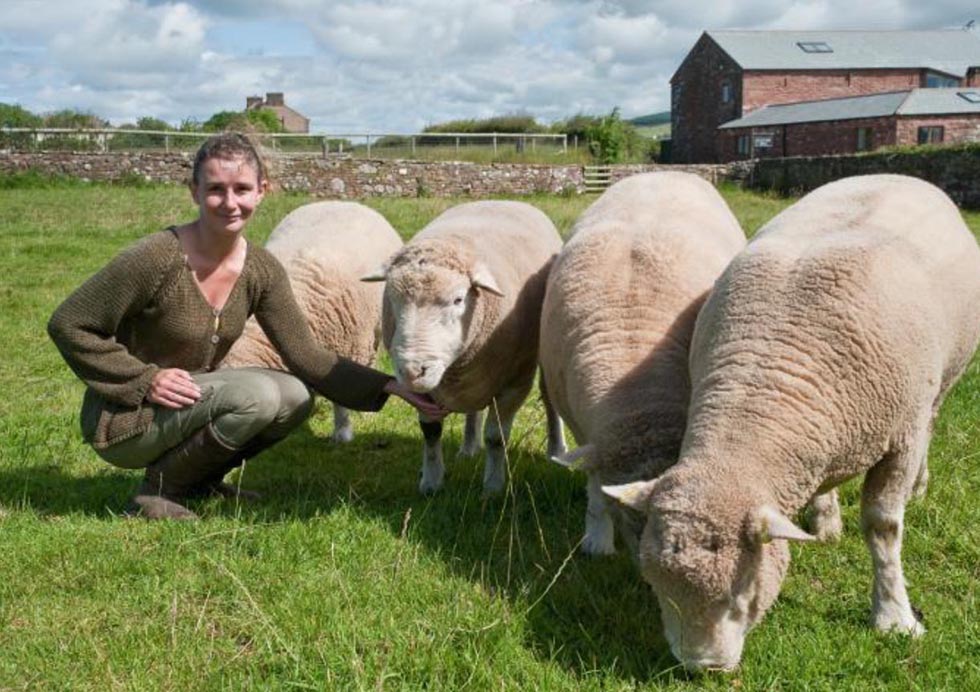 “They are very placid. Halter breaking a tup for showing takes just a couple of hours,” she said.

Traditionally, lambing started on March 6 and was finished by the end of April-early May. The plan is to bring the Dorset lambing forward to February and have subsequent lambings in July and November, with each ewe lambing roughly every 8 months.

Last winter the ewes were outside without any concentrate feed and the March lambing ewes scanned at 182 per cent with 176 per cent born.

The lambs are sold finished off their dams. Last November’s crop were sold from the beginning of March at weights of 34kg to 40kg, through H&H, Carlisle, and averaged £97.25 each. Other lamb crops have been sold off their mothers at only 10 - 12 weeks old.

There are still 150 commercial ewes, including some of the best Texel type lambs which are being retained as replacements, enabling the flock be closed.

“The Dorset rams work so hard. Last autumn we used Dorsets as chaser rams to the Texel, in the first three weeks of lambing only 150 sheep lambed, once the Dorset lambs started coming they just didn’t stop, 450 ewes lambed within the week.

The Dorset sired lambs do not have large heads and shoulders which make lambing easier. We are retaining some of the Dorset cross ewes.

The flock has six stock rams, which includes three home bred tups. These include two Irish-bred one from Richard Currie by Blackhill Jack and a ram lamb bought at the August 2010 Carlisle sale from Ben Lamb by Rossiz King Kong out of Trevilley lines. 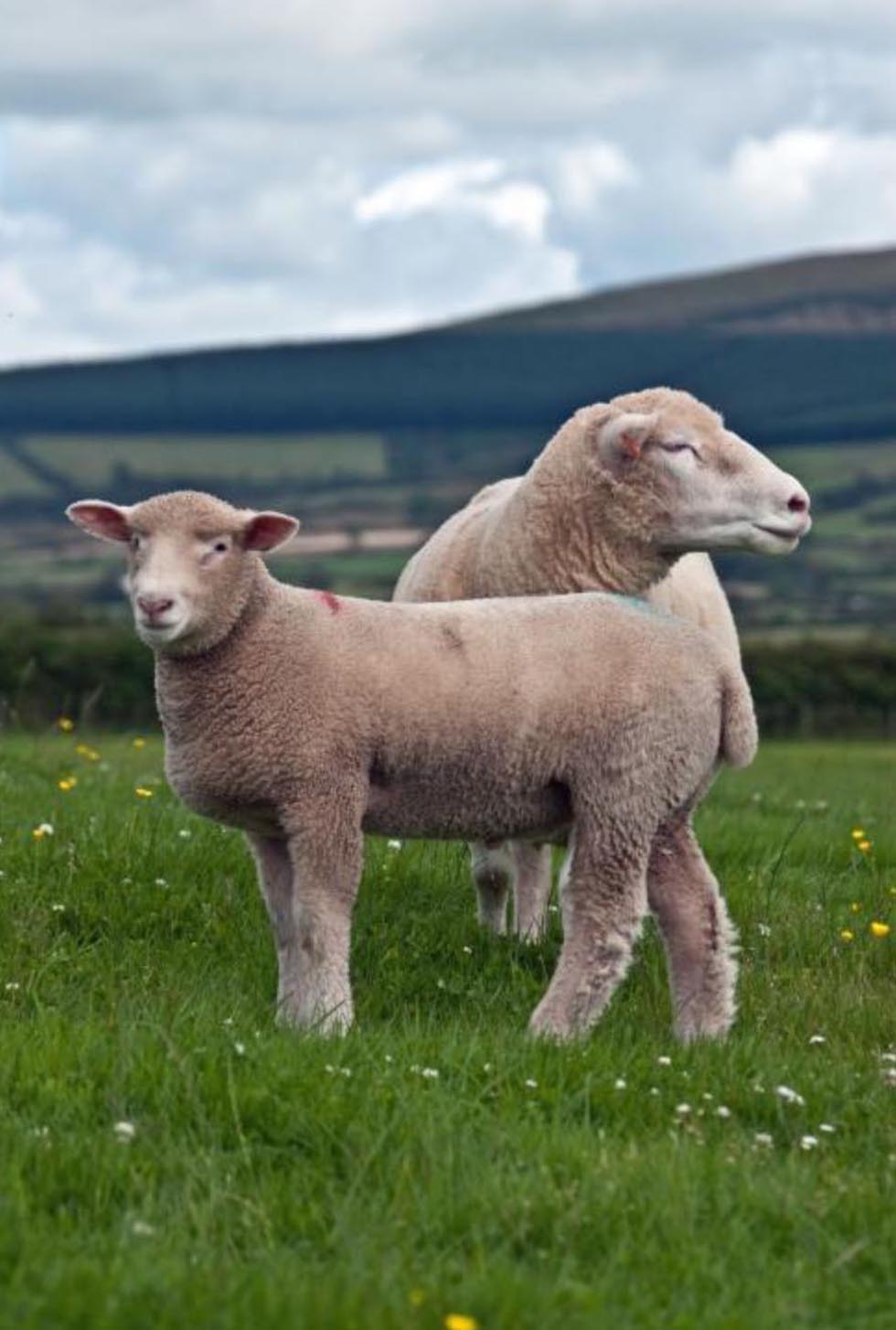 The Poll Dorset’s ability to lamb out of season has made the ewe popular as a recipient dam for embryo transfer work. But her natural lambs can be timed to take advantage of peaks in the market.

“We can plan to sell the lambs to fit the market which is a lot more satisfactory than the market dictating the price to us. People have asked us how we can manage to lamb so many times a year but they are trouble-free and running half as many ewes frees up grazing ground for the cattle.

“The breed is so versatile that you can fit them around other activities on the farm, such as our spring calving sucklers and the hill sheep which lamb from April until the end of May at Wasdale Hall,” said Karen.

The Dorset also produces valuable wool and with a combination of price increases from the Wool Board and the change of sheep, this year’s wool cheque has increased threefold.

Last year the Hodgsons, on the suggestion of their New Zealand contract shearer, clipped half the November and March-born lambs in May to see if it impacted on growth rates. The clipped lambs grew around 2 inches taller in body frame. This year all the gimmer lambs have been shorn.