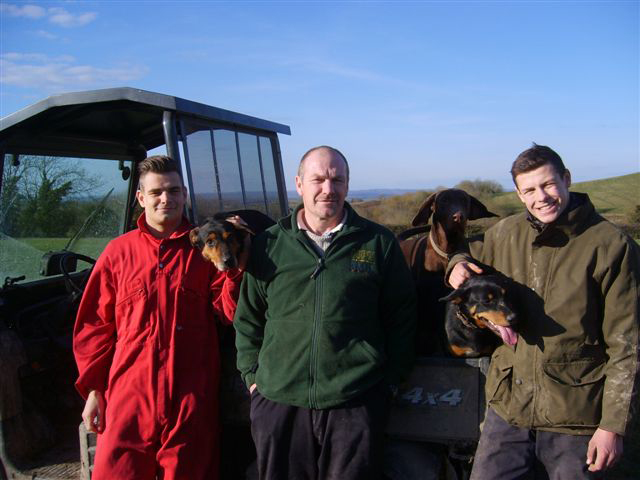 The Blackhill flock, owned by Jim Dufosee of Warminster, Wiltshire, has been recognised by EBLEX as the Most Improved Flock of Dorset sheep in England for 2014.

The award is presented by the EBLEX Better Returns Programme (BRP) to the recorded flock that shows the greatest genetic gain for commercial characteristics over a 12-month period. There is a separate award for each of 10 UK breeds.

Jim Dufosee grew up on the Longleat Estate where the family has a farming tenancy and took over a farm business tenancy agreement on nearby Ministry of Defence (MOD) land to provide additional grazing. Moving away from the family farm in 1989, Jim and wife Jacqui now live at Farnicombe Farm, on the edge of the MOD land. Their younger son Joe has been working with them on the farm for two years now, while elder son, Sam, finished his degree and now works in Bristol for a recruitment company.

They run pedigree flocks of 300 Polled Dorset ewes and 60 Dorset Horn ewes which are all recorded through Signet and are managed as one flock. In addition they have 150 North Devon Cows (Blackhill Ruby Reds) and purchase 50 stores each year to finish. 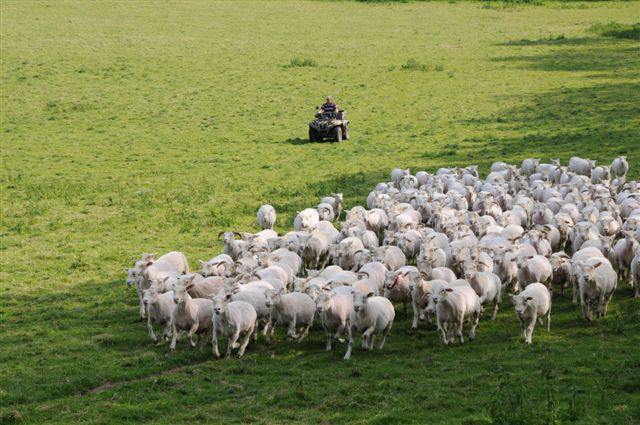 The whole farm is now organic and a proportion of the land is involved in the Higher Level Stewardship scheme. There is around 810 hectares (ha) of permanent pasture available to them on the Salisbury Plain, this is Site of Special Scientific Interest (SSSI) status rough grazing and classed as an MOD “Danger Area”, so grazing rules apply.

They combine around 120ha with half as high clover/Italian ryegrass rotational leys; these suit their system as they are ready for grazing and cutting earlier. They grow around 40ha of roots and have 10ha of arable silage.

Building up the Dorset flocks
When Jim was establishing his pedigree flocks he had numerous grazing agreements with local dairy farms, so his Dorset ewes lambing in September suited the arrangement. In the summer months, when grazing was more restricted, he stocked ewes more tightly. The Dorsets’ natural docility made them welcome guests to the dairy farms, as they didn’t attempt to escape even when forced to graze at higher stocking densities!

Autumn lambing fitted their whole farm system well, making the best use of available grazing and tying in with the demands of the spring calving herd and spring drilling.

Production cycle
The flocks lamb in two groups, the first consisting of 150-200 ewes lambing in September. The ewes lamb indoors and are turned out 48 hours later, grazing behind the cattle until the end of November when they are moved onto root crops. Their lambs are weaned mid-December and remain on roots, while the ewes are turned onto rough grazing to dry off.

The second group of up to 150 ewes are lambing mid-October. They lamb indoors and stay in for a week, after which they are turned out to grass for the first month and then moved onto roots where they remain for the rest of winter. They are weaned at the end of February, when ewes are moved to rough grazing and lambs are left on roots to finish.

Blackhill flock replacements are selected soon after weaning in the new year from the first batch of September-born lambs. Ewe lambs destined for the May Fair, which is the main Dorset sale, are also identified at this time. 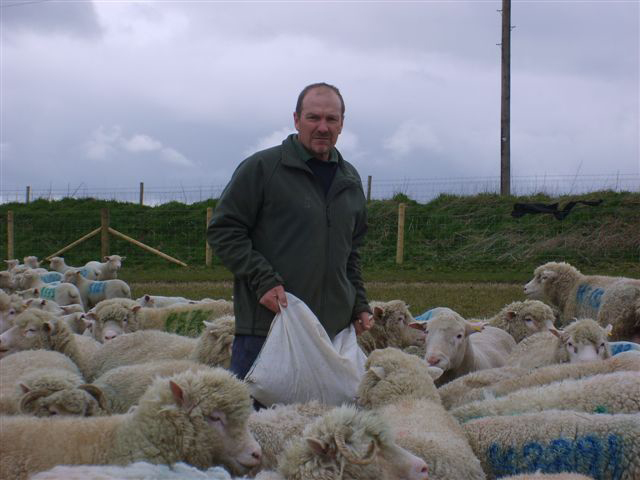 In March all ewes are moved onto Italian ryegrass/clover-rich leys. Weather permitting, they are shorn early April and put into their single-sire mating groups from 16 April (up to 40 ewes per ram). The Dufosees use a lot of homebred ram lambs, with bought-in rams used to provide new bloodlines. They are keen to find rams with superior breeding potential for the Blackhill flock. Their understanding of Estimated Breeding Values (EBVs) and overall breeding index helps to hone in on particular traits and narrow down the selection of prospective sires.

The flock is split into families and each year they will be served by two rams, at least one of which will be a high-performing ram within the top 10 per cent of the breed. Any unproven sires will be given a chance, but progeny from such rams will only be retained once he is proven through his own performance figures.

Selecting animals for breeding:
Ewe lambs with above-average breeding merit are sorted into a group and then reselected based on breed type, feet and mouths. “We are passionate about the Dorset characteristics and keen to ensure standards are kept to drive the breed forward,” Jim said.

“Around 90 per cent of our Blackhill ewe lambs will be kept as flock replacements or sold for breeding.”

For the males they do the reverse, choosing between 30 and 40 ram lambs which tick all the boxes for appearance and type and then reselect them based on their EBVs and breeding index.

The Dufosees finish all their own stock and were one of the original suppliers to secure a contract with a well-known supermarket providing out-of-season lamb. Split lambing takes the pressure off available housing and land, as well as ensuring a prolonged supply of lamb for this contract. All lambs are finished within a target specification, grading as E or U and with an average 19 kilogram carcase.

The flock is wormed on the feedback from faecal egg counts. They dung-sample groups on a regular basis to monitor worm burden. In order to comply with their organic status, veterinary input is necessary to confirm treatment. In addition, they are keen to promote opportunities to export from their Blackhill Dorset flock, and dung sampling provides an opportunity for regular vet visits, building an important relationship for export certification.

The latest consignment of recorded rams was exported earlier this year to Charlotte and Alex Moriarty, Pays de la Loire, in France. 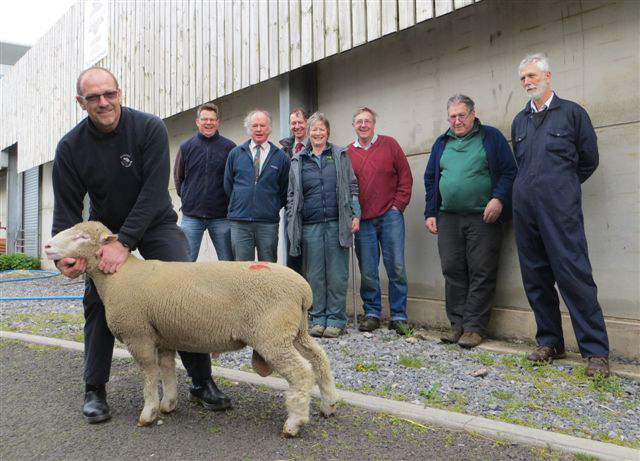 Centurion Ram of the year

Performance Recording
Jim’s Blackhill flock have been an active part of the Centurion Sire Reference Scheme for over 15 years, making use of elite sires within the group.

The flock has been recorded since the service began in the late 1990s and throughout this time they have been weighing and back-fat scanning to monitor flock progress.

Through performance recording they have managed to improve carcase weight and quality, especially since the inclusion of back-fat scanning, which has given them the ability to record actual muscle depth and leanness.

“Originally I wanted the figures to prove the Dorset performed,” Jim explained.

“Now I find the figures act as a tool to help me mould the flock in the direction I want it to grow.

“Ultrasound scanning has helped us to focus in on leaner traits; over the years we have seen carcase weights improve and fat levels reduce, making the Dorset more competitive as a terminal sire. We are satisfied that we are achieving good weights and leaner animals, the challenge now is to maintain this, while continuing to move the flock forward.

“The Dorset traits are important and must not be lost through selecting stock on index alone, they give me an informed approach but they do not run the flock!”

Figures assist sales
The Blackhill flock used to go to all the shows and have won numerous awards. More recently they focus on the breed sales with shows attached such as the May Fair and the breed sales at Worcester, Llandovery and Carlisle. Their son, Joe, has been at home farming for the last two years and is responsible for the sales, with two thirds being sold directly from the farm. Sales are built on a good reputation and established links with clients, a good proportion of which show an interest in EBVs, making selections based on traits that suit their systems.

Joe’s enthusiasm is contagious, he is very livestock-orientated and is keen to push the flock on again. His desire is to increase the flock to 500 ewes and their focus now is to improve the lambing percentage of the September lambing group (currently 160 per cent) to reflect that of the later group, which is closer to 180 per cent. His motivation gives a new sense of regeneration to the farm and getting the award now on the back of his enthusiasm is very inspiring to them all.

Commenting on the win, Signet Breeding Services Manager Sam Boon said: “Rates of genetic improvement in Signet-recorded flocks are at an all-time high. The difference between the best high-EBV breeding stock and average animals is increasing year on year.

“This means commercial producers have more to gain when investing in rams with superior genetics. Pedigree breeders can capitalise on these differences too and this is exactly what Jim has done. The improvement in the genetic merit of their flock is clear and they are to be congratulated on their achievement.”

The Sheep Better Returns Programme (BRP) is funded by EBLEX and aims to help English sheep producers get better returns from their enterprises by improving their skills in five key areas:

EBLEX is the organisation for beef and lamb levy payers in England, and is a division of the Agriculture and Horticulture Development Board (AHDB). Find out more at www.eblex.org.uk.

For more information please contact Jo Biggs, in the EBLEX press office, on 024 7647 8836 or via This email address is being protected from spambots. You need JavaScript enabled to view it..