This Premier Show & Sale attracted an entry of 222 great quality sheep, and the popularity of the Breed was reflected in the interest shown by the large number of buyers present and eager to do business. These also included breeders from Scotland, England and Wales, given this event’s GB Export Sale status.

The earlier part of the day was given over to the judging of the different Classes and this was ably accomplished by Judge Mr Joe Dufosee of the famed Blackhill Flock, Wiltshire. Each Class entry was keenly contested with top quality animals being brought forward for judging. 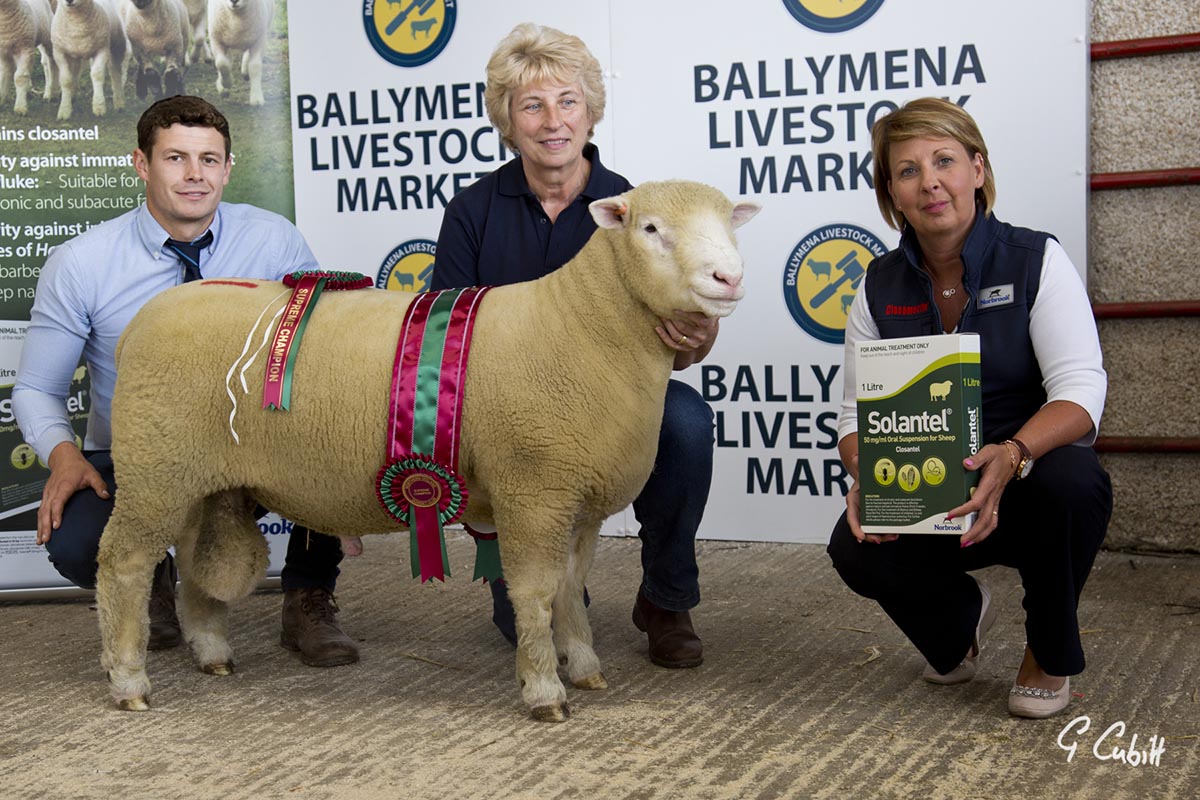 Following careful consideration Mr Dufosee found his Supreme Champion in a superbly bred ram lamb from the Kildowney flock of Graham Cubitt. This tremendously formed young ram was sired by Richhill Wyatt off a Downkillybegs Huggy dam and he later went on to sell for 550guineas, being purchased by Mr Sam Driver, Derbyshire who runs over 500 breeding Dorset ewes in his Sandy Lane Flock totalling 4400 sheep. In making his choice, the judge Mr Dufosee commented that this big solid ram lamb possessed all the qualities of the Breed and was outstandingly correct in every way. 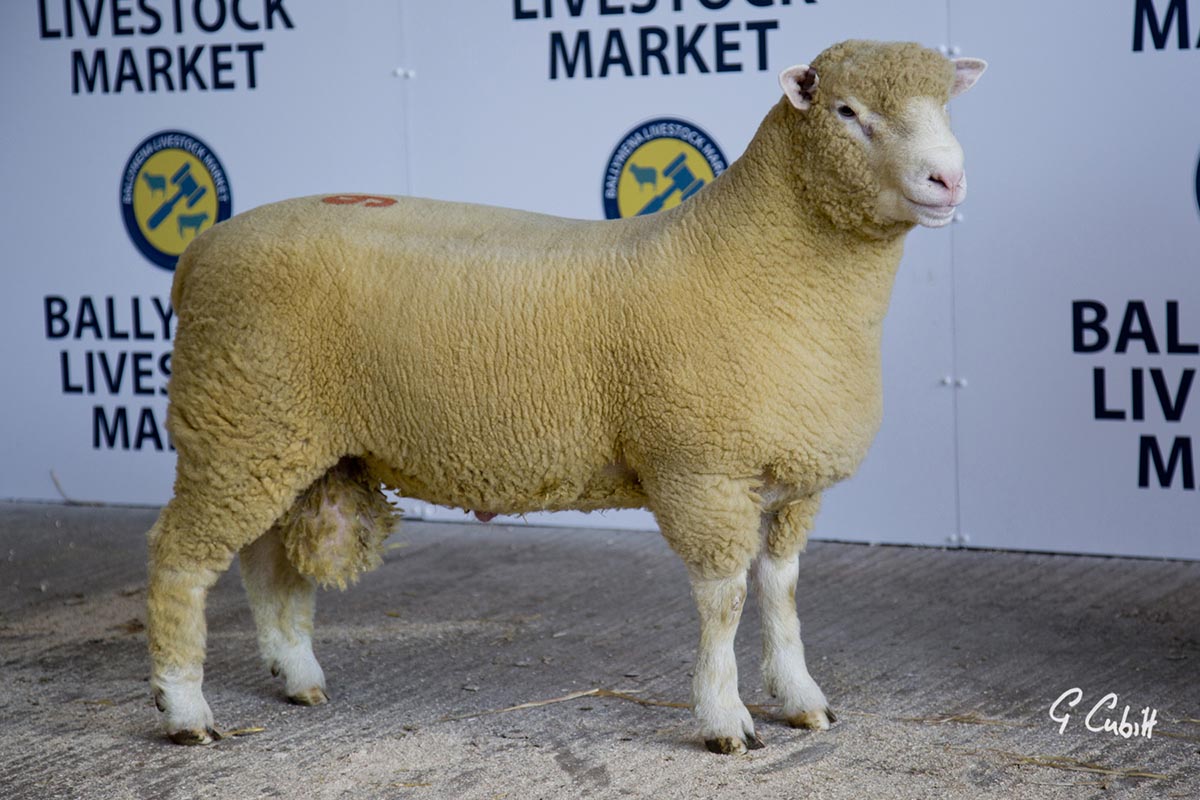 The top price of the sale was achieved by two breeders from two different Classes. First up was an eye catching young ram lamb from the Downkillybegs Flock of W & K Carson, sired by Downkillybegs TAZ, and following a flurry of bids sold for 800gns to A & G Sloane, Dromore Co Tyrone. This was matched by an outstanding ewe lamb from the famed Olivertree Flock of J & R Hill. This Richhill UBank bred lamb went on to gain the top female price of 800gns to Graham Meadon, Wales. 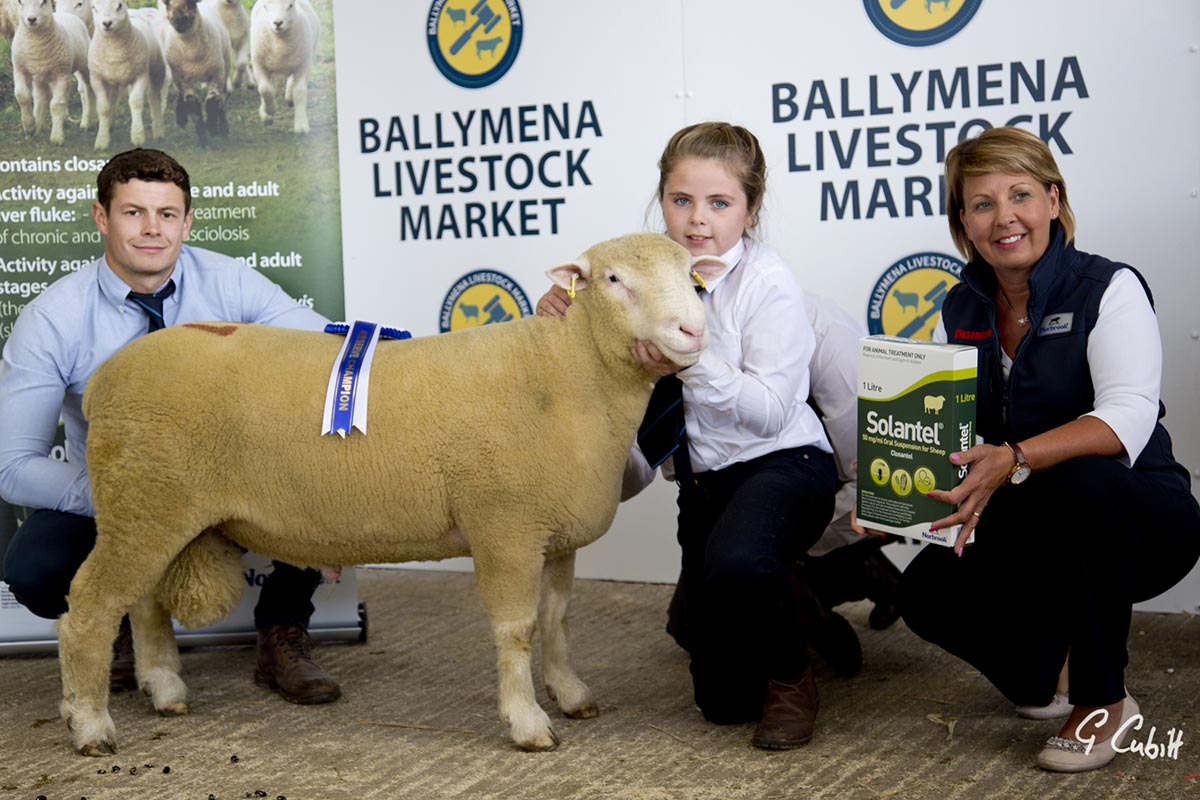 The Reserve Champion was 1st prize Novice Class winner, a ram lamb from the Bannside Flock of Rachel Moore, a fine example of the Breed sired by Granagh Nightrider. This ram lamb sold for 650 gns, being purchased by the judge, Mr Joe Dufosee of the Blackhill Flock, Wiltshire.

Opposite Sex to the champion was a shearling ewe of Ballytober Flock owned by K & B Sloan and was sold for 210gns.

he Champion Horn Dorset was a ewe lamb shown by Cameron Carson of the Mainevalley Flock and sold for 350gns to Mr Joe Dufosee, Wiltshire. 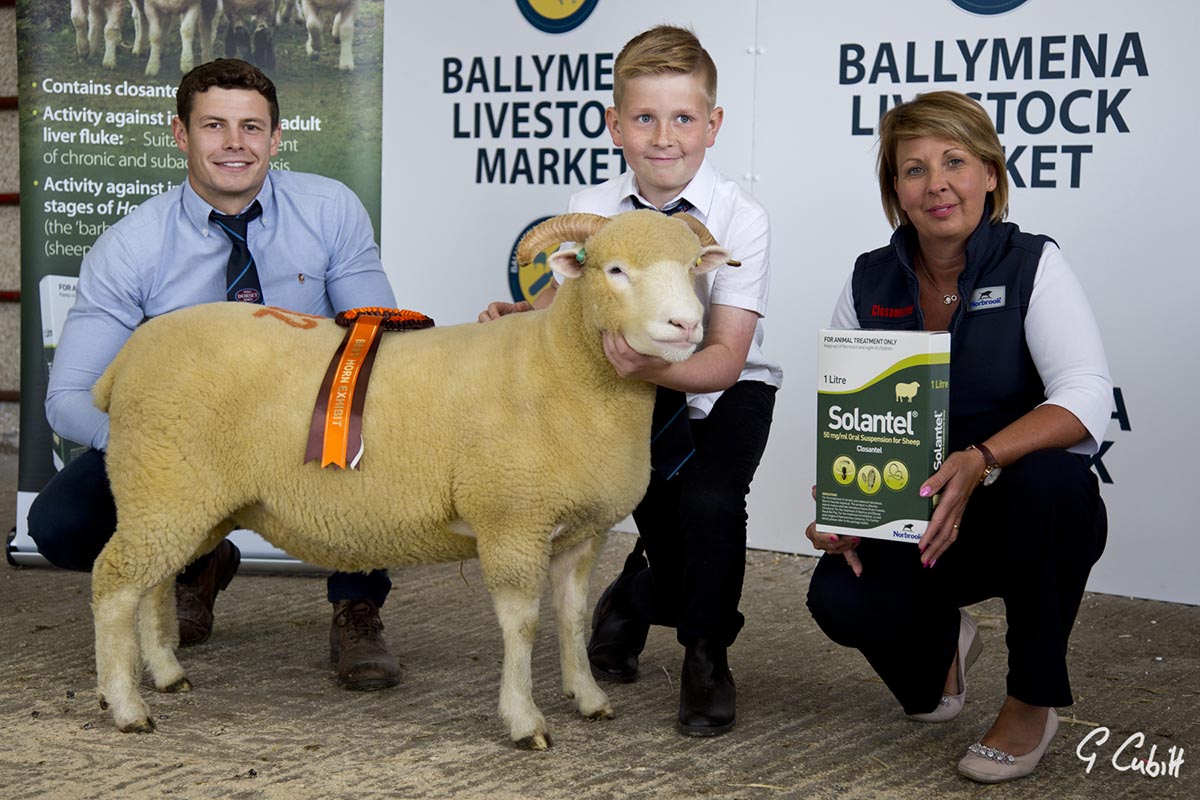 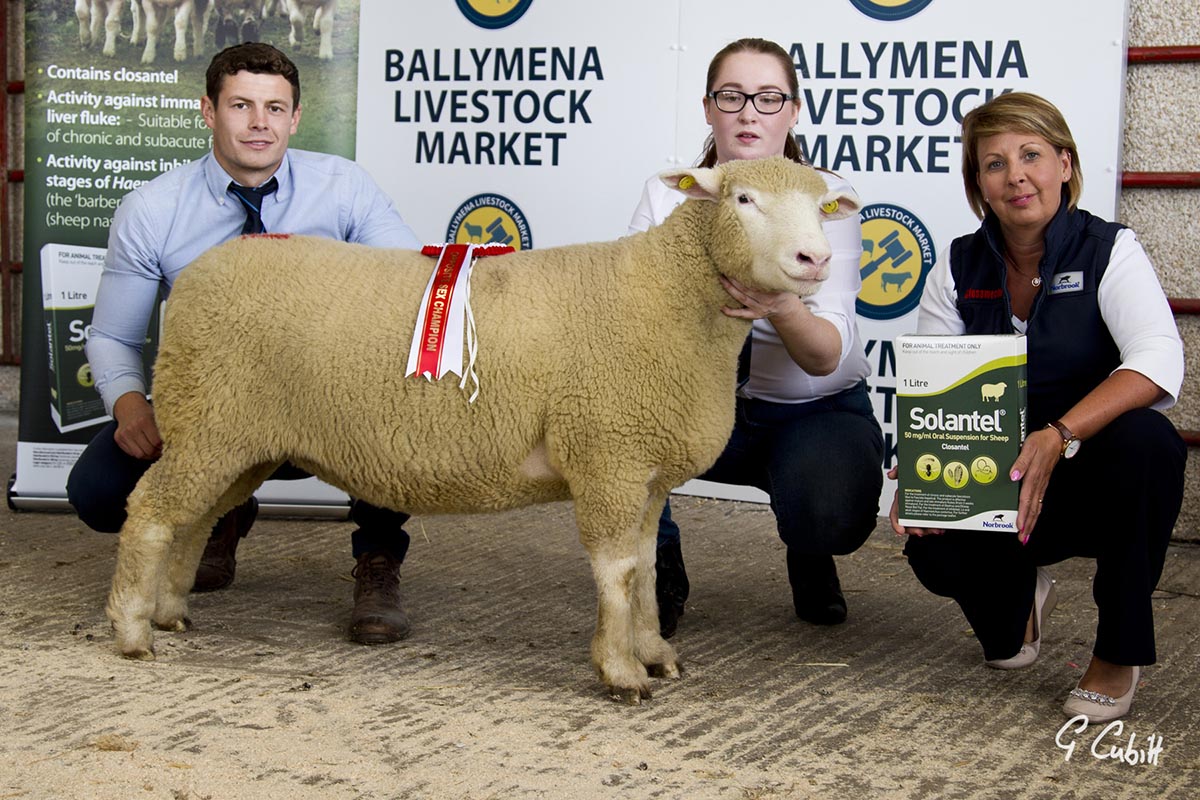 Joe Dufosee, judge, left, Georgia Sloan and Jacqueline Hamilton, sponsor, with the Best Opposite Sex to the Champion

There was a keen interest in strong ewe lambs with the first placed pair from the pen of G & G Henderson of the Sandleford Flock selling for 260gns and 280gns respectively, with others from this flock achieving 380gns and 340gns.

The Club would wish to record its’ appreciation to Mr Joe Dufosee for his judging of the event and to Norbrook for sponsoring the Annual Premier Show & Sale Prizes, and many thanks to Jacqueline Hamilton for representing the sponsors on the day.

The NI Dorset Club would wish to commend the Breed for its qualities, both in the pedigree sector and its ease of lambing, fast growth rates and finishing in the commercial sector. The next sale organised by NI Dorset Club members will be held in Hilltown with the Show at 12 noon and Sale commencing at 1.30 pm. This is an EU Export Sale and will offer new and established Breeders the opportunity to purchase top quality stock.