Wednesday 21st July saw the 3rd annual Scottish Dorset Breeders’ club sale, held not on the surface of the sun as the temperature suggested but at United Auctions, Stirling.

The sale attracted vendors from both Northern Ireland and England as well as Scotland, with entries of 70 females and 24 males. 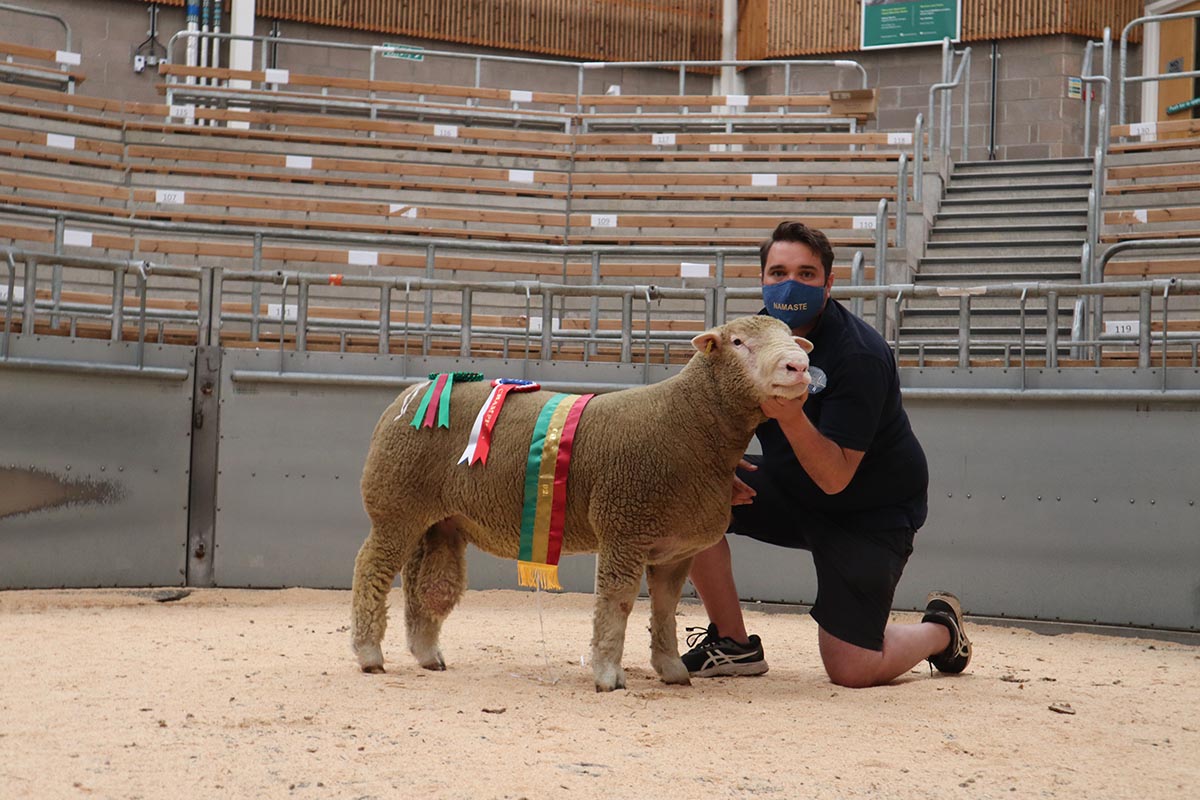 Due to the recent relaxation of covid restrictions it enabled a pre-sale show of sorts, with all entries in the class being released in the sales ring and caught up by Joe Baker of the Lanamuir flock, Windshiel farm, Duns, who had kindly agreed to judge the fantastic sheep which were brought forward.

Lot 65 from Denis and Declan Rankine, Lochore, Dun Eideann Denzil was an outstanding example of the breed taking not only first prize in the ram lamb class but also champion male and overall show champion. Sired by Islaharnan Bruno, out of one of the flocks best ewes Bennachie Zora was reared as a triplet. This immaculately presented lot stood out amongst the crowd and sold for 550gs to Mr Cassie, Portstown, Inverurie. 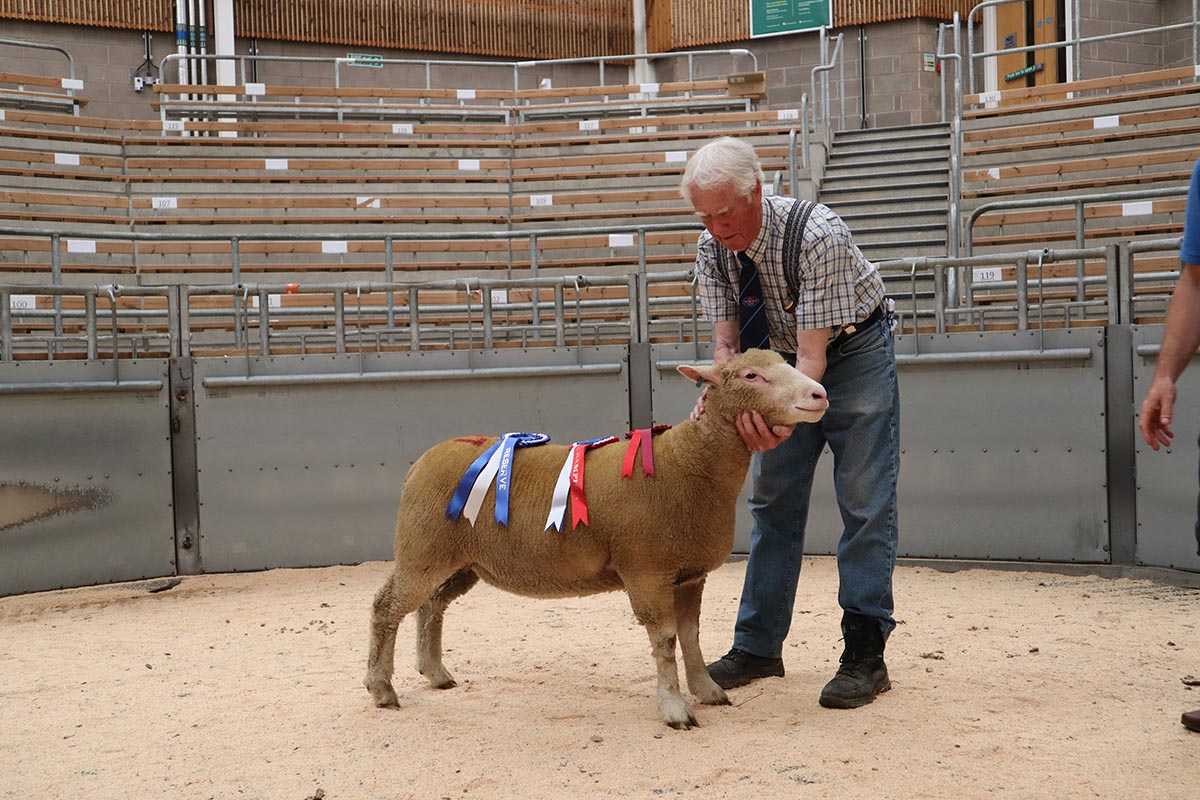 Joe’s pick of the quality females on offer was lot 27, an impressive ewe lamb from Alec Steff, Waggoners flock, Burnley, who took the female championship and reserve overall champion. D1263, a Richhill Bravo daughter out of a homebred ewe by Richhill Zinfandel was an eye catcher and certainly caught the eye of Dale & Morag Robertson, Cheeklaw Brae, Duns who paid 400gns to secure themselves this fantastic female. 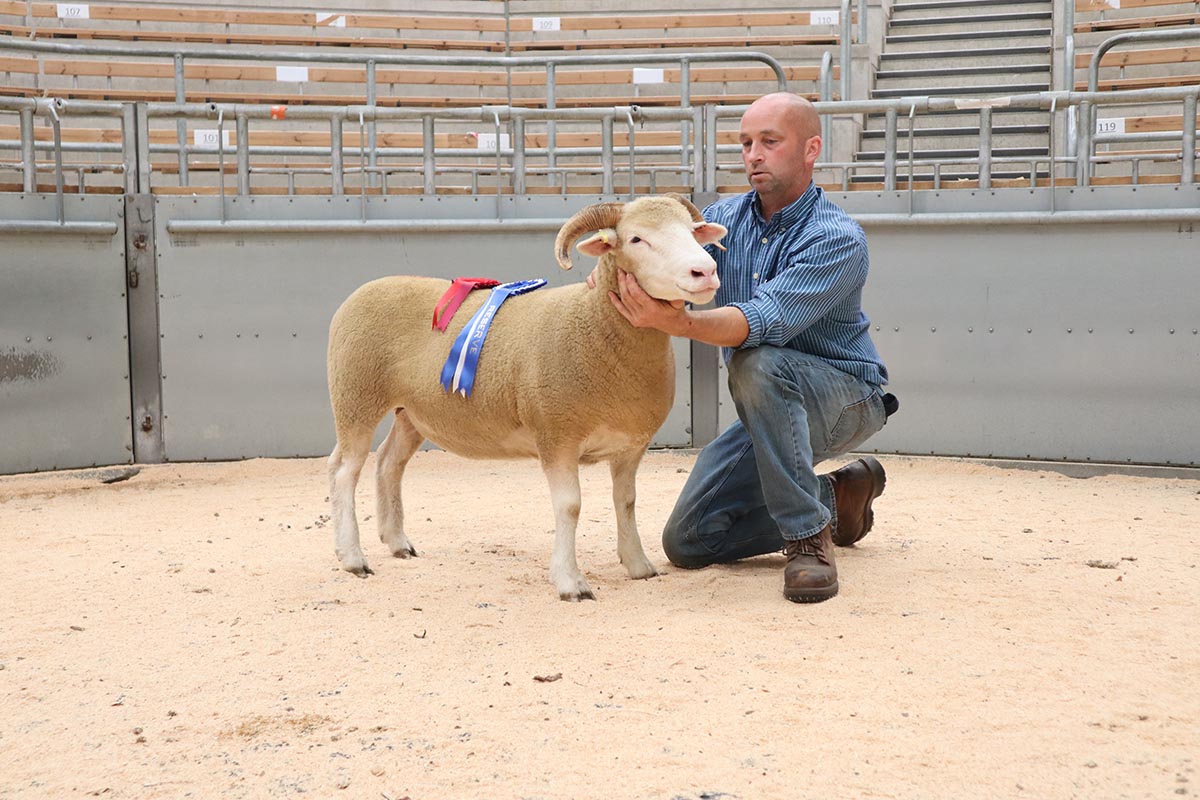 Despite there being a lack of space in the rosette cabinet after his tremendous success at the Great Yorkshire Show earlier in the month, Richard Fitton of the Dynamite flock, Bolton, had to find room for not only a first prize gimmer rosette but also reserve champion female and best horned exhibit. Lot 9, Dynamite C2226 a very classy example of a horned dorset with impressive pedigree was snapped up by Chloe Stewart of the Cala Flock, who had made the long journey down from Caithness for the sale.

Winner of the shearling class and reserve male champion was lot 50, Rumbling Bridge Crackerjack from Fiona Harley, Craiglaw, Kinross-shire. Sired by Huish Z11527 and out of a homebred ewe hogg, this was the first male offspring of the sire to be offered for sale in Scotland. Despite being a young shearling born in February 2020, he did not disappoint when it came to power and strength and was purchased by R & J Mitchell, Huntly for 450gns. Top price female of the day came from the exceptional consignment brought over the water by Tommy Wright, Ballytaggart, Northern Ireland. Lot 31, Ballytaggart D2490, a ewe lamb by Wilsey A438 sold for 750gns to S J Wright, Axminster.

It was youngest vendor Jack Royan of the Reivers flock, Duns, who showed everyone how it should be done by selling top price male of the day with Sandy Lane Dan Dare for 600gns to Danny Creer, Balaglonney, Isle of Man. Bought as a lamb at foot with his twin brother in October, this mighty horned ram lamb had clearly thrived on the Berwickshire green stuff. Topping the pen trade with their first prize pen was I & G Farmer, Cowden Flock, Lochgelly. This even pen of 3 was sold at 300gns per head to W S Currie, Quarter, Hamilton.

Despite the scorching weather, trade was slightly cool in places, however with clearance rate of 72% it was again clear that demand for the breed in Scotland is high with sheep going the length and breadth of the country as well as to the South of England.

The sale would not have been possible without the hard work of United Auctions, Stirling who hosted the sale and show. Many Thanks to the whole UA team involved with a special mention going to Margaret Owens-Smith for her work with the entries and catalogue and of course to auctioneer Raymond Kennedy, who again did an excellent job.

Thanks must also be paid to the vendors, purchasers, sale attendees and the Scottish Dorset Breeder’ Club committee who all dedicated their time in ensuring that the 2021 sale was a success yet again.