A tremendous entry of sheep went under the hammer at the annual Dorset Horn and Poll Dorset May Fair in Exeter on 5 May, following a close day of showing after a year off. "The quality of the sheep here was fantastic, there hasn't been a single pen that looked out of place," said judge Joe Dufosee.

Winning the overall breed championship was Jeremy Durrant's Poll ram Hydes Duranimo D1209 on his owner's first visit to the Fair. By Blackhill Bart B4778 and out of Sherborne B5454, this ram impressed with his overall presence. "As soon as he walked into the ring he took my eye - he was up on his toes and had a good head - he's a big strong powerful ram," said Mr Dufosee, who keeps 560 Dorset ewes near Warminster in Wiltshire. 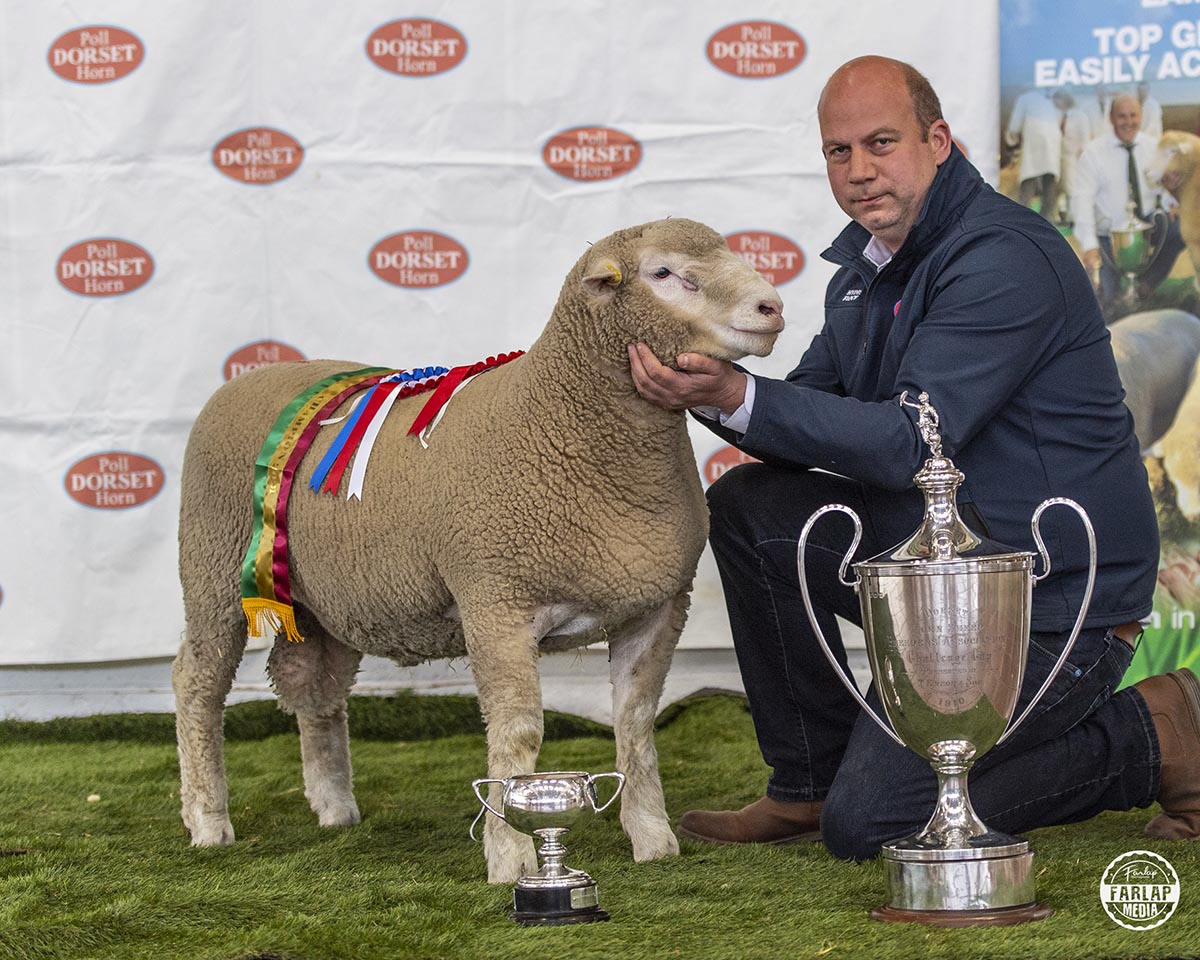 Duranimo has terminal and maternal indices of 230 and 199, respectively, and went on to sell for 3,400 guineas. "Blackhill Bart has been our best breeding ram," said Mr Durrant, who runs 500 Dorset ewes on his 3,500-acre arable farm at The Hydes, Dunmow, Essex. "I had Dorsets when I was a boy and I wanted something to fit in with the arable rotation - they lamb in the autumn when I'm less busy and make use of our cover crops." Duranimo's half-brother Hydes Defiant D1230 sold for 1,600 guineas.

He was sired by Sherborne Benchmark B5736, which was the highest indexed lamb on the farm in autumn 2018. "We bought Benchmark 18 months ago as star of the Sherborne flock’s production sale for 3,400 guineas," explained David Rossiter. "And the performance figures match - his sons are at the top end of the recording scheme."

Dynamite has maternal and terminal indices of 221 and 269, respectively, and is out of Huish U6184. "He's a real breeder's sheep - he comes from a line that's stamped great muscle and correct character within the flock," added son Richard Rossiter. "We thought he'd do well but we weren't expecting this success." Huish Dynamite went home with Mr Durrant, who paid 4,000 guineas for him.

The Rossiter family also scooped second spot in the Poll ram lamb class with Dynamite’s half-brother Huish Denzil, which went on to top the mart at 5,200 guineas, selling to Derbyshire breeder Sam Driver. 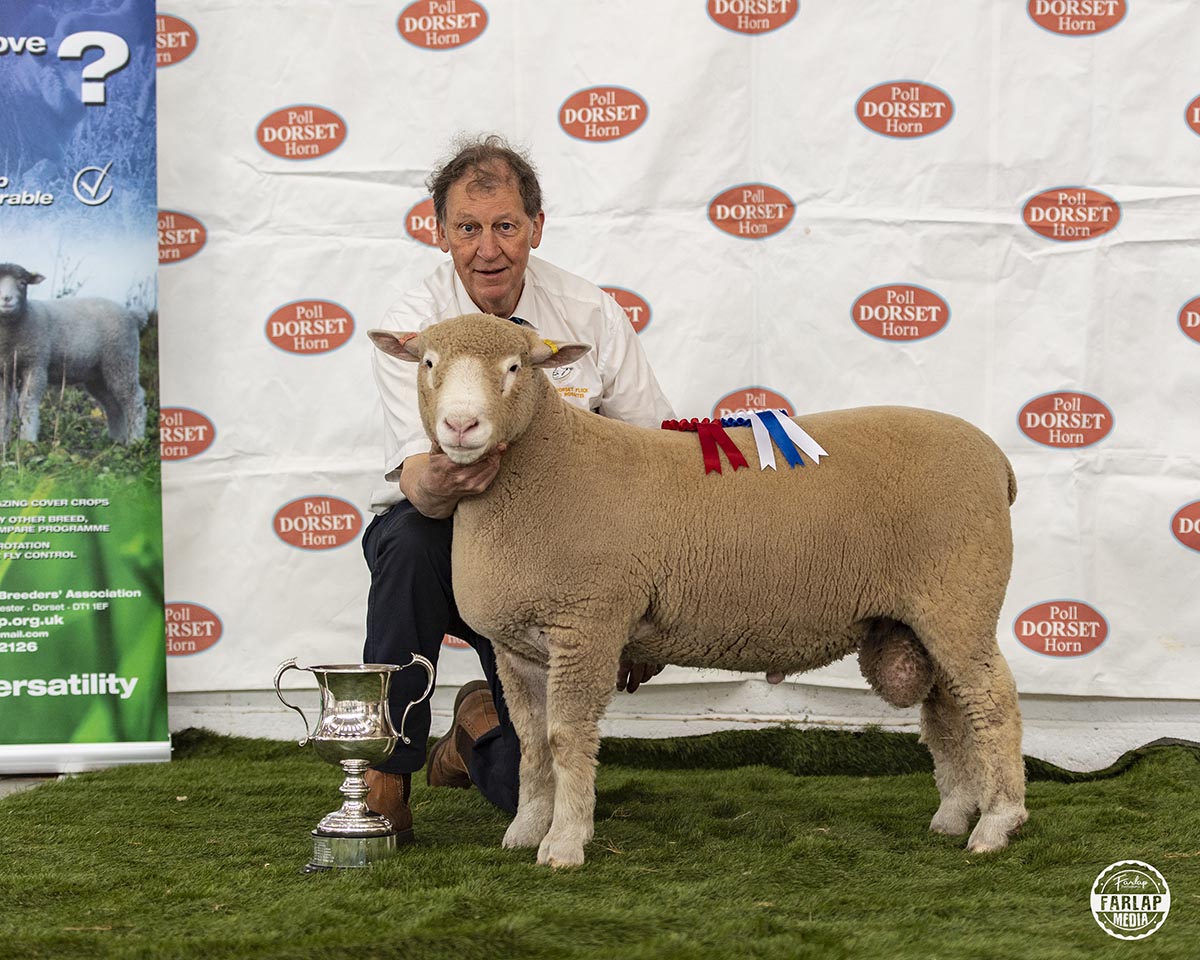 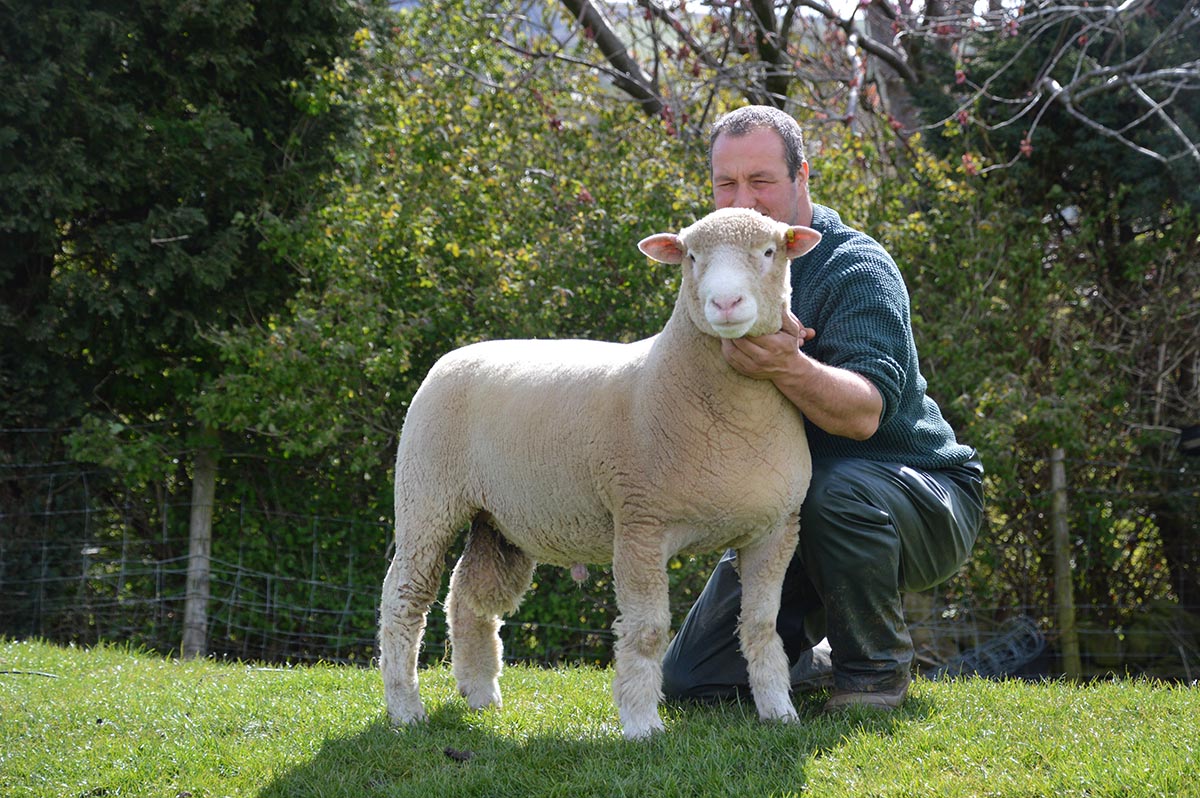 Mr Driver had his own success in the horned section, with Sandy Lane Calypso C6350 commanding top spot due to his tremendous horn setting and carriage. Born in January 2020, his sire Sandy Lane Avici A5053 was breed champion at the Great Yorkshire Show in 2018, and he's out of the farm's Sandy Lane Z4461. He sold for 1,600 guineas. 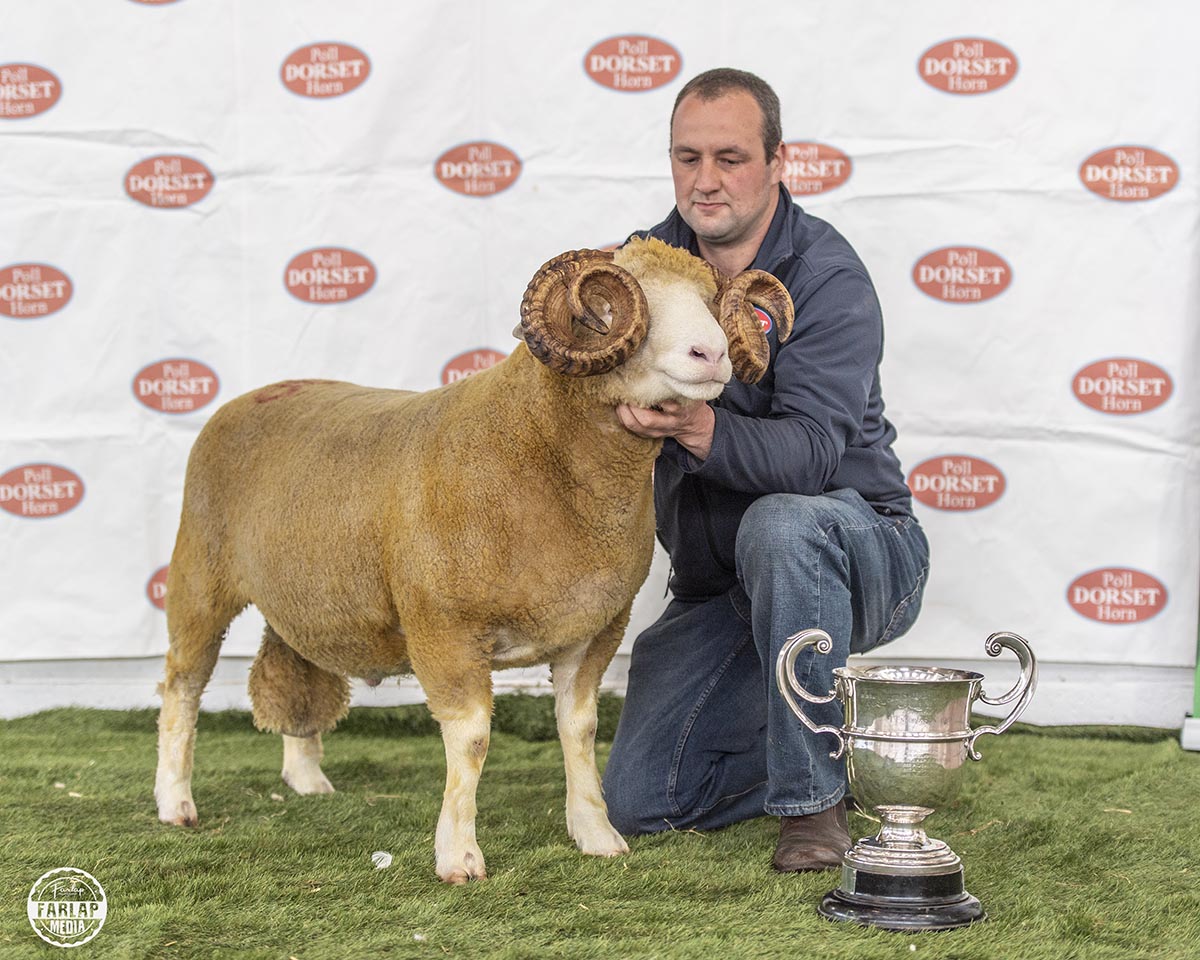 "This was my best year for shearlings - they've been a stand-out bunch, but he's a really good all-round sheep," said Mr Driver. "Both his grandfather and father breed good females and we've got 70 offspring from his father now." Mr Driver keeps 200 Dorset Horn and 300 Poll Dorset ewes at Sandy Lane Farm, Glossop, Derbyshire, alongside 3,000 commercial ewes. "We've not been without Dorset Horns since 1957 - we keep the first hill x Dorset ewes for out-of-season lambing and lambs which we can fatten straight from grass."

Setting the female ring alight was female champion Sherborne Daisy D6834 from R & R Hole's Hill Street Farm, Sherborne, Dorset. This eight-month-old Poll by Huish Action A14324, out of Sherborne A5075, commanded rapid bidding and sold for the top female price of 1,200 guineas. 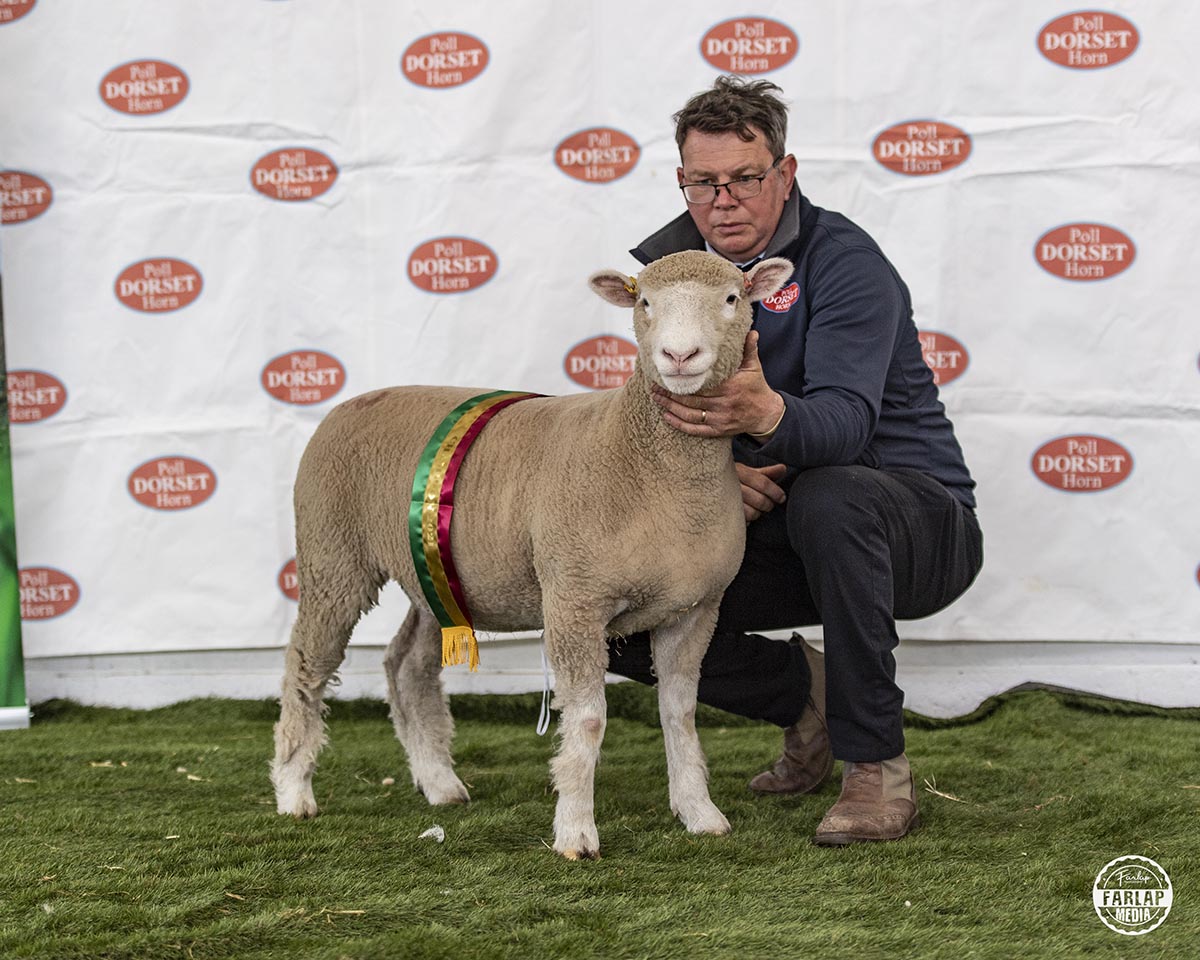 "She's physically a big lamb and she's going to grow into a big ewe," said Rob Hole, who farms 400 pedigree Poll Dorset ewes at home. "I bought her father here from David Rossiter four years ago for 2,400 guineas, and we've had a lot of great offspring from him." Daisy has a maternal index of 201 and a terminal sire index of 218, but Mr Hole didn't expect to scoop the top spot with her. "It took ages to stop shaking," he said.

“But it's nice to get the recognition and it's fantastic to get out and about again after this past 12 months."

The reserve female spot went to Christina Johnson's Poll Bamburgh D706. Born in September 2020, she was sired by Poorton B790 and out of Bamburgh A470, and has maternal and terminal sire indices of 273 and 310, respectively. The first animal into the sale ring, she sold for 320 guineas. 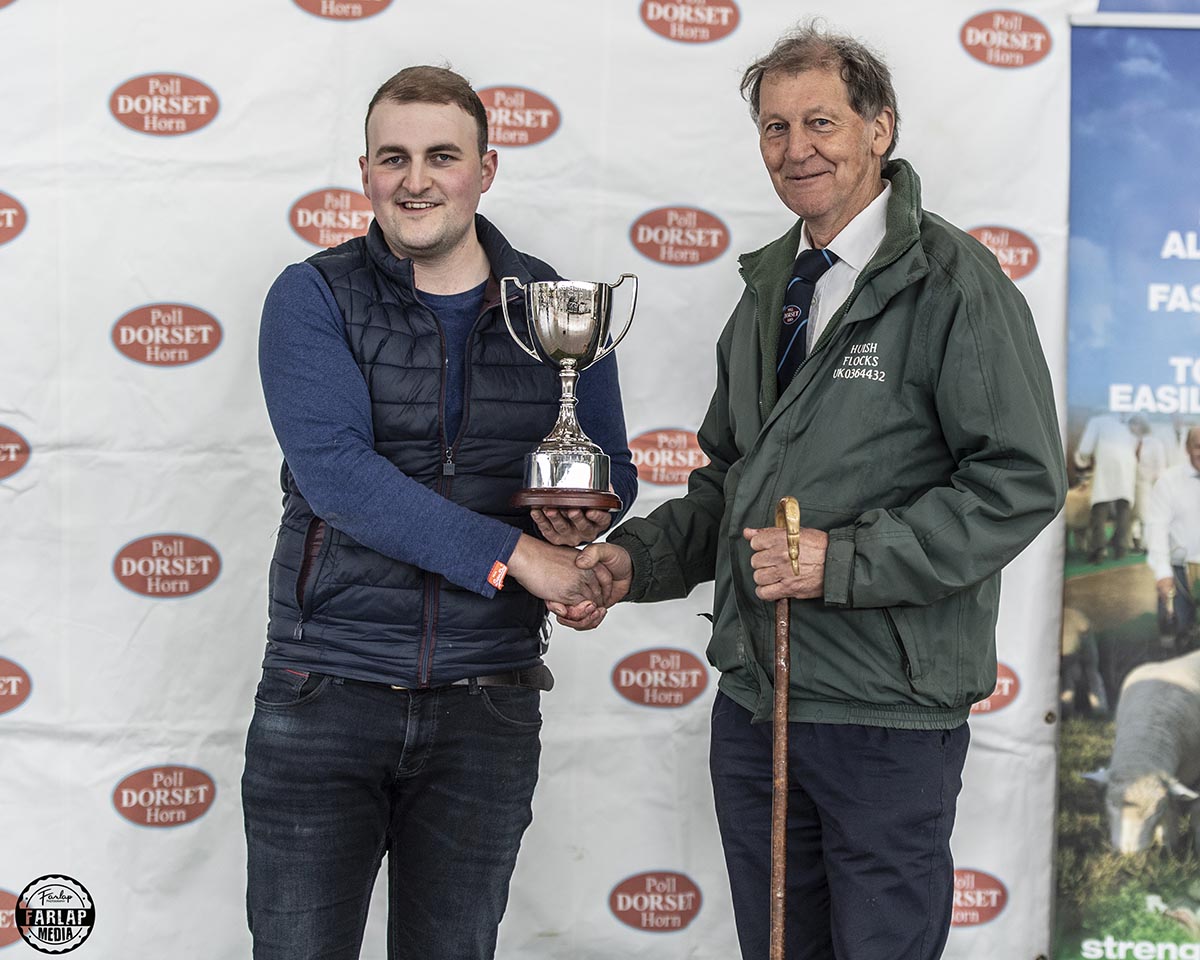