A huge entry of more than 2,100 Dorset sheep were presented at the prestigious Dorset Horn and Poll Dorset May Fair in Exeter on Wednesday (9 May), selling to a top price of 2,000gns.

The entry, which was well up on last year, saw 1,887 pedigree and commercial go under the hammer with Kivells auctioneers, following the first day of showing on Tuesday.

The Exeter-based event, which is the first major sheep breeding sale in the farming calendar, attracted entrants from all across England, Northern Ireland, Scotland and Wales, with some top quality stock. “This is the premier Dorset sale – you truly test yourself against the best Dorset sheep in the country at the May Fair,” explained James Royan, chairman of the Dorset Horn and Poll Dorset Society. 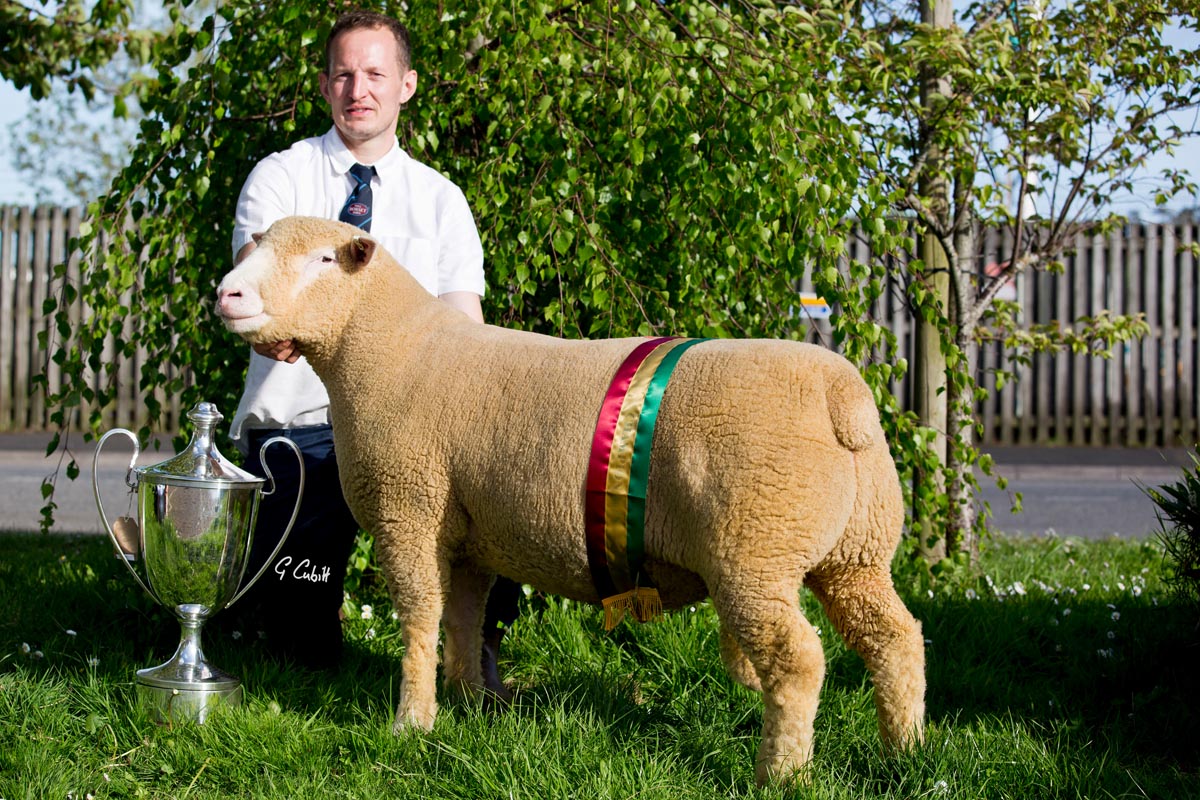 More than 180 of the UK’s finest Dorset sheep competed for top honours at the show, with David Lewis from Narberth, Pembrokeshire, scooping the supreme championship with his poll yearling ram Pembroke Zupreme Z172. Sired by Ballytaggart Upstart U873 and out of Pembroke S139, this ram really caught judge Andrew Kingdon’s eye.

“He’s just an outstanding sheep,” he explained. “I’m looking for good flesh, and an animal that’s correct on its feet – he just had the edge.” 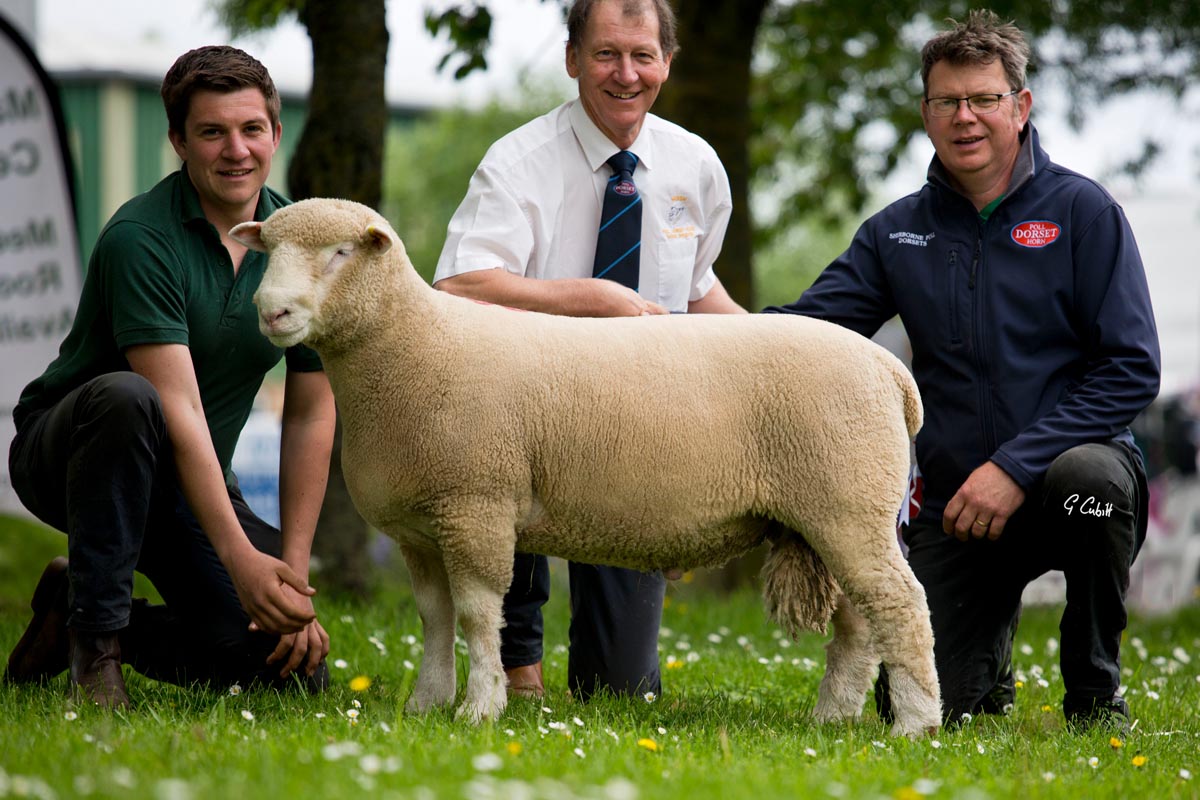 Mr Lewis, who keeps 300 pedigree Poll Dorset ewes and 250 commercial sheep at Llangwathen, identified Zupreme as a potential winner at an early stage. “I always thought he could be the right sheep, but you just don’t know how they will turn out until you start feeding them and shearing them. He’s very powerful and just handles so well.”

Completing Mr Lewis’s perfect day was his ewe lamb Pembroke Amaretto A9, which managed to take the champion female title as well. By Richhill Wallace and out of Pembroke S2, this poll ewe lamb was born in September 2017 and went on to sell for 700gns to Chesterfield-based THC Weston. “She was very correct in every way, with excellent presence,” said judge and society president Francis Fooks. He placed Robert Hole’s Sherborne Zest Z4395 in the reserve position. 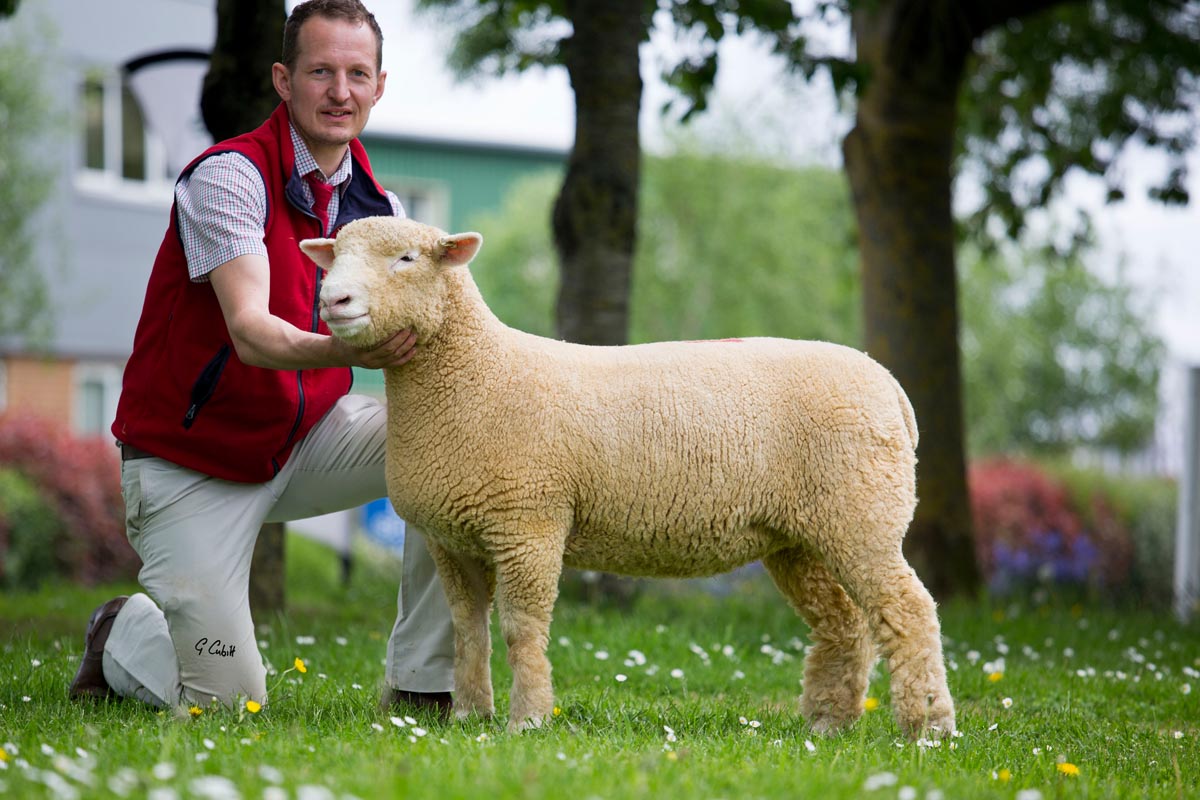 David Lewis with the Champion Female, Pembroke Amaretto, A9 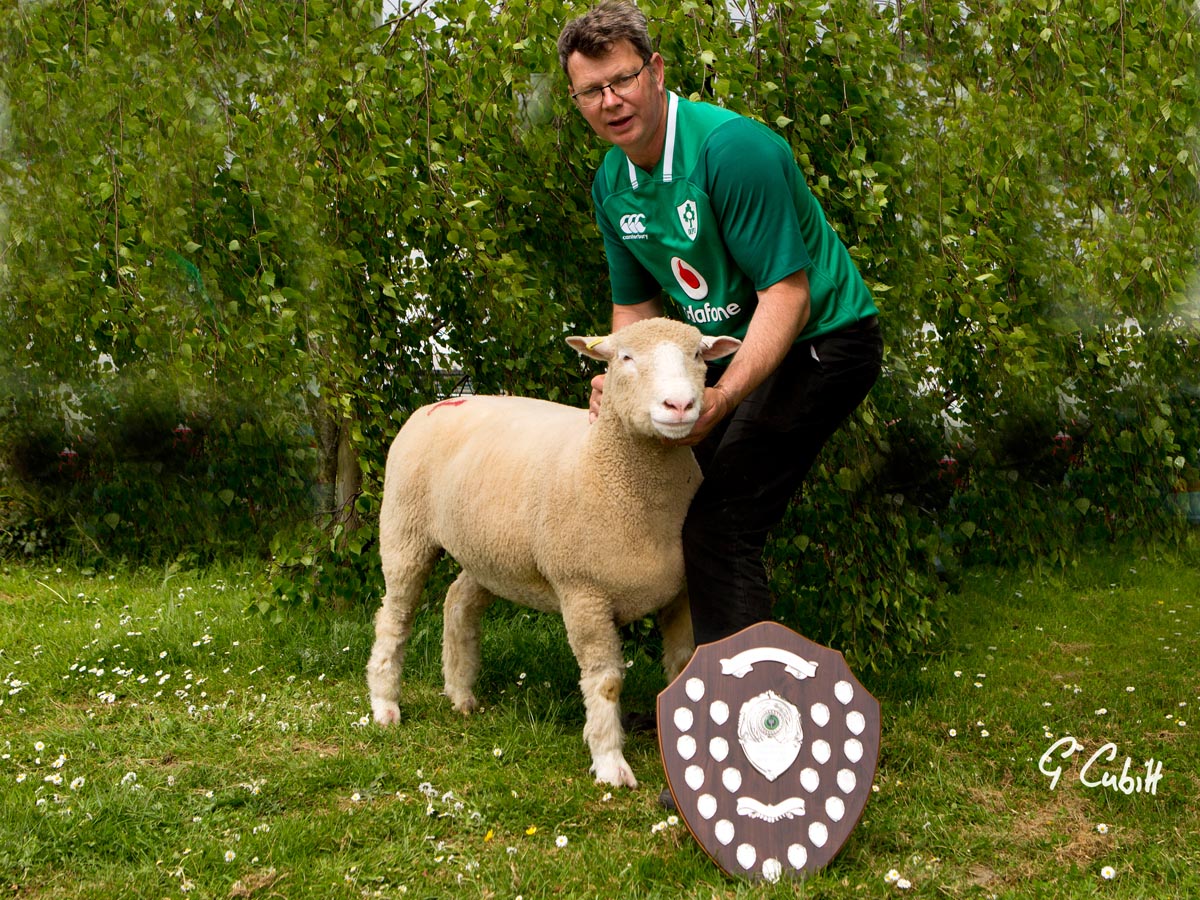 “To win the female and male championships in the same day is just unreal,” said Mr Lewis. “I’ve only kept Dorsets for nine years so I try and select the cream of the crop to bring here and get my name established.” 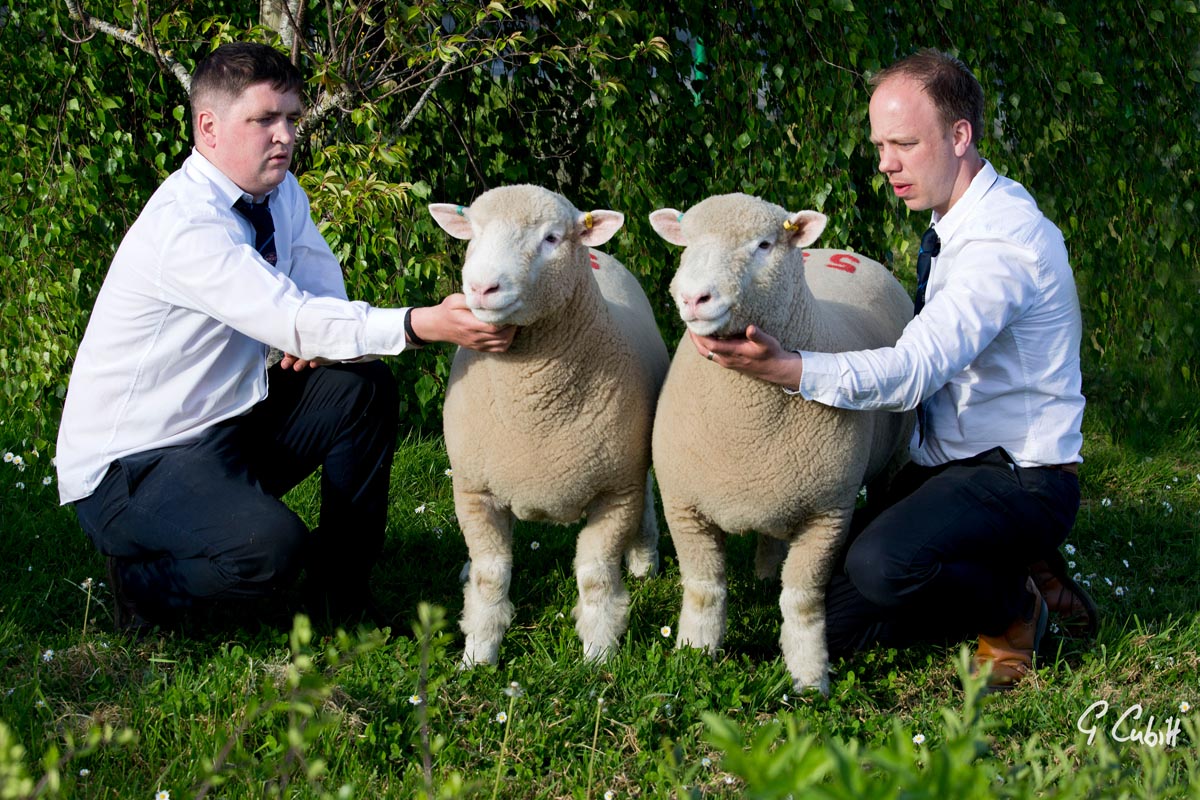 Reserve champion male went to a pair of polled sheep from Graham Cubitt’s Kildowney flock in Ballymena, which fetched 850gns and 1000gns, respectively. 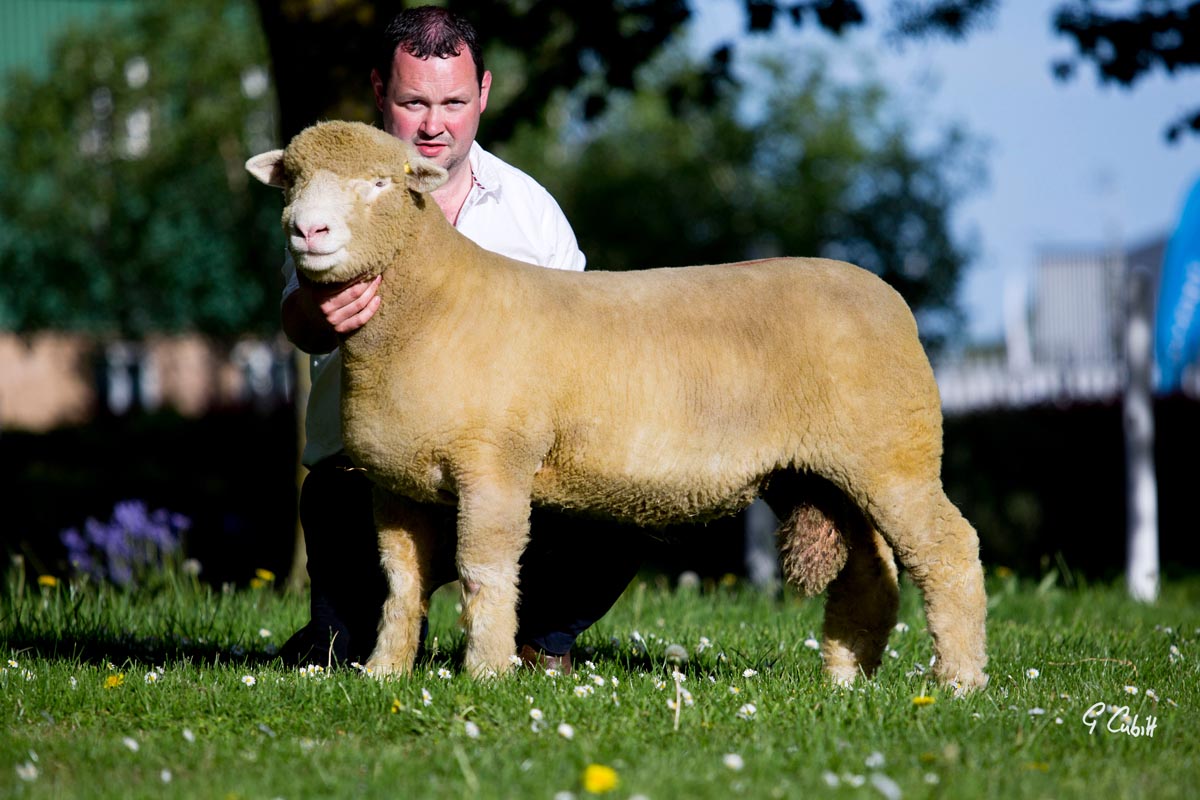 Seamus Mullan with Islaharnan Allstar, A220

The largest class, with 36 contenders, was the best single Poll ram lamb, judged by Alec Steff. He picked Seamus Mullen’s Islaharnan Allstar A220 as his champion, all the way from County Antrim, Northern Ireland. “He was very correct with good structure, legs and body,” explained Mr Steff. “He was good in the mouth and was of true breed type with a good back end.”

Allstar went on to sell for 1850gns to Grantham-based Henry Tickler. 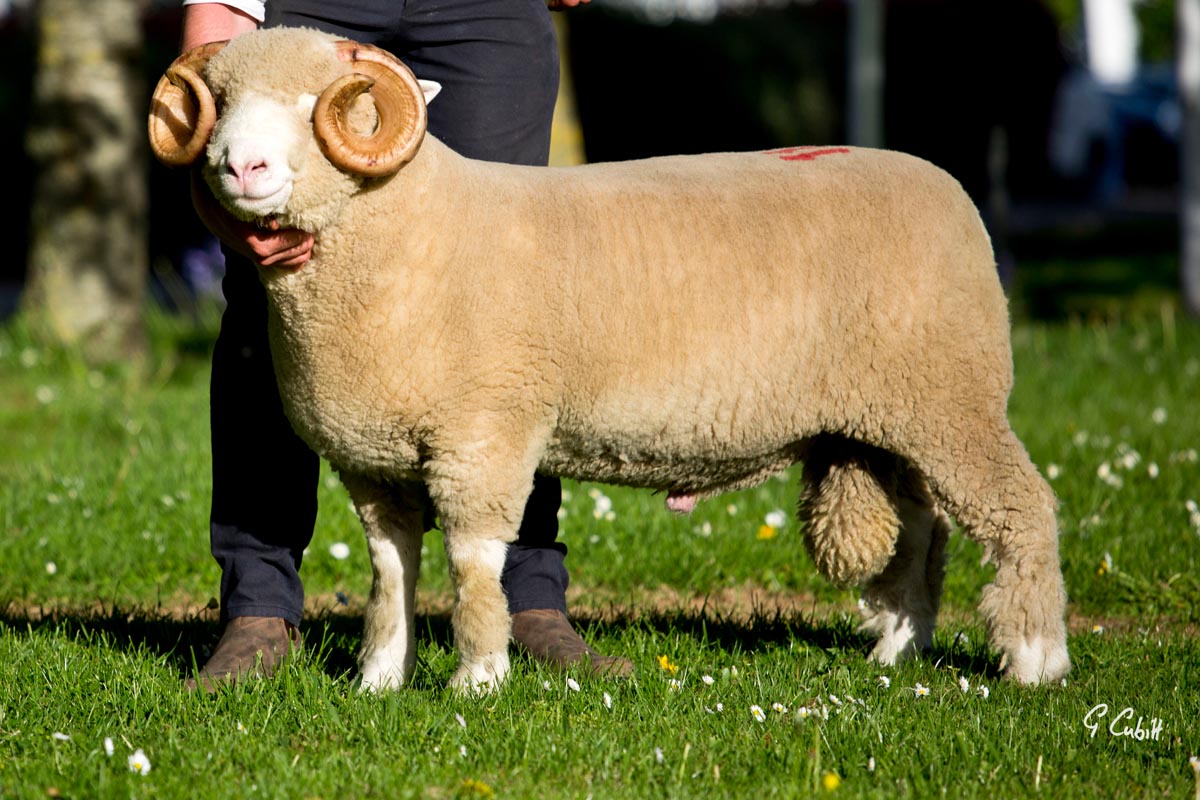 Ben Lamb with Richhill Axel, A1022

The best single horn ram lamb went to Ben Lamb’s Richhill Axel A1022, which travelled over from County Armagh and commanded 1450gns from Malcom Pugh. “He had a tremendous head with wide width between the horns, which came out level and curved,” said judge Denis Rankine. “He also had good legs and a great body – he was a very good sheep for the breed.”

The Richhill Flock’s best pen of rams with from left James Royan, judge, and Ben Lamb

Mr Lamb also had success in the best pen of five or more rams, judged by Mr Royan. “It’s the first time we’ve won this award. It can be hard to win with a horned ram in a pen of polled rams, as they often don’t match,” said Mr Lamb, who bought his first Dorset Horn at the Exeter May Fair when he was 12 years old. However, Mr Royan praised the even group of rams. “They all handled tremendously well with strong breed character coming through.” 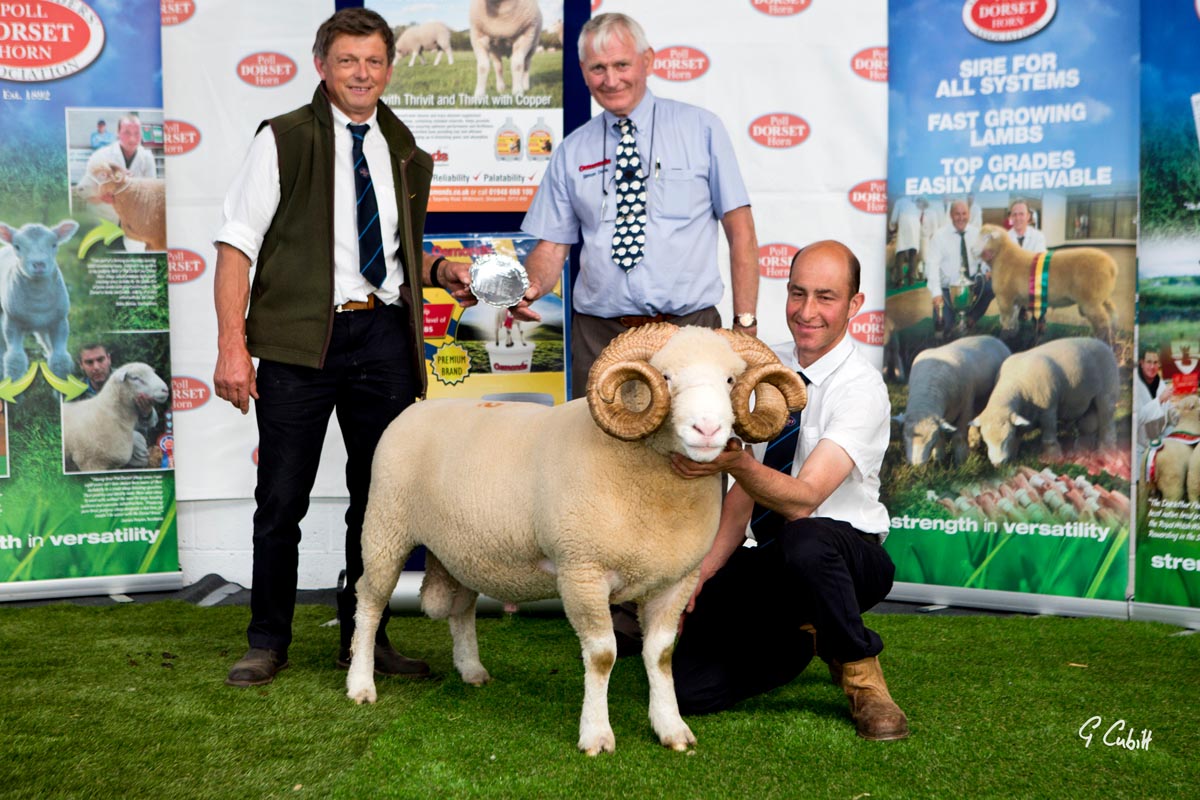 In the ewe section, Philip Baker won the best pen of ewes, which went on to sell for £150. Robert Hole won the ewe lamb prize, with a pen of five levelling at £270. 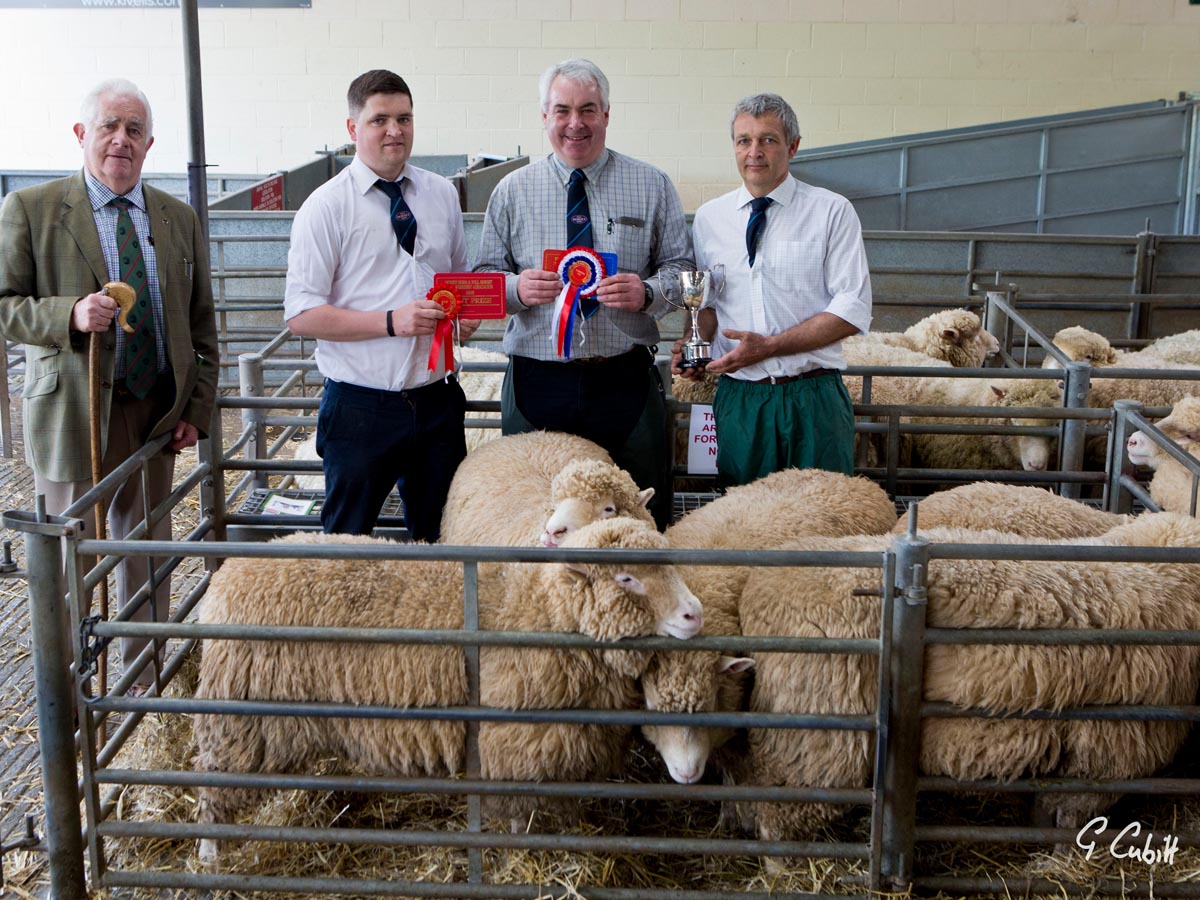 In the unregistered commercial section, Ivor Prouse’s pen of nine ewe hoggets fetched £200 each, with ewes topping at £138 for Andrew Palk. Purebred unregistered ewe lambs topped at £130 for Alan Bickley, while couples sold to £190 for C Hall. Crossbreds reached £162 for SP Burden. 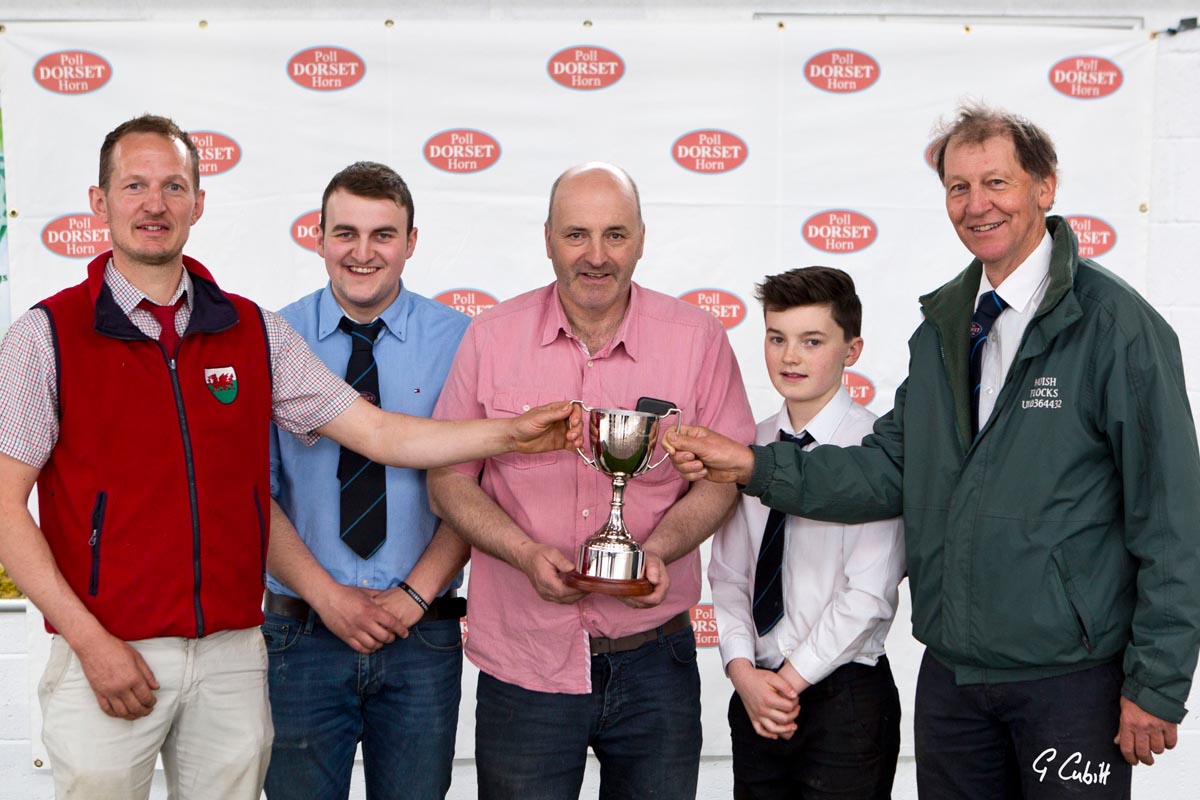