Averages were up on the year at the annual Dorset May Fair in Exeter on Wednesday May 3 with breeders prepared to pay for quality rams and females, backed by a steady commercial trade.

One of the largest sales in the UK for commercial early lambing ewes as well as pedigree rams and ewes, it provides an early barometer for the year’s forthcoming breeding sheep sale trade.

Association chairman James Royan, who lives near Berwick, said: “I’m delighted with both the quality of the stock forward and the level of interest which reflects an increasing interest in the Dorset breed. It was good to see the sale get off to a flying start with the first ram in the ring making 2,000gns.

“There was also strong interest from commercial breeders as well as in sheep from recorded flocks,” he added.

Kivells’ auctioneer Russell Steer said: “I was anticipating prices being up with the current sheep market - but only by around £3 to £5 a head but we have had increases of £25 to £30 a head in the commercial pens.

“Despite concerns about Brexit, there is still confidence in the sheep industry. Those selling cull ewes are still replacing them and there are new entrants. we had plenty of interest around the ring.

The three top priced rams were sold to Northern Irish breeders. Once again there was strong representation from Northern Ireland both in the numbers of rams and ewes exhibited and in the leading purchases.

There were 16 different exhibitors who brought with them 49 sheep.

West Wales breeder David Lewis, of Llangwathen, Narberth, Pembrokeshire had his best May Fair in seven years of exhibiting there, taking both the top ram price of 2,500 gns as well as leading the individual female section.

The family has been breeding Dorsets both commercially and pedigree since 1980 and James and Craig took over running the registered Ballyhammage flock in 2009, first selling at the May Fair in 2014. 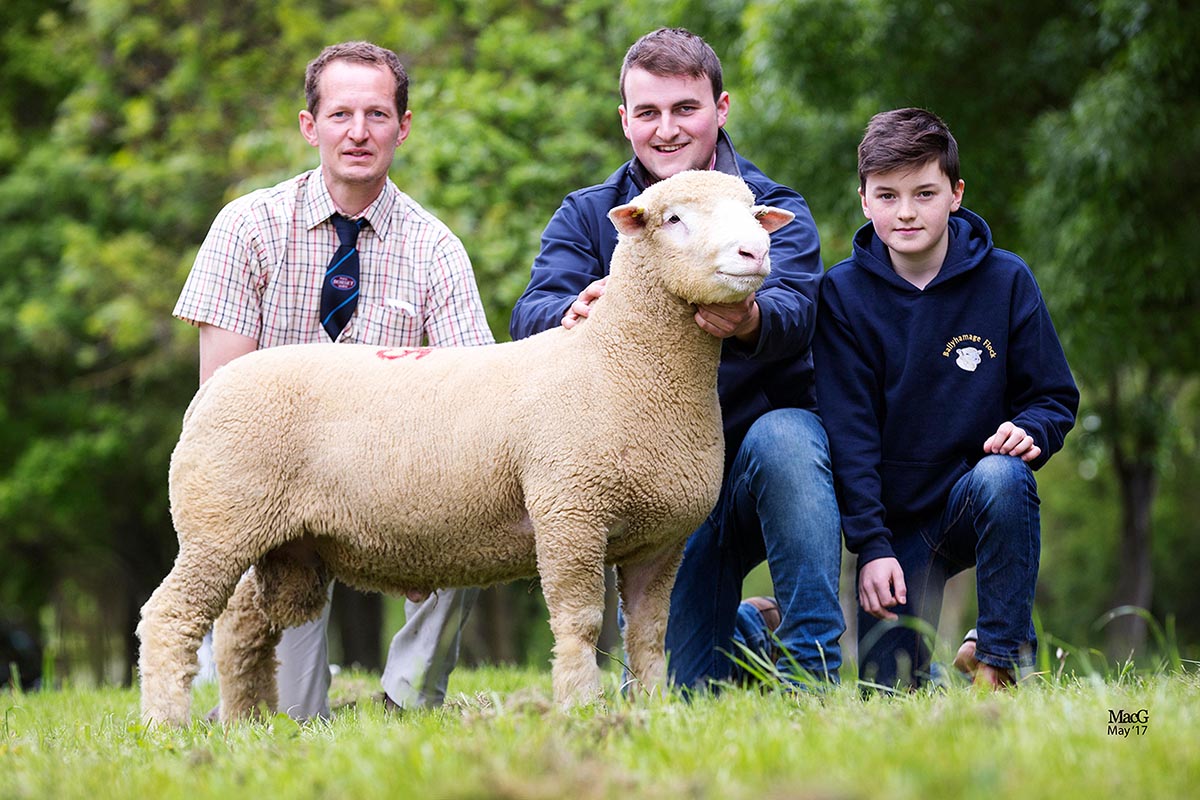 “He looked a big, strong lamb and he was long and stretchy. He was vey correct and alert,” said James. The brothers run 50 pedigree Dorsets which the purchase will be used on, as well as 500 pure commercial Dorsets which lamb three times in two years. They also have 400 finishing beef cattle.

The September-2016 born ram is by Ballytaggart Upstart out of a Pembroke dam. 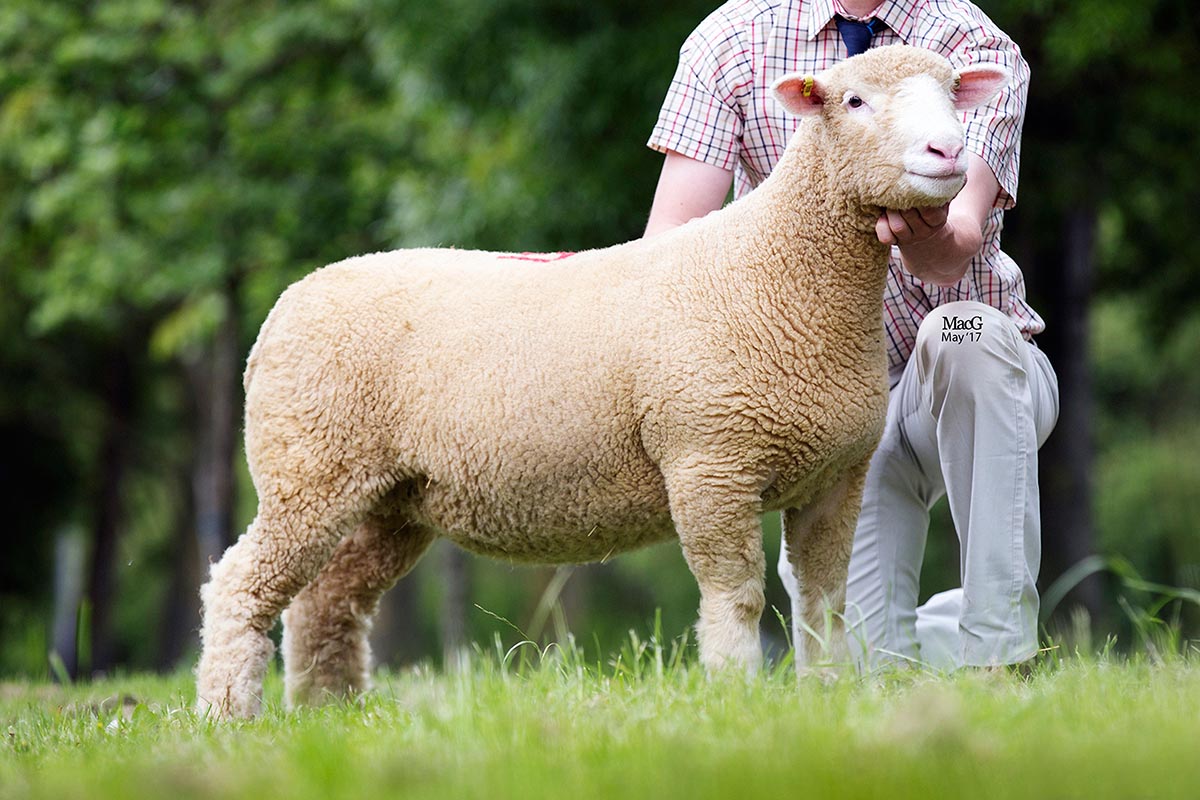 The flock also had the champion female lamb Pembroke Zara by Richhill Wallace which made 600gns but it was Pembroke Zest by Downkillybegs Xchequer which topped the sale of individual females at 620gns. This price was matched by the flock’s first prize shearling ewe, Pembroke Xeter by Downkillybegs Picasso. 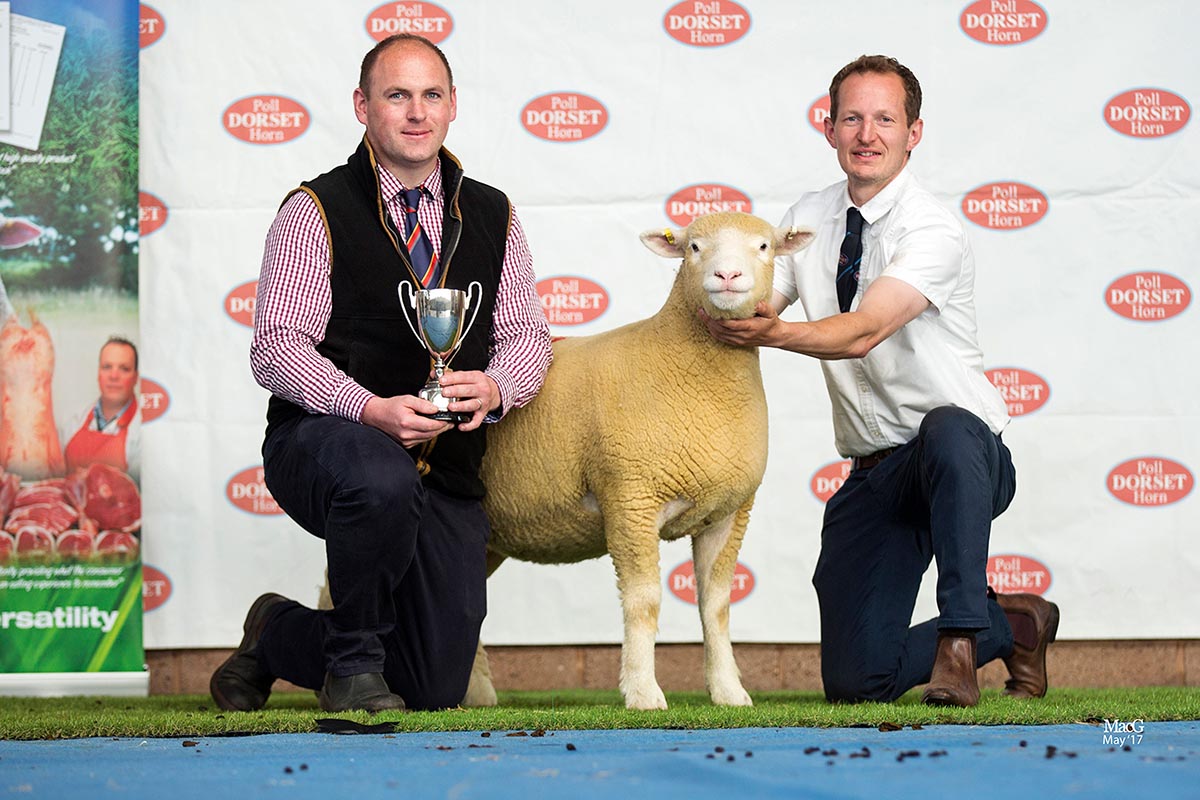 He established his flock with purchases of commercial in-lamb ewes at the 2009 May Fair. Two years later he returned to sell at the event.

“I had done a lot of homework and decided to go for the Dorset. I registered the flock in 2011 and now I have 280 Polled Dorsets, half of which are lambed in September and the remainder in the spring. We have plenty of grass on out lowland farm. Finished lambs are sold to local butchers.

“The Dorsets fit in well with our herd of 30 Charolais cross suckler cows, 250 commercial ewes, 40 Ryelands and 15 Texels. We are thinking of setting up our own meat business and the Dorset flock will probably be expanded and the commercial numbers reduced.”

The second highest price at 2,400gns was again paid by a Northern Ireland breeder for the horned champion. 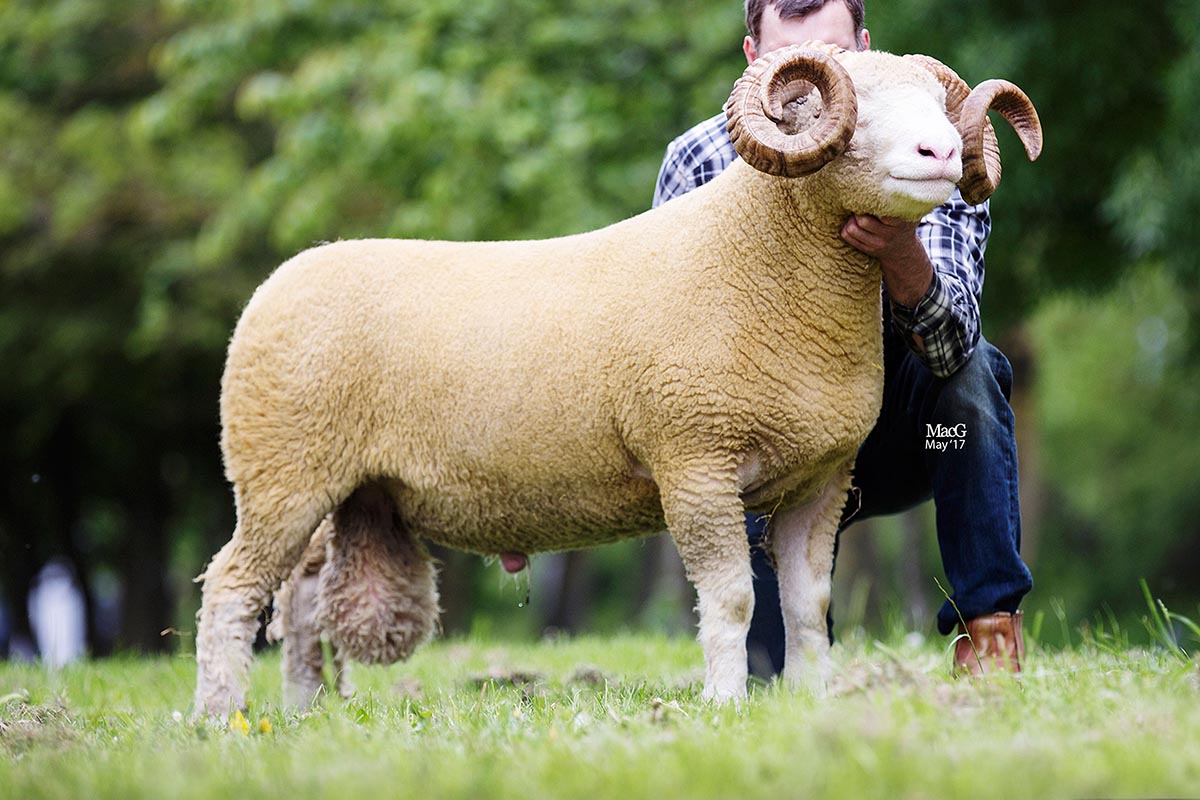 Cornish brothers Matthew and Adam Care doubled their previous best at the May Fair when they sold their ram Burhos Xtravagant by Sandy Lane Ultra which also topped the shearling trade to Gary Henderson, of Old Mill Cottage, Bushmills, Co Antrim, and his friend Norman Hammond.

The Cares run 300 ewes, which includes 60 horned females, in their flock at Burhos Farm, Burras, Wendron, Helston where Dorsets have been bred for three decades but have been registered since 2003. They also have 60 commercial continental suckler cows and 400 commercial ewes with North of England Mule ewes lambing in March producing replacements for the January lambing flock. The pedigree Dorsets lamb in November to produce shearling rams.

Each of the Irish breeders runs small flocks of Dorsets - Gary is area manager for an AI company. Norman runs purely horned ewes while Gary has a mix, partly because of his son Gareth’s interest.

Gary, one of the early Northern Ireland Dorset breeders who established his Sandelford flock in 1982, began breeding the horned sheep in 2010. 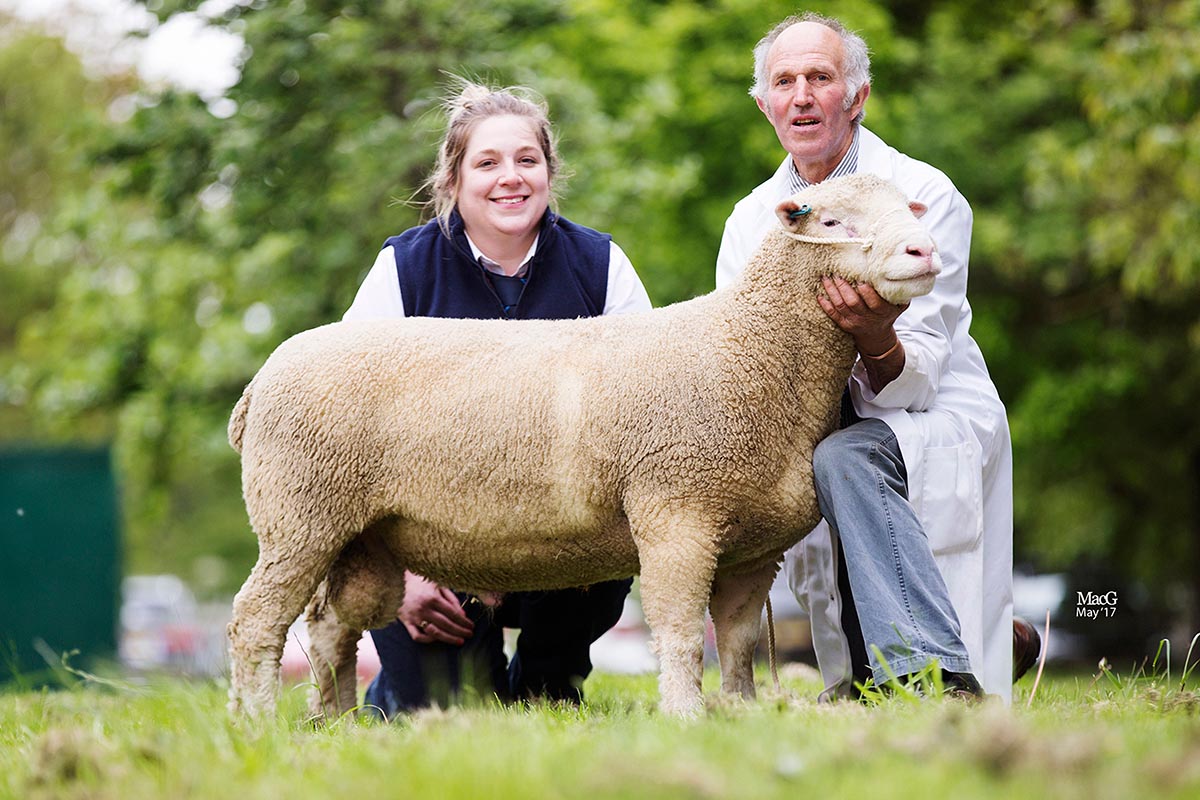 It was the first ram into the ring from Les French which made what was the sale’s third top price at 2,000gns. It was the best sale yet for the Wilsey flock which goes back more than 40 years at Higher Scarsick, Treneglos, Launceston, Cornwall for Mr French and his wife Heather.

While Wilsey Dorsets have been sold at the May Fair for more than 30 years, their previous top price was two years ago at 1,800gns. Another of the seven sold this year made 1,000gns.

They run 130 pedigree ewes alongside a herd of 150 black and white milkers, selling up to 40 rams a year as well as some ewes.

The shearling ram by successful stock ram South-Win out of a Wilsey ram was bought by Ballymena vet Laura Weir for her Lisnafillan flock at Gracehill, Ballymena. 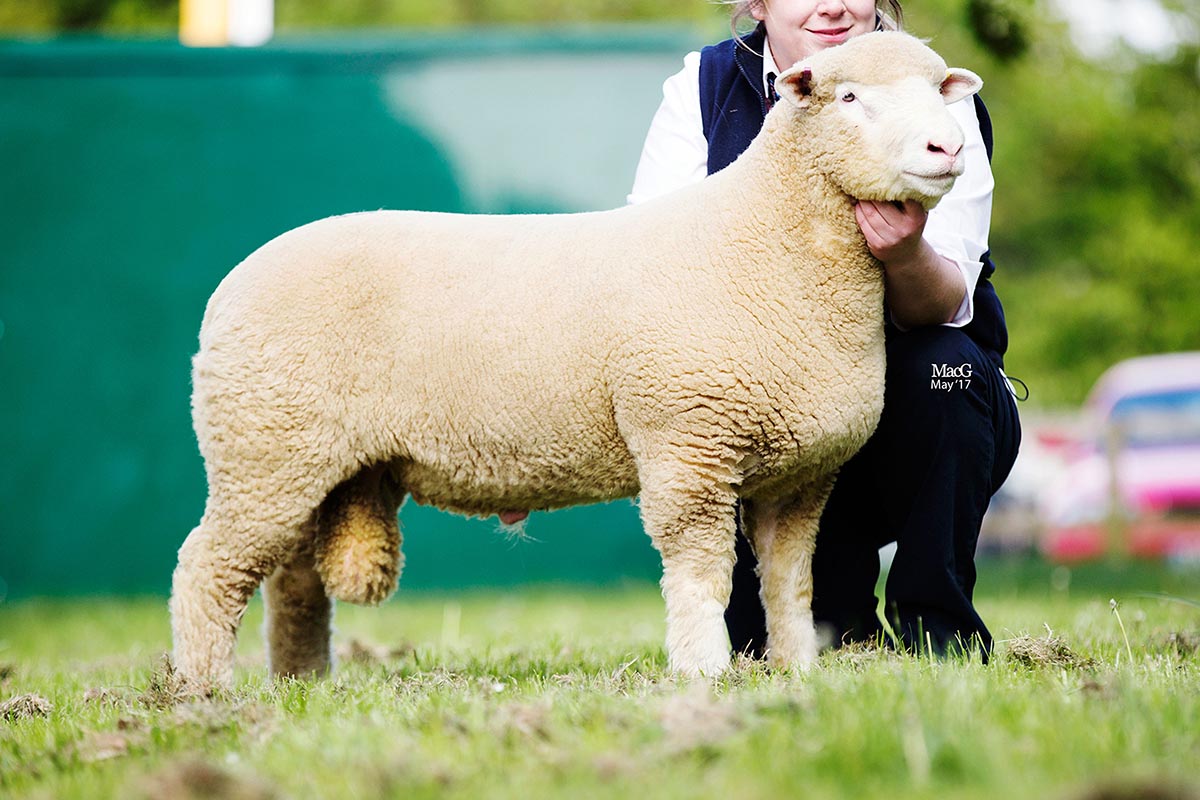 Her flock established in 2005 now numbers 70 pedigree ewes alongside 35 commercial ewes which she runs as well as working as a vet in a mixed practice in Ballymena.

“The breed is so versatile being able to lamb out of season with growth rates comparable to continental breeds,” she said.

She sold two home bred lamb rams to a top of 1,000gns for Lisnafillan Zayne by Downkillybegs Xander, the 10th highest recorded ram.

First of the two into the ring was lot 13 Huish Zeb from David Rossiter, a ram lamb by a Poorton sire bought at the May Fair in 2015 which has bred exceptionally well and out of a Huish ewe. The ram sold to Joe Larder, of Walden Acres, Sanford, Somerset.

R and D Huxter, of Welland Down Farm, Sanford, Somerset with their ram lamb South Ham Zambezi with virtually all South Ham breeding in its immediate pedigree with high breeding indices was sold to Mr Rossiter for the same sum.

Francis Fooks, of Fooks Brothers, Manor farm, Bridport, Dorset had a good trade for both individual sheep and ewes sold by the pen with their Poorton flock.

Three Poorton rams sold to more than 1,000gns. The top price of 1,700gns for a Beechmount Tweedle Dum sired shearling with a muscle depth of 3.8 and maternal ability of 3.11 sold to Cumbrian breeder Catherine Pritt. 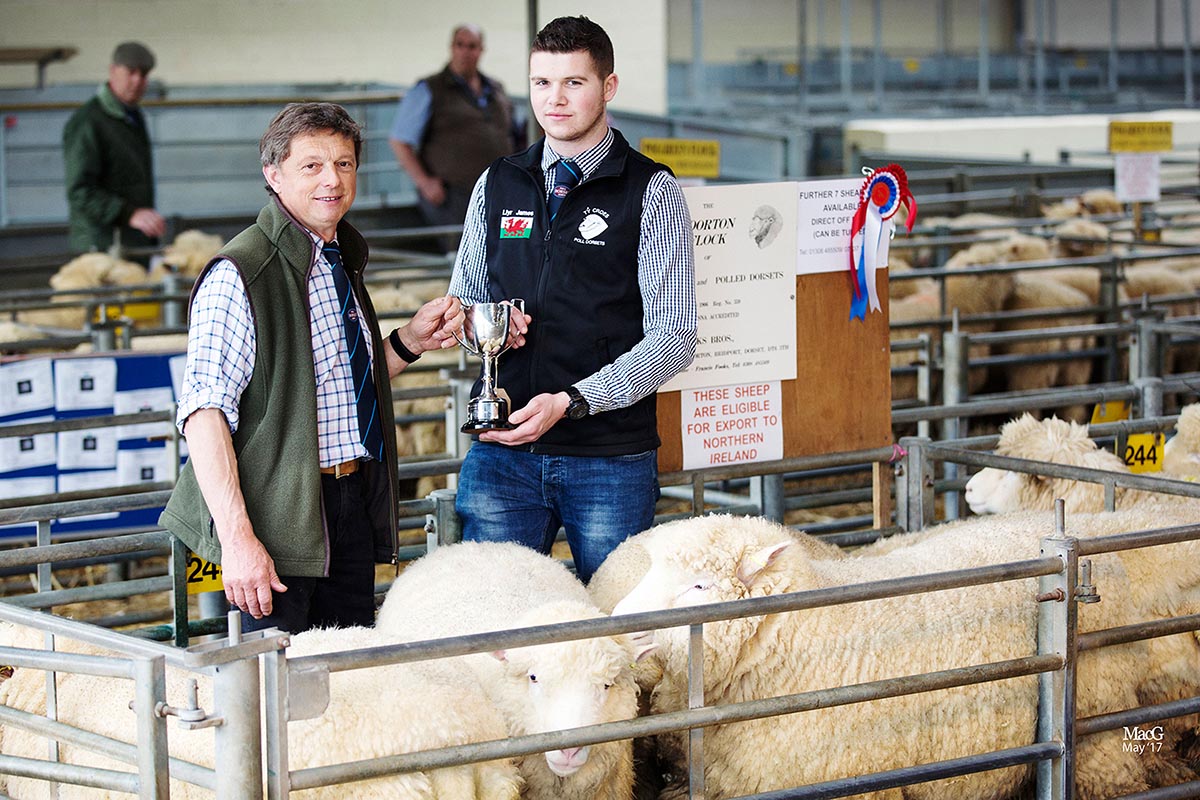 Second highest price was 1,600 gns for a shearling with Wilsey and Huish bloodlines.

They also had the champion pen of five ewes which were hoggetts and sold to an average of £275 per head with a further two pens of ewes lambs selling for £235 apiece. 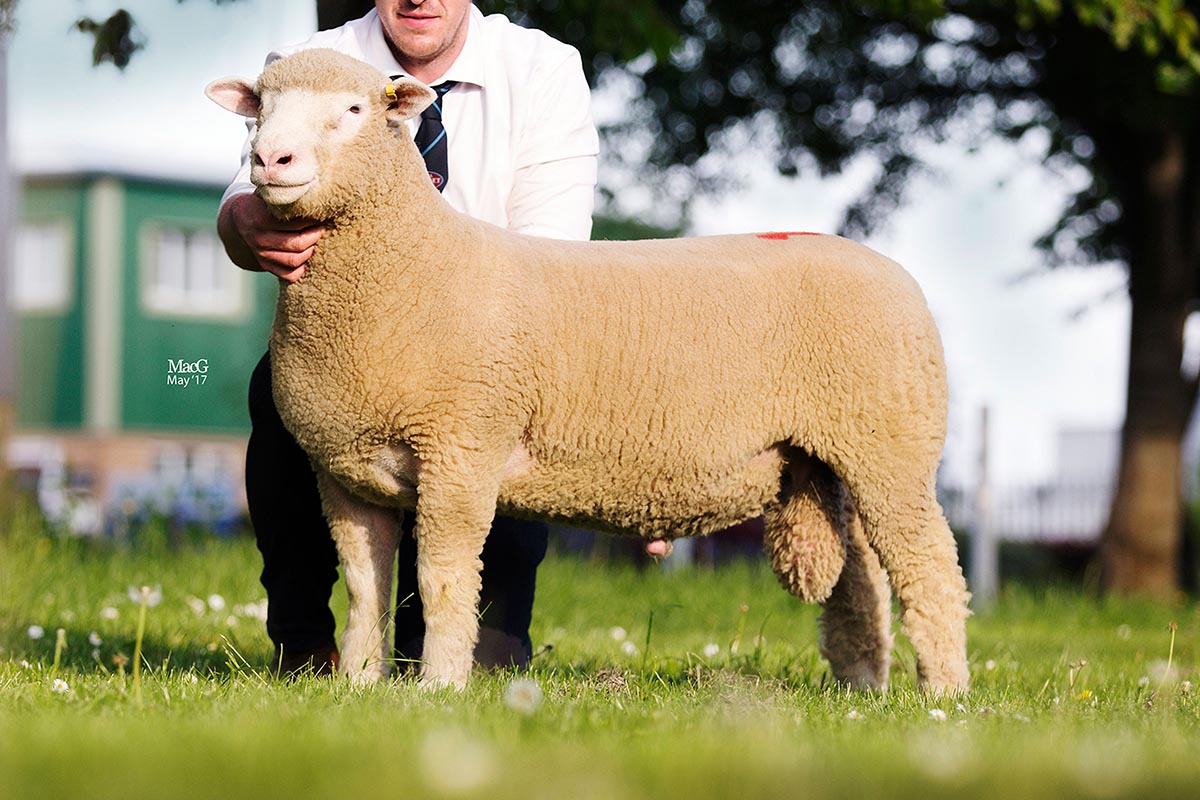 Sired by a a Sandelford ram, the lamb has a terminal sire index of 469 and a maternal ability of 2.23. 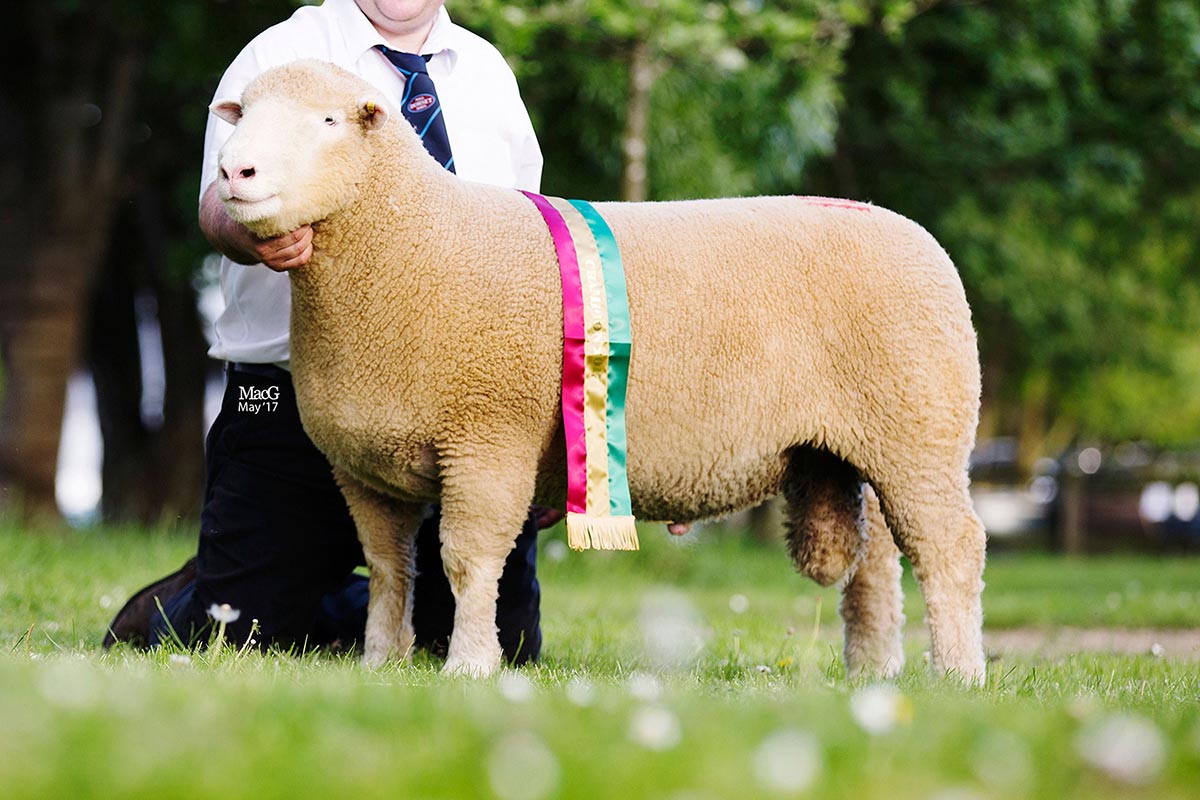 The overall champion, a shearling ram from Thomas Wright, of Ballytaggart, Ballymoney, Co Antrim, made 1,500gns - one of two from his flock and three in total.