Rams met a virtual clearance at the annual Dorset May Fair in Exeter Livestock Centre on Wednesday (May 7 2014) on behalf of the Dorset Horn and Poll Dorset Sheep Breeders’ Association, with six making 2,000gns or more and returning an increased overall average on the year.

Conducted by Kivells and Husseys, the sale is one of the largest in the UK for commercial early lambing ewes as well as pedigree rams and ewes and it provides a yardstick for the year’s forthcoming breeding sheep sales.

A relatively mild winter and buoyant trades for all types of prime and cull sheep helped encourage pedigree and commercial breeders to buy on Wednesday. 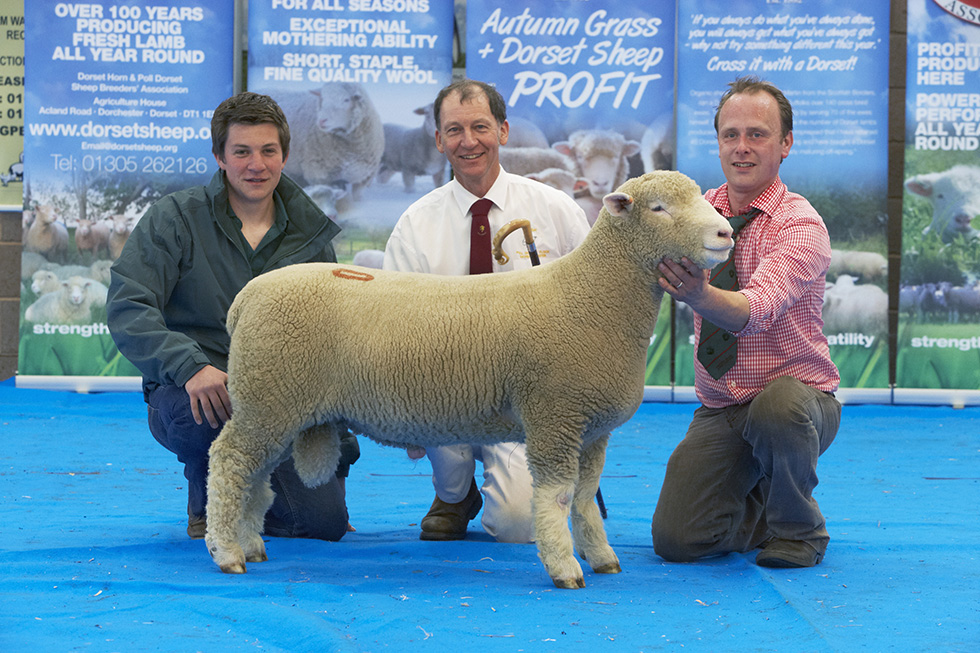 “The Dorset May Fair is generally seen as a yardstick for prices in forthcoming breeding sheep sales and with the trade for commercial sheep sales being stronger, this has been reflected in the sale and breeders and buyers have been satisfied with the result,” said society chairman Rob Hole.

“Very few rams left the ring unsold and there were sheep to satisfy breeders seeking the top genetics as well as commercial producers. There were a number of new faces among the buyers, with sheep selling to all four countries of the UK, as well as closer to home,” he added.

Auctioneer Simon Alford, conducting the third May Fair at Exeter for the society, opened the sale on a note of optimism: “Compared with this time last year, the prospects for the sheep industry are good. We are seeing tremendous returns for lamb, hoggs and barren ewes with the prime lamb average this Bank Holiday week as just short of £100 a head.

“Until very recently, we have sold more than half the new season lambs in the country through our centres, this being reflected in the influence of the early lambing Dorset flocks,” he added.

William Carson and his wife Karen, of Whitesides Road, Downkillybegs, Ballymena, Co Antrim, had the best sale in the flock’s 36 year history, both in the leading price and pen average of £2,747.50 for six rams, the latter being the highest average since 2006 with only Richard Currie’s 2013 average close at £2,555 for three rams. 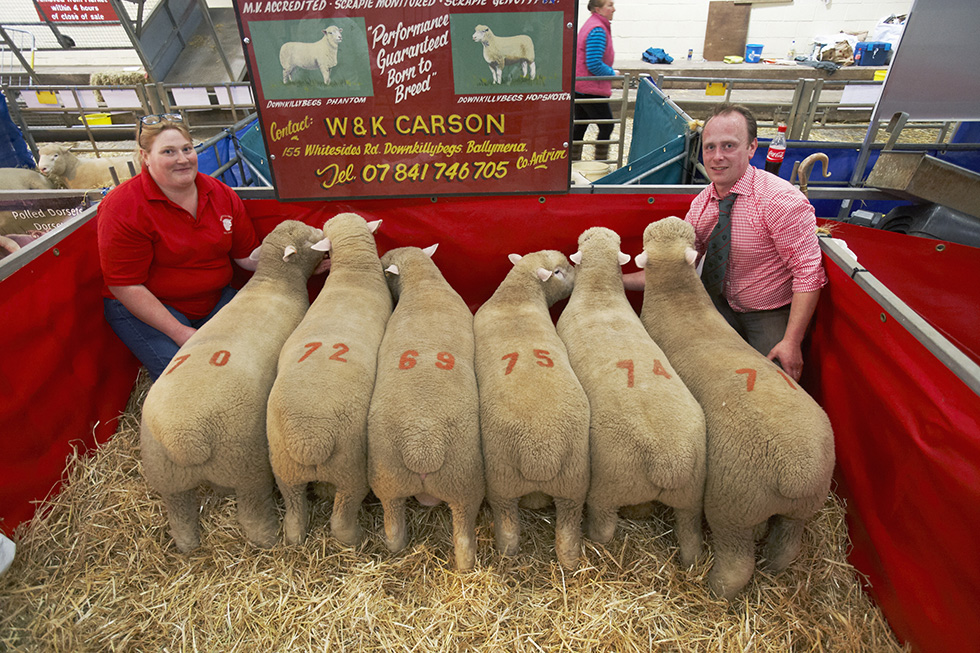 William and Karen Carson with their pen of rams

Leading the sale at 4,800gns was Downkillybegs Unique which carries the Myomax gene and scanned with a record muscle depth of 44.4mm.

The September 2013 born ram lamb is by Myomax ram Ballytaggart Puma which sired last year’s record price female at 950gns at the May Fair, and out of a Downkillybegs ewe. William took on the running of the Downkillybegs flock founded by his sister Annaleen in 1978 when she went to nursing college 28 years ago and sheep from the flock were first sold at the May Fair in 1998.

Unfortunately, the latest generation of Dorset enthusiasts, the Carson’s six year old son, Cameron, was unable to attend the May Fair this year because he was unwell, but one of his rams sold for 1,200gns.

“The flock’s best average to date was at the 2012 May Fair when we also had our highest price of 4,200gns which also sold to David Rossiter,” said William, who has been secretary of the Northern Ireland Club for 22 years. In the last decade the breed in Northern Ireland has increased in popularity fourfold, said William, currently with around 115 pedigree breeders.

“The Dorset is now my preferred breed and we are increasing flock numbers from 160 to 200 ewes because of the demand from butchers for Dorset prime lamb over other breeds and sales of commercial and breeders’ rams,” said William.

The flock, the main portion of which lambs in September, has been Signet recorded for three years and the Myomax muscling gene has been introduced to the bloodlines, both of which have helped generate extra interest from pedigree breeders, William believes. After purchasing the ram, David Rossiter who farms with his son Richard at Burton, Galmpton, Kingsbridge, said the ram’s sire had caught his eye when it was sold in Northern Ireland and since then William had had it tested for the Myomax gene.

“A ram is half the flock and quality is never expensive. This ram is in the top 1% for EBV and as well as its high muscle score and terminal sire index it has a maternal index of 249 and a plus for litter size. If the figures are right, it still has to be a very correct sheep which this is,” said Mr Rossiter, who runs 440 pedigree Dorsets alongside 860 commercial ewes. 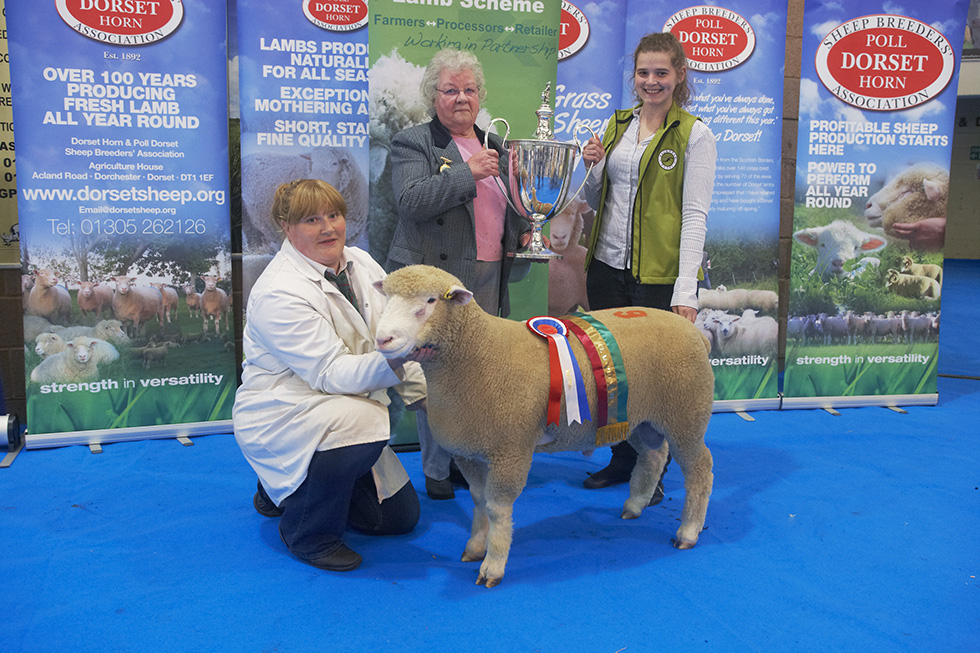 The overall champion at the previous day’s show judged by Mrs Doreen Price assisted by Rowland Davies, was also from Downkillybegs and it made the sale’s second top price of 3,500gns to father and son Jim and Joe Dufosee, who run 300 Dorset ewes in their Blackhill flock, 50 of which are horned and the remainder polls, at Farnicombe Farm, Upper Scudamore, Warminster, Wiltshire.

The lamb Downkillybegs Ultimate is by another Myomax sire Downkillybegs Tic Tac, the twin brother to the highest muscle EBV ram of the 2013 generation and the Carsons’ second highest terminal sire with an EBV of 444 points.

Keen to purchase rams with good figures, Brian Muncaster and Cathryn Pritt were underbidders on the top priced ram lamb. Ultimo had a muscle depth of 40.4mm at scanning and is full brother to last year’s reserve overall female champion. 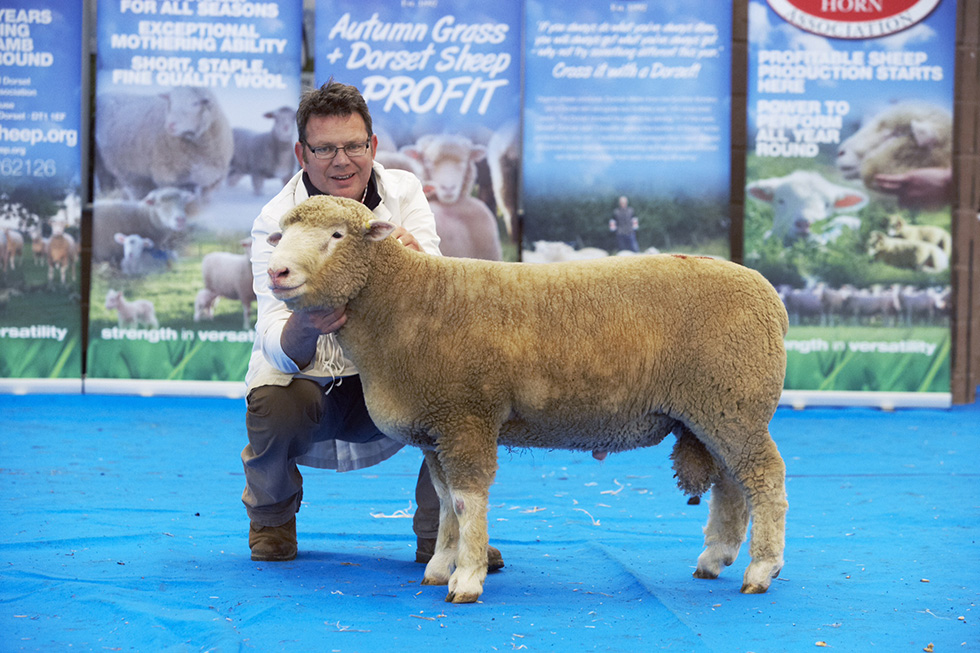 Another Northern Ireland breeder, Ben Lamb, sold the next highest priced ram at 2,300gns to breed society chairman Rob Hole, who runs 430 pedigree Dorsets in the Sherborne flock with his father Richard at Hill Street Farm, Holwell, Sherborne, Dorset in the heart of dairying country in the Blackmore Vale. “I saw the ram’s sire in Northern Ireland last year and liked him. The lamb is very correct and handles well,” said Rob. 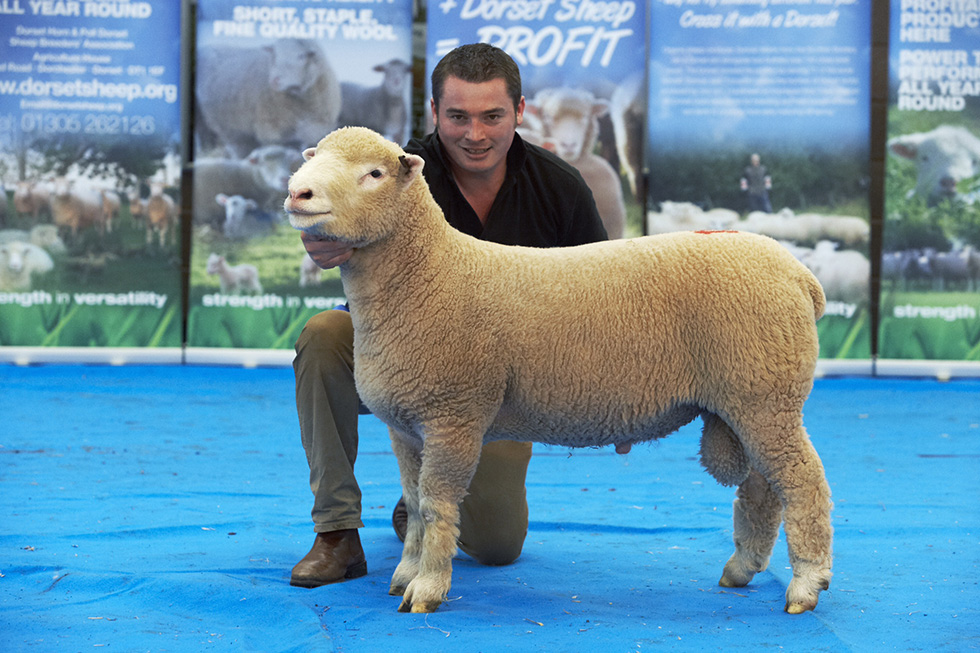 Closer to home, Tom Clarke, of Paddocks Cottage, Nymet Tracey, Bow, Crediton, Devon, had a successful pen from his 75 ewe flock, with six out of seven lots sold making more than 1,000gns to a top of 2,000gns for Manor Croft Utopia.

Mr Clarke also had the top price female at 700gns, the shearling Manor Croft Temptress by Rossiz Kanye West, a breed and interbreed show champion, out of a home bred ewe. She sold to Windrush Farming Partners, Cold Aston, Bourton on the Water, Cheltenam, Gloucestershire.

Tom also topped the sale of penned females when his five ewe lamb were awarded Reserve Champion pen and sold for £300 to MD & JMF Morris of Isle of Wight.

The champion pen of females came from father and son team David and Mark Thomas who run the Treguddick flock at South Petherwin, Launceston, Cornwall and are celebrating their 50th year of regular breeding. Their pen of five hoggets achieved £270 apiece again to Windrush Farming Partners.