The first entry of the ram lambs secured the top price of 1,100 gns at the annual show and sale for the Dorset Horn and Poll Dorset Sheep Breeders’ Society 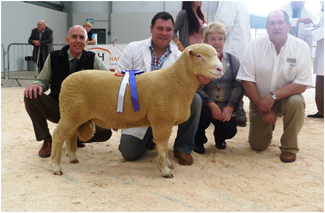 Northern Ireland Breeder Thomas Wright of the Ballytaggart flock based at County Antrim took the leading price tag of 1,100 gns for his November, 2011, born entry, Ballytaggart Saxon.  His full brother sold at Ballymena Premier Sale held in July this year and a full sister is retained in the flock.  Saxon is a son of Ballytaggart Premium and out of one of the best ewes in the flock.  He was successfully purchased by Sam Driver of Glossop, Derbyshire. 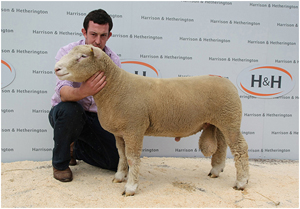 The Male and Reserve Supreme Champion entry from Thomas Wright of Northern Ireland followed next in the price listing selling for 600 gns.  Ballytaggart S114, a December 2011 born ram lamb is sired by Downkillybegs Nitehawk and goes back to Downkillybegs Jethro on his mother’s side.  This lamb now travels to Cornwall for V P, M & A Care of Helston.

Also reaching up to the four figure mark at 1,000 gns. was a sole lamb entry from Ben Lamb of County Armagh, Northern Ireland.  Richill Stallone, an ARR ARR ram sired by Downkillybegs Pegasus and out of Granagh N19 mother, carries the Myomax muscle gene.  He was sold to Marianne Sheed for her Strathbogie flock based at Huntly, Aberdeenshire. 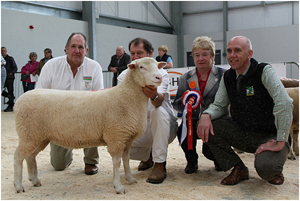 Heading up the female classes at 700 gns was the events female and supreme champion, a ewe lamb shown by David Rossiter of the Huish flock based in Devon.  This lady is a Bennachie Nimrod bred daughter who sold with a maternal index of 280 and sire index of 265, and mothers breeding carries Blackhill Kipper.  She was purchased by T W Holland of Cardigan, Ceredigion.

Also coming from the Huish flock of David Rossiter and selling for 540 gns was the top priced shearling gimmer entry.  She is a daughter of Hilltop Lloyd and carries the Downkillybegs Humdinger pedigree in the mothers breeding line.  She sold in lamb to Bennachie Nimrod and also joins her pen mate to go to Wales for T W Holland.

One lot earlier and from the same pen came the next female price at 500 gns.  This entry carried the same sire and dam line breeding and also in lamb to the Bennachie ram, she also travelled on the same transport for T W Holland.

Also coming in at 500 gns. was the last gimmer to go through the sale ring which was an entry from David Lewis of Narberth, Pembrokeshire.  This was a daughter of Polgreen Lloyd and out of a Weston bred mother by Sandelford Dynamite.  She sold in lamb to Downkillybegs Picasso and was knocked down to Louise Crowther of Bromyard, Herefordshire.