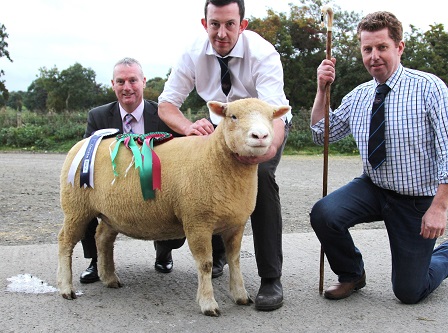 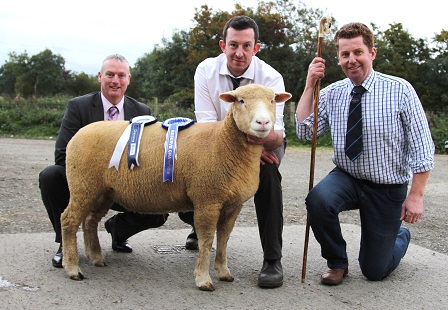 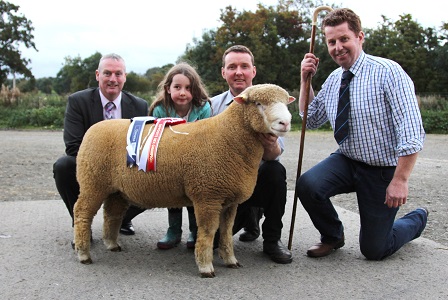 Judge for the evening was Mr Gary Henderson of the Sandelford flock in Bushmills and the show and sale was kindly sponsored by Danske Bank, represented by their Agri-business manager, Seamus McCormick.

Champion of the show was an aged ewe entered from the Richhill flock of Mr Ben Lamb, Armagh. This ewe sired by Downkillybegs Pegasus and out of the consistent breeding Granagh N19 ewe was scanned in lamb to the 900gns ram, Sandelford Usain. She fetched the second highest price of the evening of 500gns to Andrew Knox, Dromara for his Braeview flock.

The Richhill flock also secured the reserve champion exhibit at the sale with an in lamb shearling ewe. Sired by the English ram Manorcroft Thunder, who was placed 3rd in the individual stock ram class at the Northern Ireland flock competition and out of another Granagh ewe, she later realised a figure of 360gns to D Stevenson, Ballymena.

Achieving 750gns and the highest figure of the sale was a December born ram lamb entered from the Hilltop flock of Mr Richard Currie, Ballymena. Bred out of the 950gns myomax gold gene carrier Downkillybegs Trudy and an 1800gns ram from the Wilsey flock in England purchased by Richard at the May Fair, Exeter 2015. This lamb placed Opposite Sex Champion by the judge was purchased jointly by W&K Carson and Amy McConnell for their Downkillybegs and Beechmount flocks respectively.

Ewe lambs sold to 360gns, again for an entrant of the Richhill flock. Sired by Sandelford Usain and out of a stylish homebred ewe, this lamb was purchased by C, D & J Knox, Dromara, for their newly established Annford flock.

T & S Knox of the Riverview flock, which was recently placed second small flock in the UK, achieved a figure of 350gns for their 3rd prize ewe lamb. This lamb was out of a ewe which was champion ewe at Balmoral in 2015 and bred the 3000gns ram lamb Riverview Wasabi. She is making her way to a new home in Ballymoney with M & C Patton for their Tullybane flock. Ben Lamb realised 340gns for another Sandelford Usain sired ewe lamb, purchased by A Morton, Lanark, Scotland. The second placed ewe lamb entered by Richard Currie realised 300gns to W Magee, New Buildings.