The earlier part of the day was given over to the judging of the different Classes and this was ably accomplished by Judge Mr Matt Care of the Burhos flock, having travelled from Cornwall to undertake the task. Each Class entry was keenly contested with top quality animals being brought forward for judging. 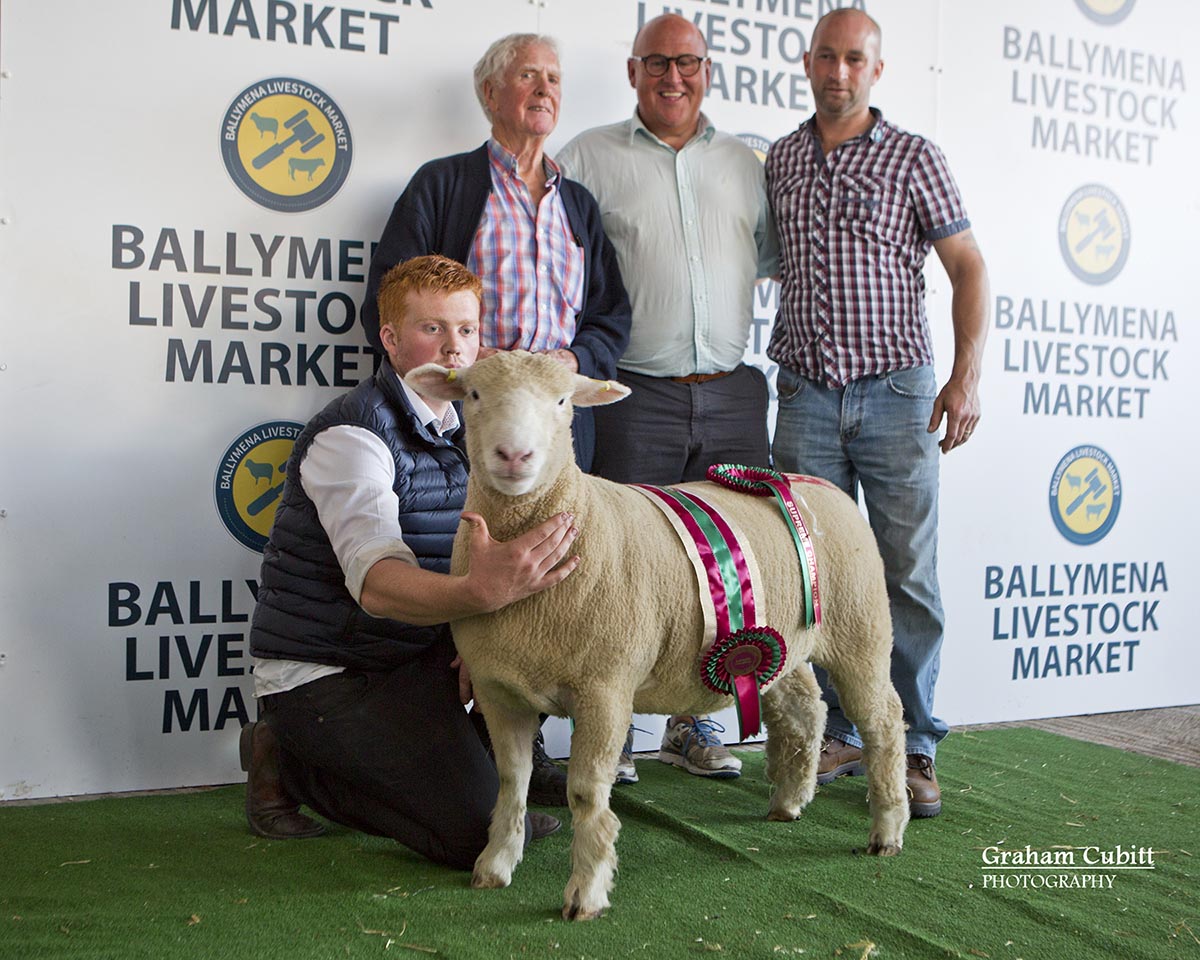 Following careful consideration Matt Care found his Supreme Champion in a superbly bred ewe lamb from the renowned Olivertree flock of Raymond Hill. This tremendously well formed and presented ewe lamb sired by Richhill UBank off an Olivertree dam later went on to sell for a Dorset breed record of 4000 guineas, being purchased jointly by Mr R Fitton of Dynamite flock and A Steff of Waggoners flock, both hailing from Lancashire.

Mr Fitton, a relative newcomer to the Dorset breed is keen to establish and grow his flock using top quality animals.

In making his choice, the judge Mr Care commented that his choice of Champion possessed all the qualities of the Breed and was outstandingly correct in every way.

While the top price of the sale was achieved by the Champion ewe lamb of Raymond and Julie Hill’s Olivertree Flock, more four figure sums were to follow from the same ‘stable’. Respectively, the pick of this year’s crop from the Hill’s Olivertree flock were to go on to realise prices of 1800 gns, 1300 gns and 1000 gns for ewe lambs, reflecting their success at recent Agricultural shows such as Balmoral, Ballymena and Ballymoney.

The leading price in the ram lamb Class was an eye catching young ram lamb from the Ballytaggart Flock of Thomas Wright, sired by Ballytaggart Tonka, and following brisk bidding sold for 650gns to Laura Weir of Lisnafillan flock. 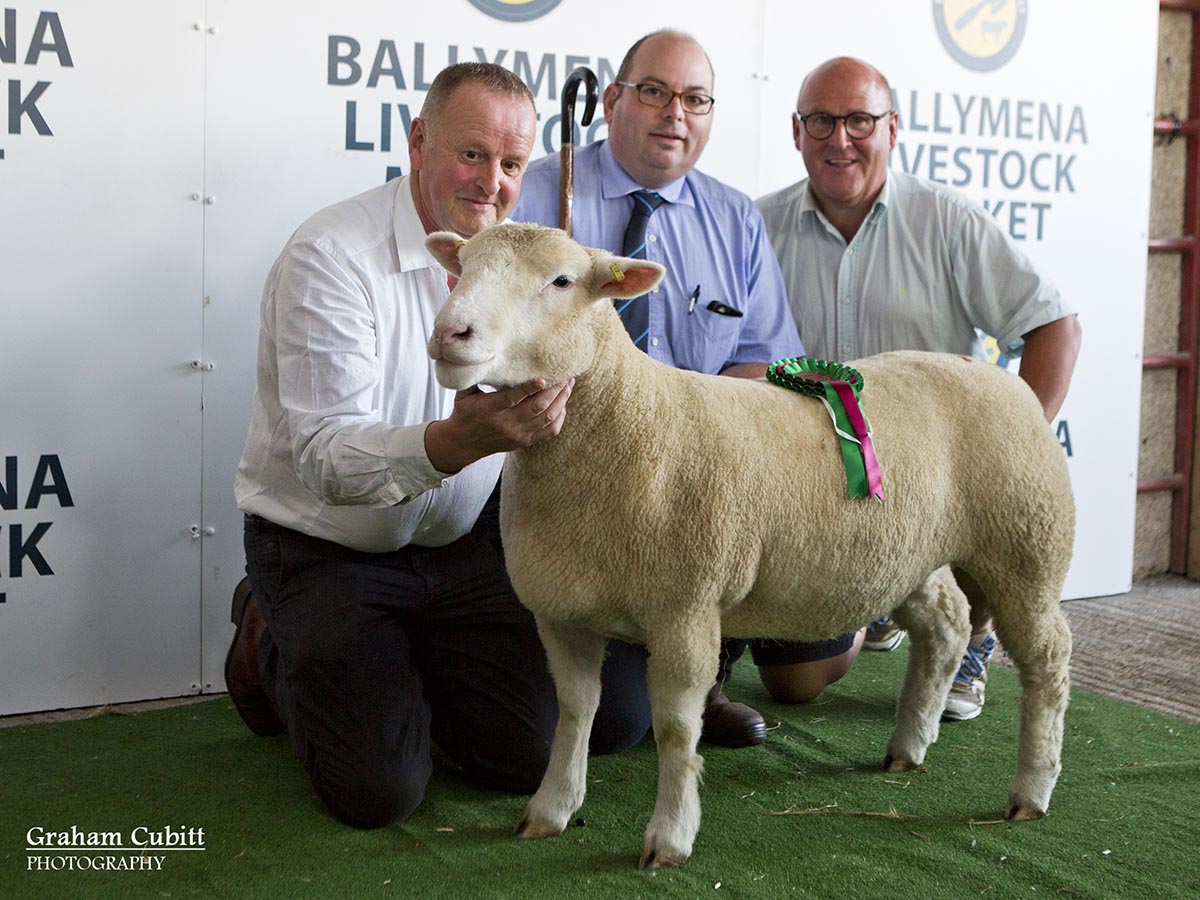 The Reserve Champion with from left David Hill, Gary Hanna, and Raymond Hill

The Reserve Champion was also from the Olivertree flock, a ewe lamb from the same sire as the Champion, another Richhill U-Bank daughter off an Olivertree dam, again a fine example of the breed having come 1st in her Class at Balmoral show.

This ewe lamb sold for 1300 gns, being purchased by Gary Hanna of Mae flock.

The Champion Horn Dorset was a ewe lamb shown by Cameron Carson of the Mainevalley Flock and sold for 360 gns to Mr Colin Johnston, Island View flock. 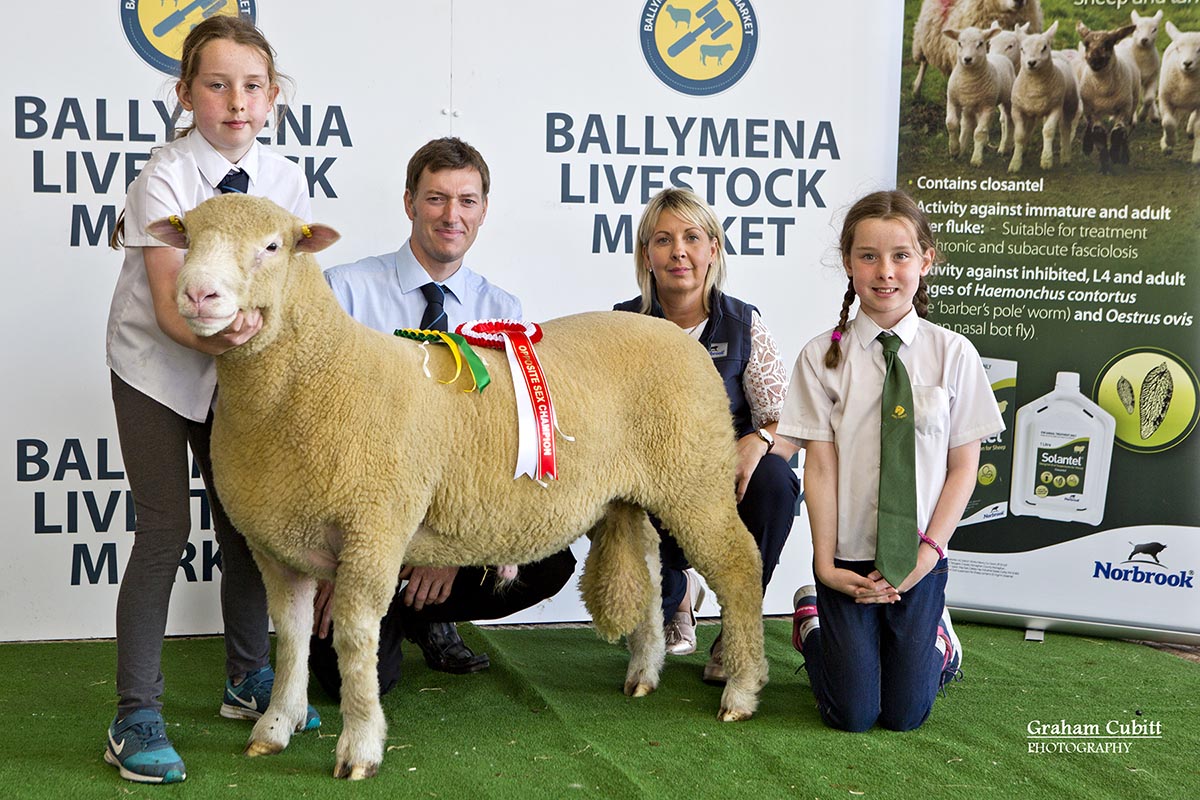 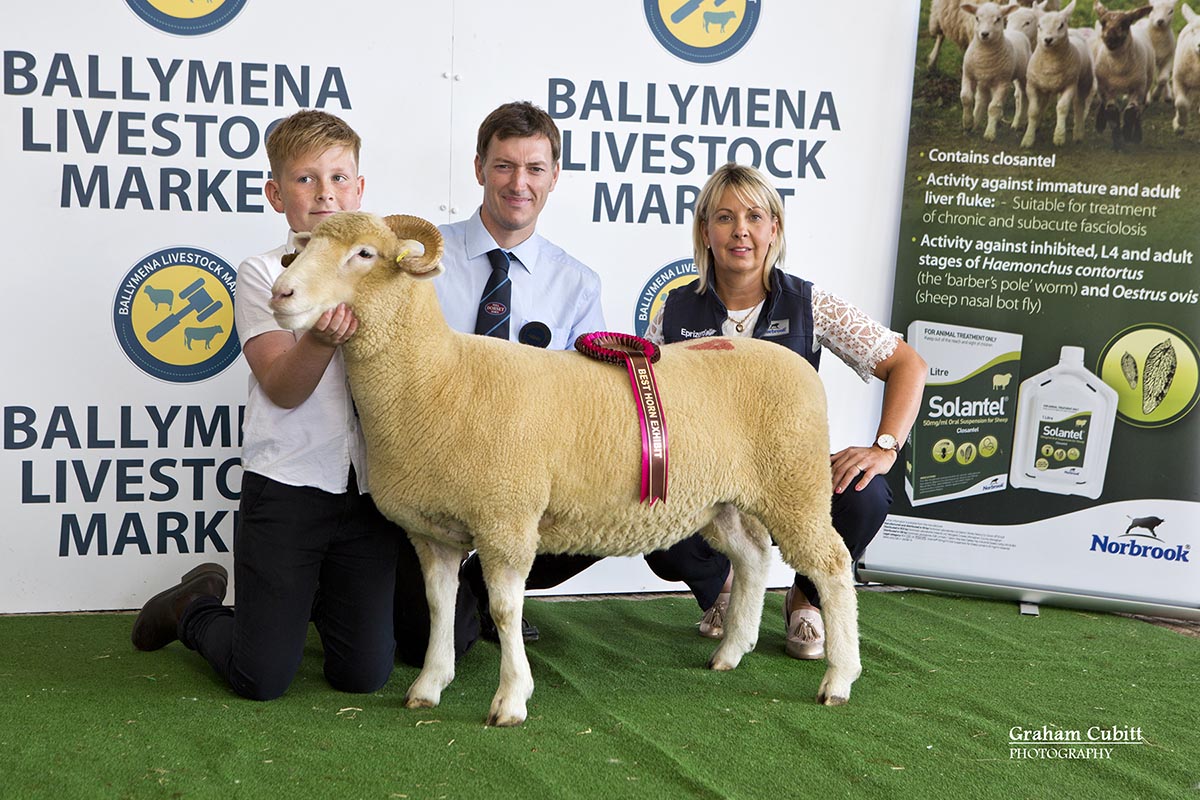 The Club would wish to record its’ appreciation to Mr Matt Care of Burhos Flock for his judging of the event and to Norbrook for sponsoring the Annual Premier Show & Sale Prizes, and many thanks to Jacqueline Hamilton for representing the sponsors on the day. Thanks also to J.A McClelland & Sons for their professional and efficient management of the Sale.

The NI Dorset Club would wish to commend the Breed for its qualities, both in the pedigree sector and its ease of lambing, fast growth rates and finishing in the commercial sector and acknowledges the keen custom for the animals presented at this Premier Show & Sale.

The next sale organised by NI Dorset Club members will be held in Hilltown on Friday 10th August with the Show at 12 noon and Sale commencing at 1.30 pm. This is an EU Export Sale and will offer new and established Breeders the opportunity to purchase top quality stock.