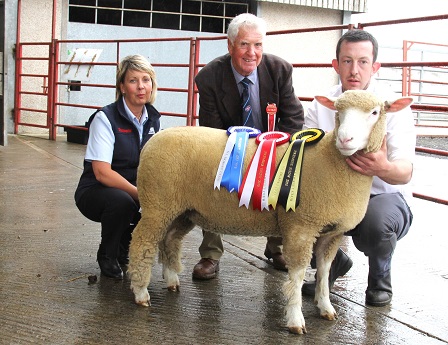 On Monday the 27th July the NI Dorset Club held their 43rd annual July show and sale in McClellands Livestock Mart, Ballymena. Once again the premier sale was very kindly sponsored by Norbrook Pharmaceuticals, who were represented at the show by Jacqueline Hamilton. Despite the recent down turn in sheep trade and low morale amongst the farming community in general this year, the premier sale was strongly attended demonstrating the popularity the Dorset sheep have gained in the province. There was a hive of activity throughout the penned sheep and the packed sale ring ensured rigorous commercial and pedigree trade, with all who attended witnessing a new NI breed record being set.

The record setter was the first placed ewe lamb and reserve champion presented by the highly respected breeder Ben Lamb’s Richhill flock, Armagh. This ewe lamb exhibited great size, strength and length and was part of Ben’s successful 2015 show team. This year was the first time any of the Richhill show team had been offered for sale. Her sire Ballytaggart Trojan was champion exhibit at the Carlisle show and sale in 2013 and her dam by Olivertree Samson was also shown successfully as a ewe lamb. A flurry of bids ensued and she was eventually knocked down for 1400gns to the longstanding Downkillybegs flock of William and Karen Carson, Ballymena, with our judge Mr Alec Steff of the Waggoners flock in Burnley, Lancashire the under bidder. This sets the record for a Dorset ewe lamb sold in NI, with the previous highest price paid in 2011 at the July sale for a ewe lamb presented by Richard Currie’s Hilltop flock for 780gns. It was only two months ago that another exceptional ewe lamb presented by Tom Clarke’s Manorcroft flock in England at the May Fair in Exeter was purchased for 1450gns by another Northern Irish breeder, Samuel Caldwell, Rasharkin. Again this reflects not only the strength and quality that the Dorset sheep has reached, but also the popularity of the breed and the determination of the NI breeders to have the best of the genetics available. 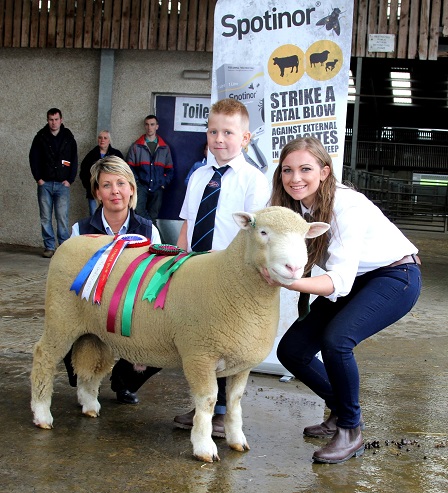 Our supreme champion of the show was lot number 27, the first prize winning ram lamb presented by Master Cameron Carson’s Mainevalley flock, Ballymena. This was a Downkillybegs Taz son with great breed character, which also proved very popular in the bidding, eventually being sold for 720gns to David Lennox, Cookstown, who was also the under bidder for the top price ram lamb. Leading the way for the ram lamb trade was a smart September born lamb presented by the Hilltop flock of Richard Currie, Ballymena. This lamb was knocked down for 820gns to English breeder Sam Driver for his Sandy Lane flock of 400 Poll Dorset ewes in Derbyshire. Next was an 800gns ram lamb exhibited by Thomas Wright, Ballymoney, placed 4th in the strong line up, he was sold to established breeder G Lyons for her Kilmandil flock in Dunloy.

Senior rams were also on offer, with Sharon and Trevor Knox, Armoy selling the first prize winner, a high index recorded ram for 680gns to Thornbank Farms, Cumbria. Following our record price ewe lamb, the second highest price was reached by lot 91, a first prize winner in the pair of ewe lamb class and progeny group shown by Raymond and David Hill’s Olivertree flock. This ewe lamb was purchased for 500gns by K&L Weir for their Lisnafillan flock in Ballymena. The third highest price for a ewe lamb was also paid for an exhibit of the Olivertree flock, as 480gns was paid for their lot 89, also a part of the first prize winning progeny group sold to M Hodgson, Cumbria. The Olivertree flock had a highly successful sale of their pen of 6 ewe lambs, which averaged at 365gns. 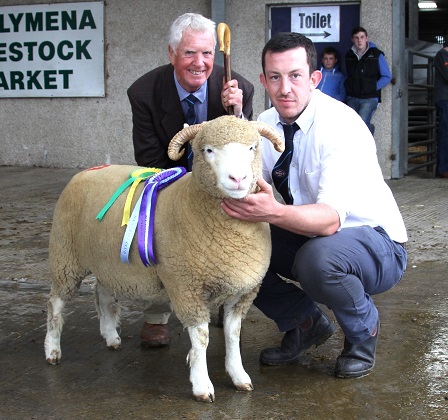 The champion horn exhibit was also shown by Ben Lamb. This was an October born triplet ewe lamb, which was also part of Ben’s 2015 show team and was knocked down for 300gns to William and Karen Carson, Ballymena. A small selection of shearling ewes were presented with the second prize winner, lot 144 of Sean Paul McCarry, Armoy which was scanned in lamb to Sandy Lane Tiesto, sold for 410gns to J McClure, Dundrod.