Wednesday, 22nd July saw the second annual Scottish Dorset Breeders’ Club sale at United Auctions, Stirling. What can only be described as an unusual sale held in these unprecedented times, it was not possible to hold the pre-sale show and award prizes or crown a champion, strict social distancing was enforced with no viewing backstage. Instead the sheep were paraded through the ring immediately prior to start of the sale, which allowed potential purchasers the opportunity to both see and have a quick feel of the quality lots on offer. 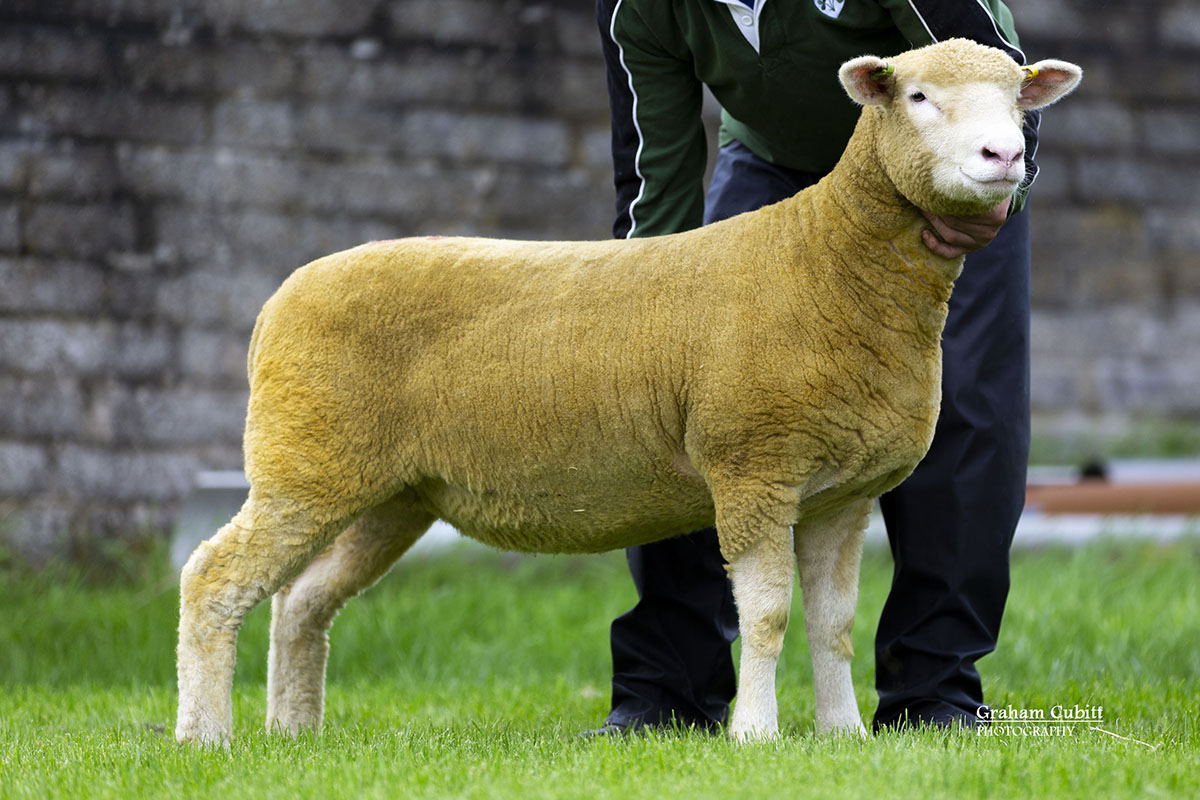 Female trade was good with an almost 80% clearance rate, with only a handful taken back home for another day. Top priced female was none other than an offering from top class breeders and last years show champion of champions, Andrew & Caroline Kennedy from the Maineview flock, Ballymena, Northern Ireland. Lot 35, a very classy December born ewe lamb, Maineview C1161 out of Maineview Armani and a homebred ewe achieved the fantastic price of 700 gns and was destined to go back to familiar climate in NI with Brain Moorhead, Ballymoney, Co.Antrim. The Kennedys also achieved 450 gns with another eyecatching ewe lamb from their tremendous pen. Lot 33, Maineview C1148 by Maineview Batman was purchased by Cheeklaw Brae Farming and headed to Duns, Berwickshire to join the Cheeklaw Brae flock. James Royan and the Bennachie flock equalled 450 gns with an outstanding ewe lamb, Bennachie C0020, sired by Downkillybegs Xenos out of a dam purchased from Ballytaggart at last years Stirling sale. This ewe lamb didn’t have far to travel home after the sale with Fiona Harley to join the Rumbling Bridge flock in Kinross-shire.

Unfortunately tup trade was somewhat sticky in comparison, perhaps due to the recent global pandemic people may have sought breeding tups privately earlier in the year due to the uncertainty of sales being able to go ahead. Despite this Andrew & Caroline Kennedy still managed to beat their own record from last year and set a new Scottish Breeders’ sale price of 1100 gns with lot 58 and their powerhose of a tup Maineview Chieftain C1134, sired by the same Ballytaggart After Shock who also bred the 1st and 2nd place ewe lambs at last years sale who both went on to fetch 1000 gns each. This topper of a tup lamb was also going back on the ferry to Northern Ireland, this time to Omagh, Co. Tyrone with Joshua Baxter to the Dunbreen flock. The Kennedys top price domination continued achieving 450 gns with lot 59, Maineview Cracker C1131 who certainly lived up to his name. Again sired by Ballytaggart After Shock but this time out of a homebred ewe, J. Hill of Wester Campsie, Kirriemuir took this promising tup lamb home. Richard Fitton also received a noteable price of 400 gns for lot 48, a January born shearling Dynamite Brave B2138. Sired by Poorton Zephyr out of a waggoners ewe, this shapey shearling was secured by I. M. Henderson, Kinfauns, Perth.

Thank you must be paid to United Auctions, Stirling, especially due to the difficult circumstances in ensuring the sale could go ahead safely and professionally. Special thanks in particular to Margaret Owens-Smith for her work organising the entries and catalogue and to auctioneer Raymond Kennedy for handling the proceedings on the day.

This sale could not have gone ahead without the hard work put in by the vendors who invested a lot of time and effort in to getting their stock in sale condition and along with all the registered buyers travelled from far and wide to show their support for the Scottish Breeders’ Club sale who are very thankful for making the event a success. The club would like to wish all purchasers the best of luck with their new sheep and hope to see everyone next year for what will hopefully be an even bigger and better sale.